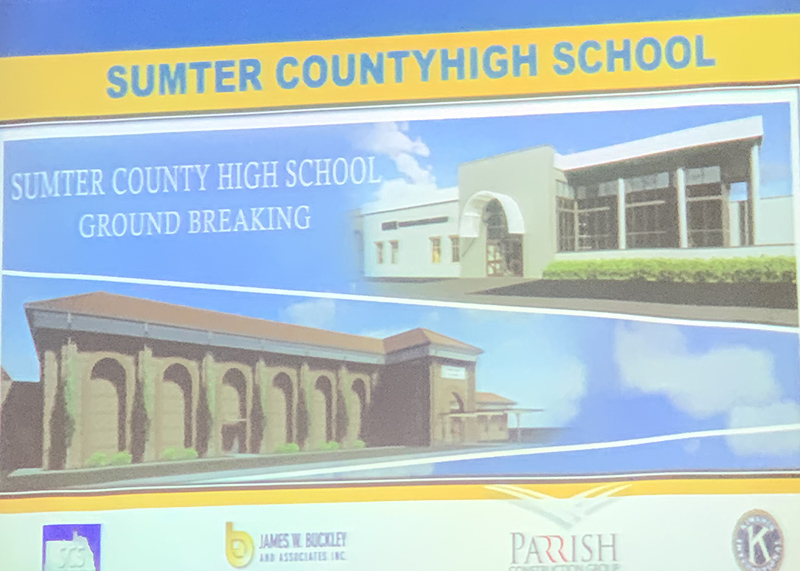 This is a picture of what the new high school will look like. This was part of a slide presentation done by Sumter County School Superintendent Torrance Choates, Ed. D, at the Sumter County Board of Education’s monthly meeting on Monday, February 10. At that meeting, Americus Mayor Barry Blount urged the BOA to keep the name of the new high school “Americus-Sumter High School”. Photo by Ken Gustafson

Retraction: In an article posted in the Wednesday, February 12 issue of the Amreicus Times-Recorder entitled “Mayor Blount asks BOE to keep the name of the new high school Americus-Sumter”, The author quoted Mayor Blount as saying “of the approximately $12.5 million school taxes that are collected in Sumter County each year, the city of Americus collects $5.4 million of those taxes, which is roughly 43 percent of all property taxes collected to operate the schools in Sumter County.”

The actual quote from Mayor Blount was as follows: “of the approximately $12.5 million school taxes that are collected in Sumter County each year, the city of Americus contributes $5.4 million of those taxes, which is roughly 43 percent of all property taxes collected to operate the schools in Sumter County.”

AMERICUS – Americus Mayor Barry Blount strongly urged the Sumter County Board of Education (BOE) to keep the name of the new high school as Americus-Sumter High School and to not change the name to Sumter County High School. Mayor Blount stated his case to the BOE at its monthly meeting on Monday, February 10.

The new high school is to be built across the street from South Georgia Technical College and is scheduled to be completed sometime either in 2021 or 2022.

“Over the last few months, we’ve had several citizens of the city of Americus express concern and those of the county, I might add, concern about the name change of Americus-Sumter to Sumter High School,” Blount said. “Some of the facts and figures that y’all might know already or be interested in, 55 percent of the population of Sumter County reside within the city limits of Americus. That’s over half the population.” Mayor Blount went on to say that of the approximately $12.5 million school taxes that are collected in Sumter County each year, the city of Americus collects $5.4 million of those taxes, which is roughly 43 percent of all property taxes collected to operate the schools in the county.

Blount went on to mention that Americus-Sumter High School won a girls’ basketball state championship back in 2016 and that the team was coached by an Americus High School alum.

“Some things that, I guess, really concerns me: since 2005, when the high schools merged and became Americus-Sumter, this year, you will add 16 graduating classes with Americus-Sumter on their diploma,” Blount said. “What’s going to happen to those kids’ diplomas? They won’t have a school to associate with. It will be Sumter High School. It won’t be Americus-Sumter. It will just be Sumter and all the people that had Americus High diplomas, we won’t have anything at all.”

Blount also said that the BOE should consider the costs of rebranding the school, as well as making a new logo and getting new uniforms. “That’s going to cost a lot of money,” Blount said. “ Blount went on to give other examples of county schools in the state of Georgia that have maintained their city name, such as Fitzgerald High School, Cairo High School and Bainbridge High School. “The last thing I will say is you can’t spell Panther without an A,” Blount said.

The BOE plans to have more discussion on the naming of the new high school at its meeting on Thursday, February 13. 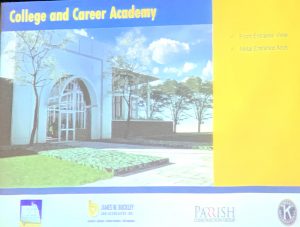 This is a picture of what the new College and Career Academy is to look like. It was shown during a slide presentation at the Sumter County Board of Education’s monthly meeting on Monday, February 10.
Photo by Ken Gustafson

Later on in the meeting, Sumter County School Superintendent Torrance Choates, Ed. D, along with CTAE Director Donald Gilman, Ed. D, gave a slide presentation on what the new high school will look like and the plans to enhance education in the future for Sumter County students. Dr. Choates also mentioned the situation with Furlow Charter School. “In September of 2015, the Sumter County Board voted for Furlow Charter School to be included in the district while they have their own governing board,” Dr. Choates said. “After five years of attempting to work together and to continue thriving, Furlow Charter has chosen a different path to become a state charter school. Therefore, they will be in total control of their own destiny.”

Dr. Gilman stated that the College and Career Academy will open several new doors for the county and its students. “One of the things, if you’re not aware of it, a House Bill a few years ago mandated that all schools teach Computer Science by the year 2025,” Gilman said. “This past week, I went to a STEM (Science, Technology, Engineering and Mathematics) conference in Thomasville and I was able to see how they incorporate that Computer Science program in from Grades 1 through 12.”

Dr. Gilman went on to say that with what is going to happen with the College and Career Academy, Sumter County should be right on pace with where it needs to be as far as education is concerned. “We’re looking right now at introducing Computer Science for the sixth grade in the intermediate school so that we can begin to lay the foundation,” Dr. Gilman said.

He went on to say that the plan is to use sheetrock walls in the school to make the facility more flexible, which will make for better curriculum pathways and a better working relationship with South Georgia Tech.