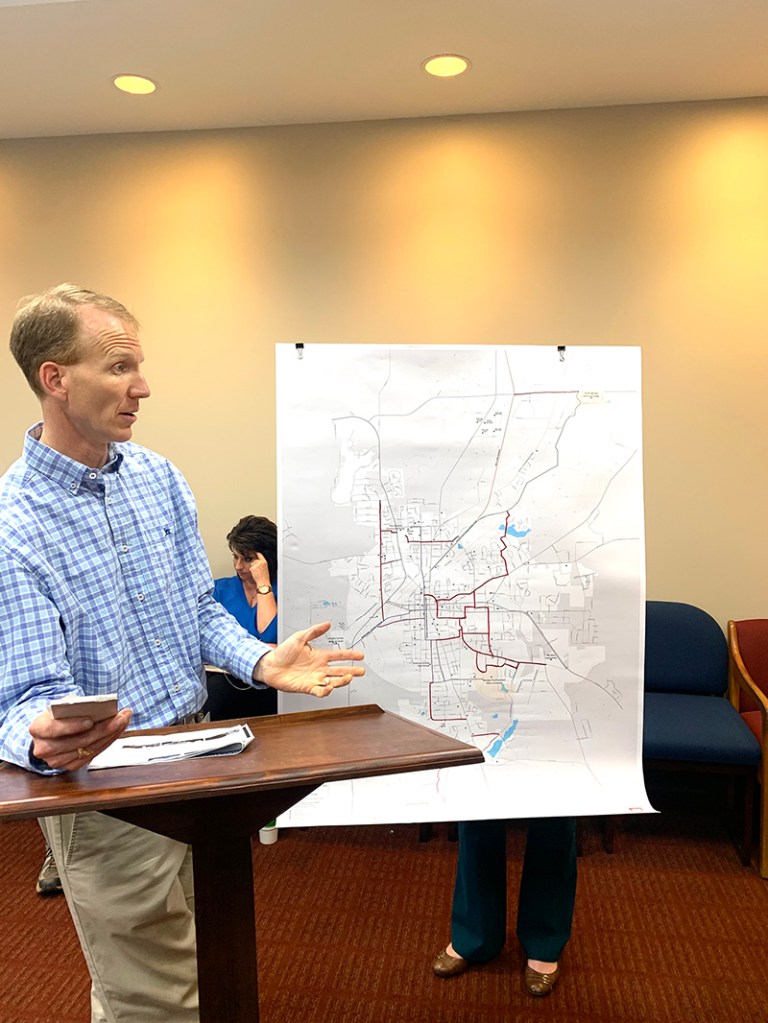 John Morgan of Sumter Cycling shows a map of a proposed series of bike routes that would connect the city of Americus with other parts of Sumter County at the Sumter County Board of Commissioners Work Session on Tuesday, February 11. The red lines on the map are the proposed bike routes. Photo by Ken Gustafson

AMERICUS – The Sumter County Board of Commissioners (SCBOC) got to here a presentation about proposed new bike routes that would go through Americus and other parts of Sumter County. Sumter Cycling representatives Ryan Iafigliola and John Morgan, along with Jill Hohnecker of the River Valley Regional Commission (RVRC), made the presentation to the SCBOC at their monthly work session on Tuesday evening, February 11, at the Sumter County Courthouse.

“We just wanted to come and talk to you about some ideas that we have that we are working towards in this area,” Iafigliola. “We’re talking about, truly, some initiatives that are bigger than just the city of Americus.” Iafigliola went on to say that he, along with Morgan and Hohnecker, wanted to introduce some ideas and dreams that they have to connect Sumter County via bike routes for the purpose of attracting tourism, as well as helping people to get exercise and to get to where they need to go. “We’ve seen in many parts of the country where they build bicycle trails that property values go up and that’s because a lot of people like to ride a bike,” Iafigliola said.

He went on to state that bike riding is for all ages and that the most popular age group for cycling is retirees. Iafigliola also touched on the fact that a lot of people in Americus and Sumter County get around on a bicycle because that is the only mode of transportation that they can afford. “We’re taking that into consideration in the way that we’re drawing out these plans,” Iafigliola said. He also mentioned that as many as 150 people from places like Atlanta, Columbus, Florida and Alabama come to Americus to participate in the “Prison to Peanuts” bike ride, which is a ride that takes place in April of every year. It is a ride that goes from the Andersonville Civil War POW camp to Plains.

Iafigliola went on to say that the long-range vision is to connect different sides of the community together. “Our dream would be to have a connecting route all the way from Boone Park all the way down to the rec fields,” Iafigliola said.

Iafigliola mentioned that the city of Americus commissioned Alta Planning and Design, a national organization that specializes in cycling and pedestrian planning and design in communities across the country, to do a study and come up with ways to make cycling pedestrian traffic more feasible in Americus. “I think that one of the encouraging things has been that this has appealed to a lot of different groups here,” Iafigliola said. He also went on to say that with the new high school being built, Sumter Cycling sees it as a high priority to connect bike routes to the new location of the school and South Georgia Tech to make it easier for kids to get back and forth from school.

Each commissioner was given a brochure, which contained a list of priority projects that Alta had recommended as the most effective projects to begin with. Iafigliola, Morgan and Hohnecker also showed the SCBOC various maps with proposed bike routes that would go through Americus and branch out to other parts of Sumter County. Some of the priority projects that Alta recommended included bike routes from Boone Park to Georgia Southwestern State University (GSW), Railroad Street to South Georgia Tech and GSW to Wal-Mart. On one of the maps shown to the SCBOC, several red lines represented proposed bike routes throughout Americus and parts of Sumter County. Iafigliola went on to say that there are grants and funding available for these types of projects. “I think that what we are trying to do at this point is to try to put on paper something that we can work towards that will give grant writers something that they can submit to show that this is our dream and our vision,” Iafigliola said.

Another subject that the SCBOC heard about at its work session was the subject of Midnight Basketball in Sumter County. This is designed for young males ages 13-25 to help keep them off the streets at night between the hours of 10 p.m. and 2 a.m. so that they won’t be out committing crimes during that time period. Britney James is with the Association of Midnight Basketball, Inc (AMBI) and she made her case to the SCBOC about the benefits of midnight basketball for the youth of Sumter County.

James said that she plans to not conduct midnight basketball through the Sumter County Parks and Recreation Department, but instead either through New Horizons Habitat for Humanity or through Georgia Southwestern State University and stated that her organization is in negotiations with both of them. She is hoping that either GSW or New Horizons will allow AMBI to use their facilities at a discounted rate as a community partner. “It’s a crime-prevention program,” James said. “If you are playing basketball between the hours of 10 p.m. and 2 a.m., you’re not breaking into anyone’s house. You’re not selling drugs. You’re not committing any crime.” James went on to say that they can’t stop all crime, but that this program can be used as a deterrent to crime and that if a player gets home around 2:30 or 3 a.m., he’s too tired to go out and commit a crime. “That is why the games are set that late in the evening,” James said.

However, to be eligible to play, James stated that the participants will be required to attend workshops during the week that will involve things that deal with job readiness, such as job interview techniques, what to wear to a job interview and finding out who is hiring. The players will also learn about the dangers of substance abuse and drugs, as well as other things they will have to deal with as they move into real life. “You name it. We’ll cover it because we understand that poverty and crime go hand in hand,” James said. “Usually, people who have a job, who are employed, they’re less likely to commit certain crimes.”

Each workshop will be every Thursday during the summer from 3 p.m. to 5 p.m. and each player must attend these workshops in order to be eligible to play in the games. The games are scheduled to be played every Friday and Saturday evening during the summer.

Board Chairman Clay Jones asked James if this is just a summer program and James replied that it would be just for the summer this year. However, she went on to say that she has been meeting with mayors and police chiefs of various towns to try to see if they can come up with a plan to make this a year-round thing.

James stated that she plans to start this program in Sumter County and for it to expand to all the other adjacent counties.

James told the SCBOC that she would like to have a partnership between AMBI and Sumter County and would like to have funding to begin the program and also stated that she would like a three-year commitment. She also told the SCBOC that the organization would like a chance to show the county that the goals of crime prevention through midnight basketball are being met. County Clerk Rayetta Volley told James that Col. Eric Bryant of the Sumter County Sherriff’s Office stated that they wouldn’t be able to help financially, but would be able to have security at the games.

James stated that in March, AMBI will be recruiting coaches and that each prospective coach must pass a background check in order to be allowed to coach a team. There will be 10 teams with ten players on a team and there will be three time periods in which parents can sign their kids up. If a player is at least 18 years of age, they can sign up on his own.