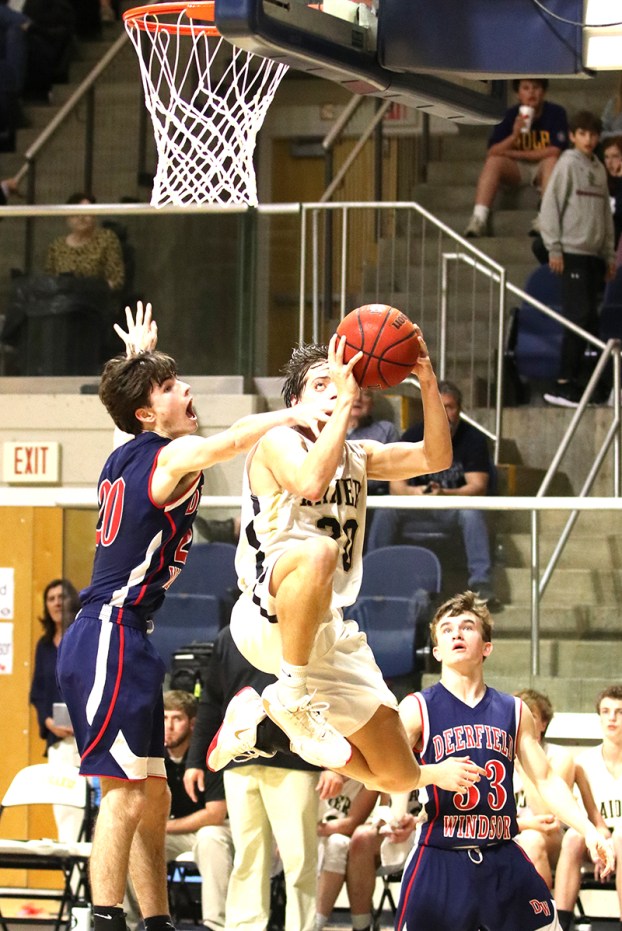 Southland Academy junior guard Owen Exley goes up to score against Deerfield-Windsor. Exley scored 20 points and pulled down 11 rebounds in the Raiders’ 55-36 victory over the Knights in the first round of the Region 3-AAA Tournament. Photo by Sheri Bass

Raiders advance to region championship after win over Deerfield-Windsor

AMERICUS – Thanks to a strong third quarter on the defensive end of the floor, the Southland Academy Raider basketball team (SA) held the Knights of Deerfield-Windsor (DWS) to just five points in the third quarter and were able to cruise to a 55-36 victory in the first round of the GISA Region 3-AAA Tournament on Thursday evening, February 13, at the Storm Dome on the GSW campus.

While the Raiders were getting the job done on the defense in the third quarter, they were able to stretch out their lead from five to 15 points. That proved to be a key factor in the outcome of the game. 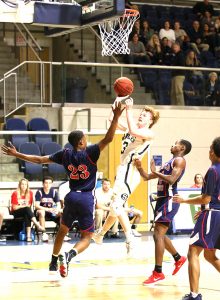 Southland Academy senior shooting guard Adam Smith tries to score against DWS in the first round of the Region 3-AAA Tournament.
Photo by Sheri Bass

With the win, the Raiders improve their overall record to 16-4 and are in territory they haven’t been to in six years. It has been exactly that long since an SA boys basketball team has played in a region tournament championship. They will be playing for the Region 3-AAA Championship on Friday, February 14, against Brookwood (BS).

In their last meeting against the Warriors on Tuesday, February 4, the Raiders won on Senior Night at SA by the score of 54-43.

It has been 18 years since SA has won a region tournament championship in boys’ basketball. They will have a chance to end that 18-year drought when they tip off against BS (15-10).

Regardless of the outcome of that game, SA has already clinched a berth in the Georgia Independent School Association (GISA) Class AAA State Playoffs.