Lady Panthers bounce the Bears to move on in state tournament 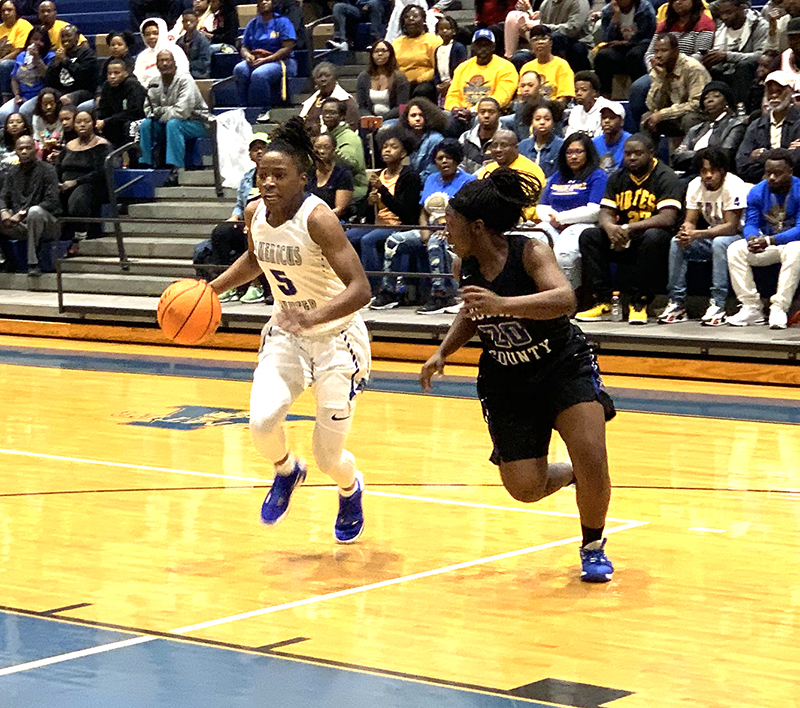 AMERICUS – As they have done all season to most of their opponents, the Americus-Sumter Lady Panthers (25-2) used their suffocating pressure defense to force turnovers early and turn those turnovers into points. On Saturday, February 15, Burke County (BC) was added to the list of many victims that ASHS has conquered in such fashion. The Lady Panthers jumped out to a 16-0 lead in the first quarter and maintained that lead throughout the game on their way to a 49-32 victory over the Lady Bears in the opening round of the Georgia High School Association (GHSA) Class AAAA Girls State Basketball Tournament at Americus-Sumter High School.

While ASHS Head Coach Sherry Harris was pleased with the win, she is extremely concerned about one weakness that keeps manifesting itself in games: The inability to knock down free throws consistently. “When you’re at home, you want to get out to a good start. We came out with a lot of energy in the first quarter,” Harris said. “In the second quarter, we stagnated and got into some of our bad habits. These free throws, man, I’m afraid they may eventually be our Achilles Heel or end up hurting us like they did in the region tournament. We’re missing entirely too many.” 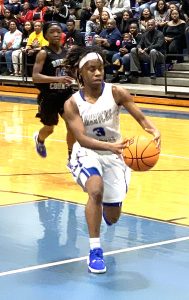 Jelissa Reese led the Lady Panthers in scoring with 19 points and Trinity Jackson was also in double figures with 11. DeAsia Ford scored seven points and both Brianna Pope and Tiffani Goodman each chipped in six points in the winning cause.

BC finishes its season at 13-8. Chanterria Hankershop led the Lady Bears in scoring with nine points and Tyasia Freeman chipped in seven in the losing cause.

From the start of the game, the Lady Bears were rattled. They won the opening tip, but immediately threw the ball out of bounds while trying to score. This was a harbinger of things to come, as the Lady Panthers did to BC what they have done to most of their opponents all season. In the first quarter, they used their defensive pressure to create turnovers and turned them into points at the other end. ASHS went on a 16-0 run in the first quarter, as BC committed numerous turnovers. Some of those turnovers were unforced errors, while others were directly due to the swarming ASHS defense.

The Lady Bears didn’t score their first points of the game until 52 seconds left in the first quarter. By the end of the quarter, ASHS had a comfortable 18-3 lead.

During the first few minutes of the second quarter, BC outscored the Lady Panthers 6-5, but ASHS continued to cause turnovers and tried to score fast-break baskets, as they had done in the first quarter. However, ASHS was out of control at times and missed on some opportunities to increase the lead.

With a little over two minutes to play, the Lady Panthers restored some semblance of order, as Reese scored on a jumper and later hit two foul shots to put the Lady Panthers up 27-9. However, BC responded when Hankershop knocked down a three-pointer with 1:43 to go in the first half. At this point, timeout was called with ASHS leading 27-12.

Out of the timeout, the Lady Bears got a basket from Alaylah Denmark, but Reese responded with another basket for ASHS. Then with 20.2 seconds left before halftime, Pope made one of two foul shots, but Hankershop nailed another three-pointer to cut the Lady Panthers’ lead to 30-17 at the half.

Reese scored 15 of her game-high 19 points in the first half.

The Lady Panthers scored five unanswered points to begin the second half, including one made free throw by Pope. There was very little scoring between both teams for much of the third quarter, but with less than three minutes to play, Reese scored on a layup to put ASHS up 37-18. Then with 1:04 to play, Ford drove to the basket and scored to give the Lady Panthers a 41-18 lead. Brianna Bynes knocked down a three-pointer for BC near the end of end of the quarter, but ASHS still had a comfortable 41-21 lead with one more quarter to play.

Jelissa Reese goes up for a jump shot against Burke County.
Photo by Ken Gustafson

During the third quarter, the Lady Bears had opportunities to score, but for most of the quarter, they were not able to convert on layups or outside shots.

There was very little scoring during the first three minutes of the fourth quarter, but with a little over five minutes to play, Pope was able to knock down two foul shots to give ASHS a 47-22 lead. Over the next couple of minutes, BC outscored the Lady Panthers 10-2, including a three-pointer by Hankershop. However, that would be as close as they would get, as the Lady Panthers went on to win 49-32.

The Lady Panthers will travel to Atlanta on Wednesday, February 19, to take on Marist, the #1 seed out of Region 7-AAAA, in the second round of the state tournament. The Lady War Eagles (26-1) defeated Cedartown 65-21 in their first-round game on Friday, February 14. Tip off for Wednesday’s playoff game is scheduled for 6 p.m.

Panthers dominate Thomson in first round of state tournament