Panthers dominate Thomson in first round of state tournament

Americus-Sumter senior guard Quevoluia Willoughby completes a slam dunk in the Panthers’ 84-58 victory over Thomson in the first round of the GHSA Class AAAA State Tournament. Photo by Ken Gustafson

AMERICUS – The Americus-Sumter boys varsity basketball team (ASHS) ran its unblemished record to 28-0 when they defeated the Bulldogs of Thomson (THS) 84-58 in the first round of the Georgia High School Association (GHSA) Class AAAA State Tournament on Saturday, February 15, at Americus-Sumter High School.

It was a close affair between the two teams in the first half, but the Panthers flexed their muscles in the second half. Midway through the third quarter, the Panthers went on an 11-0 run to take a 57-36 lead. From that point on, the Panthers totally dominated the game the rest of the way and secured their passage into the tournament’s second round.

Kanova Willoughby led the Panthers with 14 points and Trae Brown scored 13. Keldrick Flemming scored nine points, Quevoluia Willoughby poured in eight and Darion Mitchell chipped in seven in the winning cause. The win for ASHS was very much a team effort, as 14 Panthers scored in this game.

ASHS senior small forward Kanova Willoughby goes up to score. Willoughby led the Panthers with 14 points in the state-playoff win over Thomson.
Photo by Ken Gustafson

According to ASHS Head Coach Johnny Genwright, some of the regulars were benched during the first quarter for disciplinary reasons, but they players who started in place of them played pretty well. However, the Bulldogs were athletic enough to go toe to toe with ASHS. “We knew they were going to be athletic. The other team was going to come to play, but we came out I the second half and did what we needed to do,” Genwright said.

ASHS guard Wallace Bradley scored the first points of the game on a three-pointer. However, after he had shot the ball, a THS player collided into him and the officials whistled that player for a flagrant foul, which is a technical foul. Bradley missed the two technical foul shots, but the Panthers still had the ball. From that point, ASHS went on an 11-4 run before the Bulldogs called timeout.

The timeout seemed to settle THS down, as they went on a 6-3 run to close the ASHS lead to 14-10. However, the Panthers responded by outscoring the Bulldogs 9-4 to finish the first quarter with a 23-14 lead. 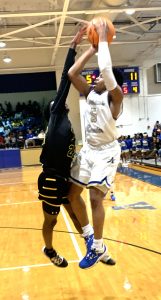 ASHS senior shooting guard Le”Shanna Ross goes up to shoot against a Thomson defender. Ross scored six points in the win over the Bulldogs.
Photo by Ken Gustafson

In the second quarter, THS showed why they belong in the state tournament. They outscored ASHS 11-6. That run included three-pointers by Jalen Moss, Jayden McCall and Ty Braswell. Kanova Willoughby was able to make two foul shots to put ASHS up 31-25, but it was clear that THS was not going away.

The Bullodgs had several opportunities to get closer and even take the lead in the second quarter, but were unable to make some free throws and missed some layups. In the latter minutes of the quarter, both teams were pushing the ball at a frenetic pace, but both teams were out of control at times and committed a few turnovers. However, Keldrick Flemming was able to score and convert a three-point play for the Panthers. Then a few seconds before the half ended, Le’Shanna Ross knocked down a three-pointer to put ASHS up 40-30 at halftime. 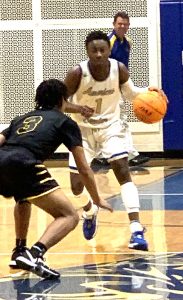 Both teams traded baskets to begin the third quarter, but the Bulldogs were still in striking distance, trailing 46-36 at the 5:00 mark. However, Ross nailed another three-pointer to put ASHS up 13. That three-pointer was the beginning of an 11-0 run by the Panthers, which effectively put the game away. By the end of the third quarter, ASHS was in total control, leading 64-38.

The Panthers totally dominated the game’s final quarter. They used their defense to shut down the THS offense and scored a few points on fast-break opportunities. Quevoluia Willoughby was able to score on a breakaway dunk and Brown knocked down a three-pointer to give ASHS a 72-42 lead. With the big lead, Genwright was able to give his younger players some valuable playing experience. In particular, Michael Johnson came in late and scored six points. 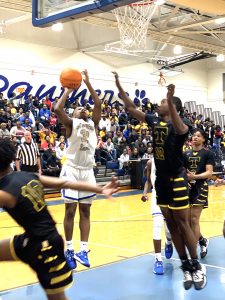 Braswell ended up leading the Bulldogs in scoring with 17 points, including four three-pointers. Moss was also in double figures with 15 points.

The next opponent for the Panthers in their drive to a state championship is Blessed Trinity: the #2 seed out of Region 7-AAAA. The Titans (18-9) defeated Troup 75-56 in the first round of the state tournament. Being that ASHS is the higher seed, the Panthers will be hosting. Tip off for this second-round game is scheduled for Thursday, February 20, at 6 p.m.