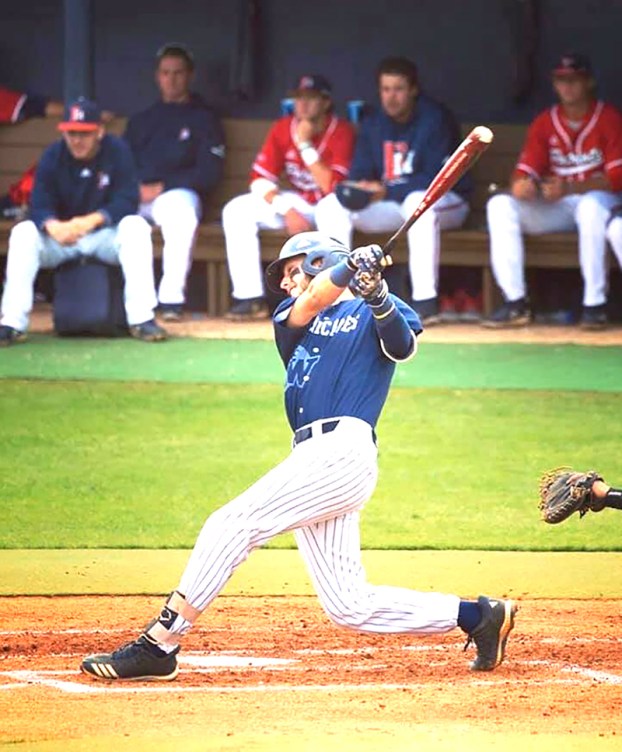 GSW junior infielder Tyler Skelton went 1 for 5 with a double in the Hurricanes’ 9-5 loss to Flagler College in Game 3 of a three-game series. Submitted Photo

Hurricanes fall to 2-7 with Sunday’s loss at Flagler

ST. AUGUSTINE, FL – After Saturday’s 12-6 win over Flagler College (FC) in Game 2 of a three-game series, the Georgia Southwestern State University Baseball Team (GSW) was hoping to build on that victory with another win over the Saints to take the series. However, even though the Hurricanes made a valiant effort by scoring four runs in the top of the ninth to try for the come-from-behind win, they could not overcome an eight-run deficit and lost to the Saints 9-5 in the rubber match of the three-game series on Sunday, February, 16, at the FC baseball complex in St. Augustine, FL.

With the loss, the Hurricanes fall to 2-7 overall on the season and are now 1-2 in the Peach Belt Conference.

GSW shortstop Matthew Mamatas went 1 for 4 at the plate with a single and a walk and third baseman Tyler Skelton went 1 for 5 with a double. First baseman Anthony Angelino went 1 for 5 with two RBIs and pinch hitter John Austin Sutton also drove in a run.

GSW starting pitcher Anthony Capasso took the loss and is now 0-3. Capasso pitched five innings, giving up nine runs on four hits. Four of those runs were earned. He walked two batters and struck out four.

The Saints scored two runs in the first, two in the second and two in the sixth to take a 6-1 lead. The Hurricanes drew first blood in the top of the first. With one out, Mamatas singled to right field and then advanced to second on a throwing error, which resulted from a failed pick-off move. After Hunter Foster struck out, Mamatas advanced to third on a passed ball. After Miguel Urbina drew a walk, Jacob Harrell reached first on a fielding error, which allowed Mamatas to score. 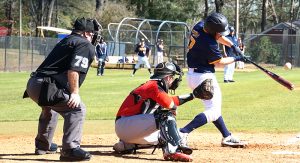 GSW sophomore infielder Matthew Mamatas seen here batting in a previous game. Mamatas went 1 for 4 in Game 3 against FC with a single and a walk.
Submitted Photo

The Saints added two more runs in the seventh and one in the eighth to take a 9-1 lead. However, the Hurricanes would not go quietly. Mamatas reached on a fielder’s choice, Pierson Lewis advanced all the way to third base on a throwing error and Gunner George was able to score the first run of that inning on the play.

After John Austin Sutton drew an RBI walk to score Lewis, Angelino drove in two more runs on a single. However, that would be as close as the Hurricanes would get.

Both Aaron Anderson and J. T. Marr each went 3 for 4 at the plate for FC, while Anderson scored four runs. Colt Minik was the winning pitcher for the Saints. Minik pitched seven innings and gave up one run on two hits. He walked four batters and struck out six.

The Hurricanes will try to get a winning streak going when they travel down to Albany to take on the Rams of Albany State on Wednesday, February 19, at 5 p.m.

Lady Panthers bounce the Bears to move on in state tournament

AMERICUS – As they have done all season to most of their opponents, the Americus-Sumter Lady Panthers (25-2) used their... read more