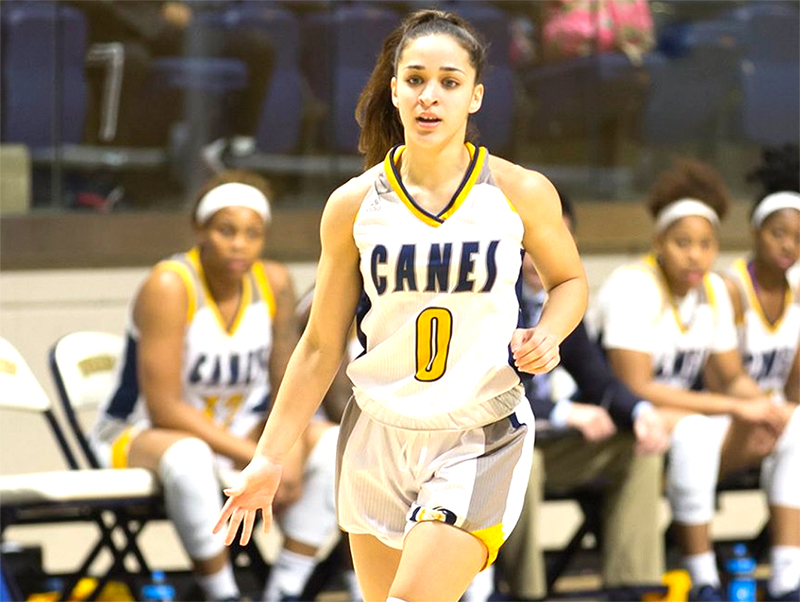 AMERICUS – It has been a rough two weeks for the Georgia Southwestern State University women’s basketball team (GSW), but thanks to double-digit scoring from Yasmin Perez and Mariya Trimble (19 and 17 points respectively), the Lady Hurricanes were able to end a five-game losing streak by defeating Georgia College 60-49 on Saturday, February 15, at the Storm Dome.

With the win, the Lady Hurricanes improve to 7-15 overall on the season and 3-13 in the Peach Belt Conference (PBC).

It was a slow start for both teams, but three minutes into the game, Perez knocked down a three-pointer and it was on after that. The Bobcats answered back, but a three-point play by Perez started a short 7-0 run, putting GSW up by nine. After GC cut the score back down to five, Madison Johnson hit a quick shot, followed by Chatman, who drained one from deep as the Lady Hurricanes led 18-8 going into the second quarter.

In the second quarter, the Lady Hurricanes went up by as much as 12 points, but a 6-0 run by GC cut the score down to three possessions midway through the half. However, GSW answered back during a slow second quarter as they took a 28-16 halftime lead.

Jamesha Samuel drained a three-pointer in the opening minute of the third quarter as GSW took their largest lead at 33-18. The Bobcats responded with a 10-0 run that lasted a full five minutes and were able to cut the score down to seven points. The Bobcats made it a two-possession game, but the Lady Hurricanes responded quickly as they took a seven-point lead going into the final 10 minutes.

In addition to her 19 points to lead GSW in scoring, Perez also had seven rebounds, tallied four steals and was perfect from the foul line. Lex Chatman also had a solid game for GSW. Chatman posted a double-double by scoring 11 points and grabbing 11 rebounds.

The Lady Hurricanes will try to build on this success when they host Young Harris College on Sumter County Parks & Recreation Night on Wednesday, February 19. Tip off is scheduled for 5:30 p.m.

Ken’s Column: No better time than now to be…