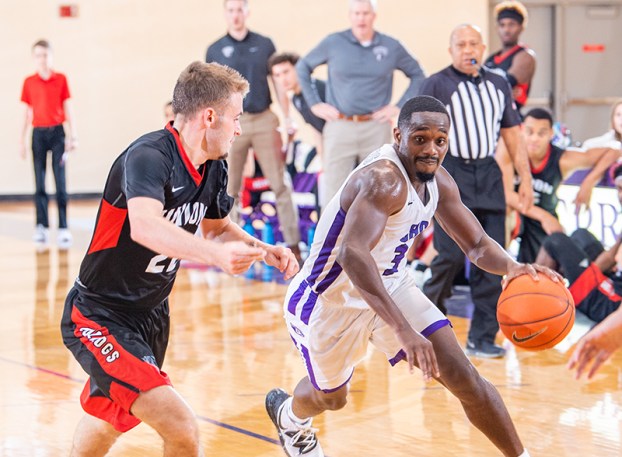 Former Americus-Sumter basketball standout Dwight Harris Jr. (3) is currently a redshirt senior guard at Spring Hill College, an NCAA Division II school in Mobile, AL. In this picture, Harris is seen in action against Union University (TN). He is currently averaging 11.4 points per game and 4.8 rebounds per game. Photo by SHC Athletics

AMERICUS – This year’s Americus-Sumter boys’ basketball team is four wins away from accomplishing something that hasn’t been done in Sumter County in almost 40 years: winning a boys basketball state championship. While this current group of Panthers is to be greatly commended for their success on the court, it must be said that they are standing upon the shoulders of former Panthers who have paved the way for their current success.

One of those former Panthers is Dwight Harris Jr., who was a standout player for the Panthers in 2015. During his time at ASHS, Harris was a Coaches Association All-State selection and was a First-Team All-Region selection. During the 2014-2015 season, Harris helped lead the Panthers to a 26-6 record and helped ASHS advance to the Elite 8 (quarterfinals) of the GHSA Class AAAA State Playoffs. During his senior year (2014-2015), Harris was voted as the Region 1-AAAA Offensive Player of the Year as he averaged 20.1 points per game, five rebounds per game and five assists per game.

If the name sounds familiar, hew is the son of Dwight Harris Sr., who heads up the youth basketball, football and track programs for the Sumter County Parks & Recreation Department (SCPRD). Mr. Harris also heads up the Dwight Harris Boys Club summer basketball league for youth and high school players so that they can have something fun and constructive to do during the summer months.

Harris is now a redshirt senior Spring Hill College (SHC) men’s basketball team. SHC is an NCAA Division II school in Mobile, AL. According to the school’s website, www.schbadgers.com, in 25 games played this season, Harris is averaging 11.4 points per game and 4.8 rebounds per game.

Harris sat out last year and redshirted, but during the 2017-2018 season, he started 25 games and made 28 appearances, averaging 6.5 points per game and grabbing a total of 88 rebounds. Harris also tallied 56 assists, had 18 steals and blocked two shots. During that same year, he scored a season-high 14 points on three different occasions.

Before he came to SHC, Harris played two seasons at Chattanooga State Community College, where he averaged seven points per game, four assists per game and three rebounds per game. After his two seasons at CSCC, Harris could have gone to a number of places to finish his college career and earn his degree, but chose to play for the Badgers. “The campus was very nice and the coaches made me feel welcomed,” Harris said. “When you’re looking for a place to go, as far as college, you want to go somewhere that the coaches want you. If you want to go to a place, all your expectations might not be met, but if the coaches want you then they’re going to make sure everything goes as planned. They made me feel like they wanted me to come here. It was an opening and welcoming environment. That’s what kinda tailored my decision.”

Harris is a Health Science Major and would like to go to Physical Therapy School or Chiropractic School after graduation. As far as coming home to Americus to live and work, that is a possibility. “That’s definitely a possibility. I really just want to keep my options open and see what opportunities are out there,” Harris said. “IF there is an opportunity for me to come home, that would be great.”

The Badgers are currently 7-18 overall and are 6-10 in the Southern Intercollegiate Athletic Conference (SIAC). In their most recent game on Saturday, February 15, SHC lost 79-76 to Lane College in overtime. In that game, Harris scored 18 points, grabbed five rebounds and made six of seven foul shots.