ATLANTA – At the end of the first quarter, it did not look good for the Americus-Sumter Lady Panthers (ASHS). They trailed the Marist (MS) War Eagles 11-0 without having even scored a point in the opening quarter. However, the Lady Panthers made adjustments and in the fourth quarter, they erased a 26-18 deficit to tie the game and would later get the winning basket with 21.9 seconds left on a driving layup by Trinity Jones to complete an epoch 33-32 come-from-behind victory over the War Eagles in the second round of the Georgia High School Association (GHSA) Class AAAA Girls’ State Playoffs on Wednesday, February 19, at the Young Gymnasium on the MS campus.

While the Lady Panthers (26-2) made offensive plays down the stretch, they used their tenacious defense to put themselves in position to win, which is what they have been doing all season.

“I don’t know. We had some wings or something on us. We played outstanding defense. I think that was the difference in the game,” ASHS Head Coach Sherry Harris said. “They couldn’t get by us. We kinda stopped their dribble drive that they were doing. We just closed it out when it counted. With 37 seconds left in the game, I told them that the game is far from over. I said ‘All we’ve got to do is go to the basket and make your layup. Trinity drove, went to the basket. We got two and the rest is history.”

Jones led the Lady Panthers in scoring with 12 points and Jelissa Reese had seven. DeAsia Ford chipped in six points. Trinity Jackson had four and both Brianna Pope and Tiffani Goodman each scored two points in the winning cause. 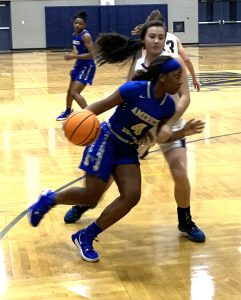 The Lady Panthers got off to a rough start in the first quarter as the War Eagles jumped out to a 7-0 lead, which included a three-pointer from Riley Donahue. During the quarter, ASHS just could not get any shots to fall. The Lady Panthers had several opportunities to score layups on the inside, but they could not get those shots to go in the basket. Incredibly, as a result, ASHS went scoreless for the first quarter and trailed MS 11-0.

One thing that the War Eagles did defensively was implement a triangle and two defense in which Reese was double teamed. This made it extremely difficult for her to do the things she does best and it made it difficult for the ASHS offense to succeed.

The Lady Panthers finally got on the board when Ford was able to score a minute into the second quarter, but ASHS still struggled to score in their half-court offense. 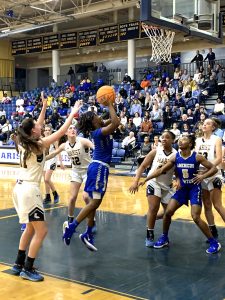 Though they struggled offensively, the Lady Panthers played solid defense, limiting the War Eagles’ chances to score as well. Reese was able to get ASHS back in the game with a basket and a free throw. However, with the seconds winding down to end the first half, the War Eagles worked the ball around the perimeter patiently, as they had done the entire first half. Just as the buzzer sounded, Maggie Thayer nailed a three-pointer to give MS a 16-8 lead at halftime.

“At halftime, I told them to be patient,” Harris said. “They would put two men on Jelissa. I told her that she would have to rely on the other girls to kinda help her out. She couldn’t do it by herself. You get frustrated with two people guarding you and you not being able to do some of the things you’re able to do, but we were able to get some easy looks once we started penetrating.”

The War Eagles jumped out to a 22-10 lead in the third quarter. That run included a three-pointer by Tyler Brazle. However, the Lady Panthers responded with an 8-2 run, capped off by a three-pointer from Jones, to cut the MS lead to 24-18. Though the Lady Panthers had struggled to score during the first three quarters, they were still in the ball game, trailing 26-18 by the start of the fourth quarter. 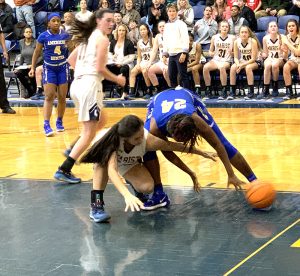 Americus-Sumter senior forward Brianna Pope dives to save the ball from going out of bounds. Pope scored two points in the Lady Panthers’ win.
Photo by Ken Gustafson

With a little over six minutes left in the game, Jackson scored to cut the ASHS deficit to six. This was followed by a pull-up jumper from Reese, prompting a timeout by MS. Just like that, the Lady Panthers were right back in the game as they only trailed 26-22. The ASHS defense had intensified as well, as the War Eagles were struggling to score.

With less than two minutes to play and the Lady Panthers trailing 30-28, ASHS patiently worked the ball around the perimeter to try to find a high-percentage shot. Then with 1:32 to go, Jones nailed a three-pointer to give the Lady Panthers the lead. ASHS was able to force a turnover on the War Eagles’ next possession, but Thayer stole the ball from Ford and drove to the basket for a layup to retake the lead for MS with 36.4 seconds left. This prompted Harris to call a timeout to settle her team down and to try to set up a play to retake the lead.

Out of the timeout, Jones drove the ball towards the top of the key, then quickly drove down the lane and scored what would end up being the game-winning basket with 21.9 seconds left. However, that was more than enough time for the War Eagles to come up with a game winner themselves.

Out of the timeout called by MS, the War Eagles were able to break the ASHS press and found Brazle, who drove to the basket and was fouled by Ford. Brazle would go to the free-throw line with a chance to tie or give the War Eagles the lead with time running out. However, she missed both foul shots. On the second miss, the ball was initially rebounded by Jamison Henley of MS, but her put-back attempt failed and the ball was rebounded by Reese with just a few seconds left. The War Eagles tried to foul ASHS to stop the clock, but Ford’s inbounds pass to Reese caused Reese to go out of bounds and MS recovered the ball with 0.3 seconds left. However, the War Eagles’ last gasp at a miracle failed and the Lady Panthers escaped Atlanta with a 33-32 victory. 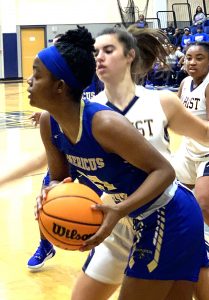 The War Eagles, the #1 seed out of Region 7-AAAA, finish their season at 26-2. They were led in scoring by both Brazle and Thayer, who each scored seven points. Eva Wirtz scored five points. Both Henley and Avery Fantucci each scored four points. Donahue had three points on a three-pointer in the first quarter and Lexy Faklaris scored two points to round out the War Eagles’ scoring.

The next obstacle the Lady Panthers must overcome in their march to Macon will be Spalding: the #1 seed out of Region 2-AAAA. The Lady Jaguars (23-4) defeated Oconee County 52-38 to advance to the Elite 8. ASHS will travel to Griffin, GA on either Tuesday or Wednesday, February 25 or 26 to take on the Lady Jaguars for the right to go to the Final Four at Fort Valley State University on Friday, February 28.