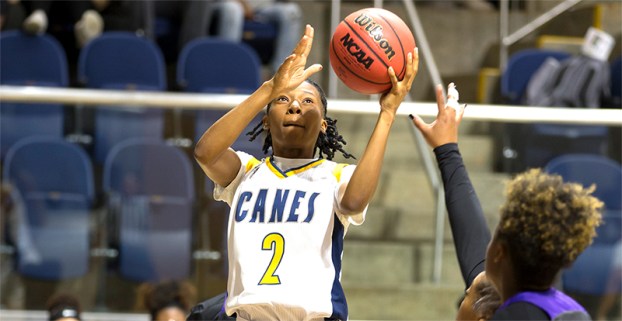 AMERICUS – The Georgia Southwestern women’s basketball team pushed their winning streak to three as they closed a three-game home stand with a 65-56 win over Flagler College (FC) on Saturday afternoon, February 23, inside the Storm Dome on Homecoming Day.

GSW senior guard Kayla Smith, who picked up her fourth start this season, finished with her first career double-double as she picked up a team-high 13 rebounds while scoring 10 points.

Smith put the first points on the board to start the game early in the first quarter, but FC quickly answered back twice to take a 4-2 lead. After draining a pair of free throws, Lex Chatman drained one from deep to cut the lead down to one. Midway through the first quarter, Mariya Trimble drained 1-of-2 from the free throw line as she tied the game at 8-8. The Lady Hurricanes then went on an 11-3 run to take a 19-11 lead going into the second quarter.

The Saints opened the second quarter with a quick six-point spurt, but a three-pointer by Chatman helped end things quickly as GSW was up, 22-17. It was back-to-back scoring for both teams during the second quarter, but the Lady Hurricanes didn’t let the Saints get within one possession. Another three-pointer by Chatman put GSW up by seven as they went into halftime up 33-26.

In the third quarter, Madison Johnson got hot by draining back-to-back three-pointers, followed by a quick layup to push GSW up 43-32. GSW took their largest lead of the night (13 points) midway through the third quarter after Dominique Jeffery backed down and scored in the post. Samuel closed the quarter with a deep three-pointer to keep the double-digit lead for the Lady Hurricanes.

GSW (9-15, 5-13 PBC) kept the lead and owned the whole fourth quarter to end their three-game home stretch with conference wins. Both teams shot 28.6 percent from behind the arc, but the Lady Hurricanes led by as they made eight, while Flagler (6-18, 4-14 PBC) only made four. GSW caused 21 turnovers and turned them into 19 points, but the Saints held a 47-42 rebounding advantage.

The Lady Hurricanes will hit the road and take on PBC foe Columbus State on Wednesday, Feb. 26, at 5:30 p.m.

COLUMBUS – The Americus-Sumter High School Baseball Team got off to a rough start to the 2020 season by dropping... read more