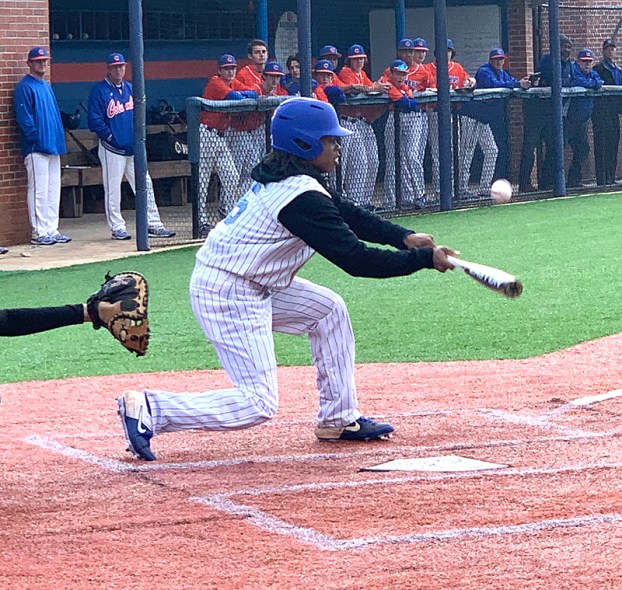 Jarod Lewis tries to lay down a bunt in the Panthers’ 15-0 loss to Columbus. Photo by Ken Gustafson

COLUMBUS – The Americus-Sumter High School Baseball Team got off to a rough start to the 2020 season by dropping a doubleheader on Friday, February 21, against Columbus High School (CHS). In Game 1, the Panthers fell to the Blue Devils 15-0 and lost Game 2 by the score of 20-1.

In spite of the rough outing, ASHS Head Coach Lee Wright was pleased with the efforts of some of his players. 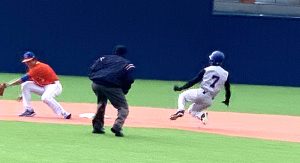 With one out in the top of the first inning, both Kylen Carter and Terrende Rush drew walks off CHS starting pitcher Kevin Johnson. However, the Panthers weren’t able to take advantage as Johnson struck out the next two batters to end the inning.

Rush, who was the starting pitcher for the Panthers, struggled in the bottom half of the inning. He walked leadoff hitter Sean Derosier and hit the next batter, Davis Livingston, putting two men on base with no outs. Devan Cail then drove in both runners on a single to give the Blue De3vils and early 2-0 lead. Cail was able to advance to second base on the play as ASHS left fielder Ketorious McCoy committed an error. Cail would later score on a wild pitch to give CHS a 3-0 lead. The Blue Devils were able to score two more runs in the inning on wild pitches to take a 5-0 lead. 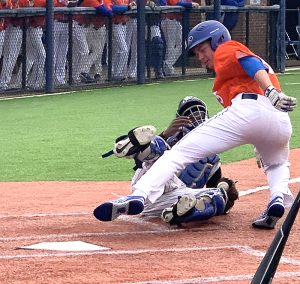 ASHS catcher Kylen Carter holds on to the ball long enough to tag out a CHS runner at home plate.
Photo by Ken Gustafson

Unfortunately for the Panthers, they were hitless at the plate, while the Blue Devils continued to take advantage of errors, wild pitches and passed balls. As a result, CHS scored 10 more runs to secure the 15-0 victory in Game 1.

Unfortunately for ASHS, the same scenario repeated itself in Game 2. The Blue Devils scored eight runs in the top of the first inning to set the tone. However, the Panthers were able to score a run in the bottom half of the first. Carter led off the inning by drawing a walk off CHS starter Ashwin Mahadevan and then stole both second and third base. After Tyler Hilliard line out to second base and Jayce Hollis struck out, Carter scored the Panthers’ only run of the game on an error by CHS catcher Devan Fico. 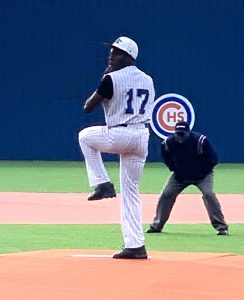 Americus-Sumter pitcher Terrende Rush was the starting pitcher for the Panthers in Game 1 against Columbus.
Photo by Ken Gustafson

However, the Blue Devils grabbed total control of the game by scoring 12 runs in the top of the second inning on seven hits, three walks, two errors and one hit batsman.

The Panthers were not able to respond during the next two innings and the game was run ruled.

The Panthers will try to rebound from this setback when they travel down to Camilla on Monday, February 24, to take on the Eagles of Mitchell County. First pitch is scheduled for 5 p.m.