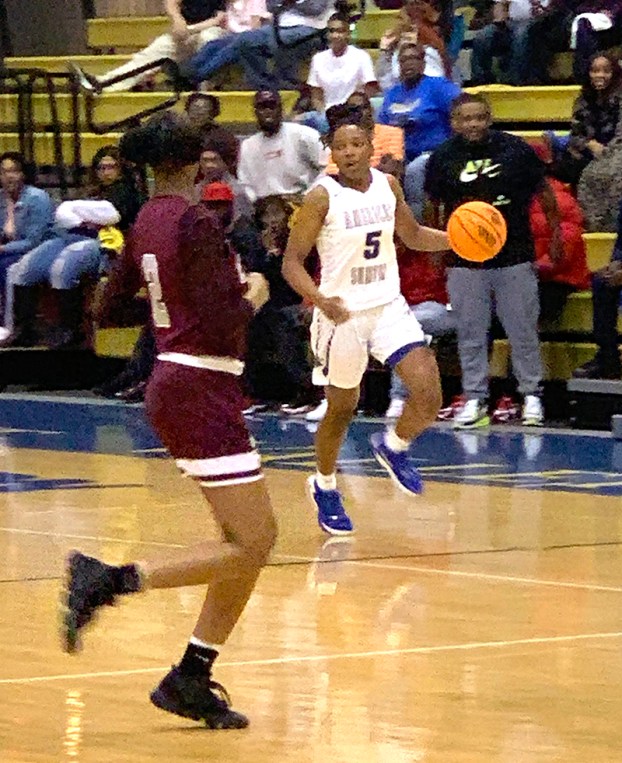 Lady Panthers get by Luella in overtime at state semifinals

FORT VALLEY, GA – The Americus-Sumter Lady Panthers (28-2) are Macon bound. In an extremely hard-fought battle that demanded an extra session, ASHS was able to make free throws down the stretch and make plays on the defensive end to edge out the Lady Lions of Luella 56-51 in overtime in front of the large and faithful contingent of Panther fans at the Georgia High School Association (GHSA) Class AAAA Girls’ State Semifinals at Fort Valley State University.

As one would expect from two of the top teams in Class AAAA, this was a literal “cat fight” that went back and forth as both teams clawed and scratched to earn a spot in the Class AAAA state championship game at the Macon Centerplex this coming Friday.

As in most playoff games between two evenly matched teams, the outcome came down to who could succeed at “the little things”, such as free-throw shooting.

The Lady Panthers have struggled at the line for much of the season, but found their stride at the charity stripe in the fourth quarter of their 47-42 win over Spalding in the quarterfinals last Wednesday. Fortunately for ASHS, they were able to find that same success in the overtime period, knocking down five of eight free throws to win by five. 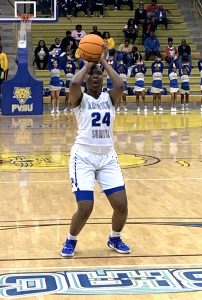 Americus-Sumter senior forward Brianna Pope at the line shooting free throws. Pope scored all six of her points from the foul line, including two made free throws in overtime.
Photo by Ken Gustafson

While they were able to make their free throws during the overtime period, the Lady Panthers struggled at the foul line during regulation, hitting only seven of 15 free throws.

“That game would have probably been over had we knocked down free throws,” said ASHS Head Coach Sherry Harris. “We started out making them. Then all of a sudden, it looked like Ocean Pacific. It was crazy.”

For the game, the Lady Panthers made 12 of 23 foul shots, while the Lady Lions made six of 12.

Harris went on to say that the team’s foul shooting has improved somewhat due to the fact that the girls have put in the extra practice. “We’re getting a lot of shots up every day,” Harris said. “As a matter of fact, some of the girls are coming in little early, getting extra work in and trying to get better, especially on the free-throw line. We are fortunate that it didn’t kill us because we missed a bunch of them late in that fourth quarter.” 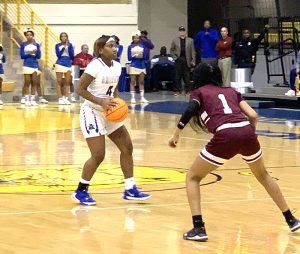 Both teams struggled to score early in the first quarter. For ASHS, the quarter was reminiscent of the first quarter during the Marist game, when the Lady Panthers went scoreless for the entire quarter. The Lady Lions jumped out to s 4-0 lead, but ASHS responded with four straight points late in the quarter, including a basket from Reese.

However, LHS outscored the Lady Panthers 7-2 during the rest of the quarter to take an 11-6 lead.

While ASHS struggled in the first quarter, they came alive in the second as they went on a 6-2 run, capped off by a layup from Jones. This prompted a timeout by LHS with a little over five minutes before halftime. 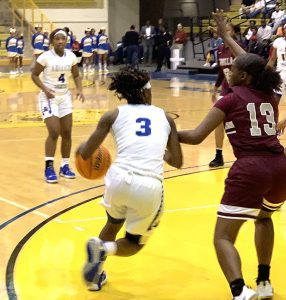 Then with 3:59 to go, Reese got a steal and scored to give ASHS the lead. This was followed by a three-pointer from Jackson. The Lady Panthers, who struggled to score in the first quarter, were wide-awake in the second with a 17-13 lead.

Over the next couple of minutes, ASHS intensified its half-court defense and held the Lady Lions to one point, while they jumped out to a 21-14 lead, forcing LHS to call a timeout with 1:51 remaining. The comeback by ASHS had electrified the large contingent of ASHS fans that made the 44-mile trip to Fort Valley. 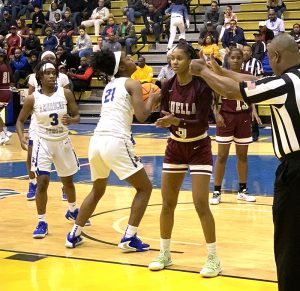 However, LHS responded with a 6-0 run to start the third quarter. Reese responded with a basket for ASHS, but the Lady Panthers’ lead had been trimmed down to 28-23 with a little over six minutes left in the quarter.

Over the next few minutes, both teams traded baskets, but the Lady Lions got to within two at 32-30 when Keely Brown scored on a driving layup. This was followed by a tying basket from Arianna Dyson. The Lady Lions were back in the game and their contingent of fans began to make noise.

With 1:26 to go, Reese had a chance to regain the lead for the Lady Panthers, but missed both free throws. However, Pope was able to knock down two foul shots to give ASHS a 36-34 lead. Unfortunately for ASHS, that lead didn’t last long as Brown knocked down a jump shot at the horn to tie the game at 36-36 to start the fourth quarter. 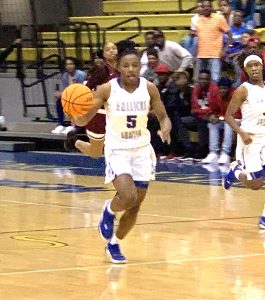 Jelissa Reese pushes the ball up the court for the Lady Panthers. Reese sank two free throws in the fourth quarter and one in overtime to help ASHS get the victory.
Photo by Ken Gustafson

It was only fitting that the score was tied at the end of three quarters between two of the best Class AAAA teams in the state for the right to go to Macon.

The Lady Lions scored six unanswered points to begin the fourth quarter, including two foul shots from Brown, but ASHS struck back as Goodman found Jackson for a layup, cutting the LHS lead to 40-38.

Several seconds later, Reese was able to get a steal and a basket to tie the game, but the Lady Lions responded with five more points, including a three-pointer from Dyson. At this point in the game, Jones committed her fourth foul, making things difficult for the Lady Panthers. ASHS was also struggling to score and would need a turning point to get back in the game. With 4:16 left, the Lady Panthers trailed 45-40 with their dreams of playing for a state championship hanging in the balance. 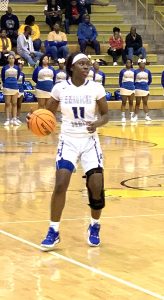 With less than four minutes to go, the Lady Panthers slowed down their offense and worked the ball around the half court, looking for a good shot. They weren’t able to get it and the Lady Lions got the rebound and called timeout with 3:08 to go.

Out of the timeout, ASHS tried to press full court, but LHS was able to break the press. However, the Lady Lions were unable to score and Jones converted at the other end to cut the deficit to 45-42. Both teams scored on their next possessions and Harris called a timeout with 1:39 left. The Lady Panthers still had a chance as they only trailed 47-44.

With a little over a minute to play, ASHS got a steal and a basket from Reese. She was fouled on the play and converted the free throw to bring ASHS to within one a 47-46. Reese came up with another steal and nearly scored, but the shot didn’t fall.

Then with 42.8 seconds left, Goodman was able to give the Lady Panthers a 48-47 lead by driving baseline for a layup. Timeout was called with ASHS nursing that one-point lead.

The Lady Panthers went to a full-court press out of the timeout, which forced LHS to call another one, but when play resumed, the Lady Panthers forced a turnover and got the ball back. With 30.6 seconds left, Goodman was fouled and would go to the line to shoot one-and one. She made the first shot, which earned her a second one, but missed the second free throw. However, ASHS got the ball back and Pope was fouled. Pope missed the front end of the one and-one, but the Lady Panthers forced a jump ball on the rebound, which went in their favor.

With 20.4 seconds left, Reese was fouled and went to the line. However, she missed the front end of the one-and one and the Lady Lions got the ball with 15.9 seconds left. If the Lady Panthers could get a stop on defense, they would most likely seal the game. 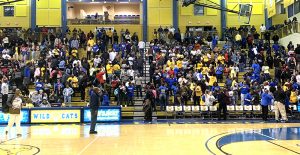 A large contingent of Americus-Sumter fans made the 44-mile trip to Fort Valley State University to watch their Lady Panthers defeat Luella in overtime and punch their ticket to the Class AAAA state championship game.
Photo by Ken Gustafson

However, with five seconds to go, Paris Miller’s shot looked like it was going to rest between the rim and the backboard, but it fell in to tie the game. Jones was able to get off a good shot at the horn, but it was off the mark, requiring overtime to decide the outcome.

Miller scored for LHS by driving to the basket to open the scoring in overtime, but Pope was able to hit two foul shots to tie the game at 51-51.

With a little over two minutes to go, Jones committed her fifth foul as she was driving to score. However, The Lady Panthers were able to respond as Goodman lobbed the ball over the top of the LHS defense to Jackson, who scored to give ASHS the lead.

Though losing Jones was big blow, Harris was confident in the depth that she has at the guard position. “One thing about it, we’ve got a lot of depth as far as our guards, which always helps when you’ve got more than one ball handler,” said Harris.

The Lady Lions finish their season at 25-6. They were led in scoring by Brown with 24 points.

With the last obstacle along the road to Macon eliminated, the Lady Panthers will look to “flex at the plex” on Friday, March 6. They will take on the Lady Tigers of Troup (27-1), who dethroned the defending Class AAAA state champions Carver-Columbus 56-47. It all comes down to one game and that game is for the Class AAAA State Championship. Tip off from the Macon Centerplex is scheduled for 11 a.m.