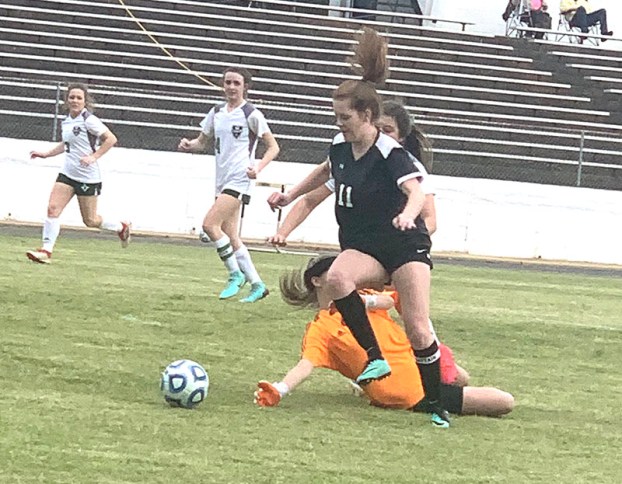 Southland Academy forward Hannah Adkins maneuvers her way past the Westfield goalkeeper and scores the first of her two goals in the Lady Raiders’ 3-3 tie with the Lady Hornets. Photo by Ken Gustafson

AMERICUS – With less than two minutes to play in the match and Southland Academy owning a 3-2 lead, it looked as if the Southland Academy Lady Raiders soccer team was going to earn a hard-fought victory over the Lady Hornets of Westfield (WS). However, WS forward Valarie Padilla spoiled the party as she scored the tying goal with 1:48 left on the clock. As a result, the Lady Raiders had to settle for a 3-3 draw with the visitors from Perry on Monday, March 9, at Harvey Simpson Stadium.

While he would have much rather had the win, SA head coach Rundy Foster was pleased with the overall performance of his club, as well as the result, especially given the fact that the Lady Raiders fell to WS 5-1 earlier this season. 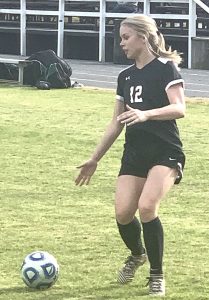 Southland Academy forward Maddie Crisp is looking to dribble along the end line or cross the ball into the 18-yard box.
Photo by Ken Gustafson

The Lady Raiders got off to a dream start in the first half. Just a few minutes into the match, Hannah Adkins took a shot that went past the WS goalkeeper and into the far corner of the net to give SA a 1-0 lead. Only a couple of minutes later, the Raiders added to their lead when Brooke Weisner scored. Just like that, SA was up 2-0.

The Lady Raiders continued to put pressure on the back line of the Lady Hornets and created more chances to score, but they would not be able to keep WS off the scoreboard.

With 2:32 left to play in the first half, WS forward Maura O’Connell scored the first of her two goals in this match, bringing WS to within one at 2-1 by halftime. 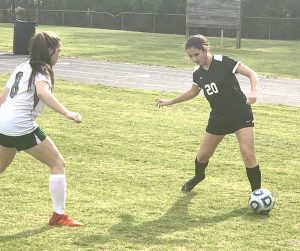 SA’s Brooke Weisner takes on a Westfield defender. Weisner scored a goal early in the match to give the Lady Raiders a 2-0 lead.
Photo by Ken Gustafson

Late in the game, SA was in a defensive posture to try to keep the Lady Hornets from tying the game, but a misplay in SA’s backfield led to Padilla’s tying goal with 1:48 to go. Neither team was able to come up with a late winner and game ended in a 3-3 draw.

The Lady Raiders will take the pitch again at Harvey Simpson Stadium when they face Tiftarea Academy in a region match on Tuesday, March 10, at 5 p.m.

From Staff Reports   AMERICUS – A group of local community leaders will be hosting a March Madness charity event... read more