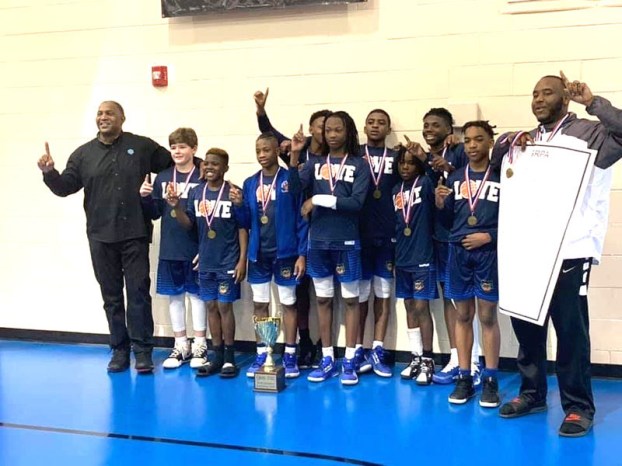 The Sumter County 12U Boys All-Star Basketball Team poses for a team photo after beating Riverdale 61-36 to win the 12U GRPA State Championship. Submitted Photo

AMERICUS – In addition to the Americus-Sumter HS girl’s basketball team winning the GHSA Class AAAA State Championship, there were other Sumter County teams that clinched state titles during the weekend of March 6-7.

Three All-Star basketball teams from the Sumter County Parks and Recreation Department (GRPA) won state championships in their respective age groups. They all competed in the Georgia Parks and Recreation Association (GRPA) state tournaments that were held at various venues throughout the state.

The 8U Boys team traveled over to Effingham County to compete in that age group’s state tournament. In their first game, the 8U Boys defeated Baldwin County in a tight game by the score of 35-30. In the second game, they were able to handle Barrow County, beating them by the score of 43-24. That put them in the semifinals against Calhoun, but it was not a problem for these Sumter County All-Stars. They were able to beat Calhoun in a tight struggle 36-32 to advance to the championship game against Hapeville. In that championship game, the SC All-Stars were able to win by double digits as they defeated Hapeville 43-28 to claim the 8U GRPA State Championship.

The 12U Sumter County (SC) All-Stars traveled up to Habersham County in the North Georgia Mountains for their state tournament. In their first game, SC thoroughly dominated Dawson County 78-1. They then proceeded to dominate Butts County 81-2 before defeating Summerville in the semifinals 68-33. This set up a championship game between to high-quality teams: the SC All-Stars and Hapeville.

In that game, the SC All-Stars faced much stiffer competition than they had in the three previous games of the tournament. However, they were able to edge out Hapeville 61-60 to take the GRPA 12U Girls State Championship. 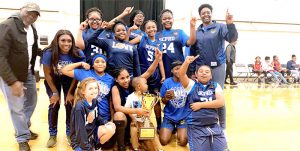 The SC 12U Boys team traveled to Carrollton for their state tournament and they were able to bring home a state title as well. In their opening-round game, SC took on Liberty County and defeated them 50-27. They faced stiffer competition in their second-round game against Summerville, but were able to come away with a hard-fought 48-45 victory. That put the 12U SC All-Stars into the semifinals against Baldwin County, but the SC All-Stars had no problems with the boys from Milledgeville. They defeated Baldwin County 70-46 to advance to the state championship against Riverdale. In that state championship game against the boys from South Metro Atlanta, SC won in dominating fashion by beating Riverdale 61-36 to claim the 12U GRPA State Championship.

As a result of their victory, the 12U SC All-Stars will be competing in a new championship this year. They will travel to Blufton, SC to take on the South Carolina 12U state champions this Saturday, March 14 in the new “Border Wars” game.

Dwight Harris, who oversees youth basketball for the SCPRD, realizes that without the work of the fine coaches that coach these kids, along with their parents, the success that SCPRD has had in youth basketball would not be possible.

“I would like to thank all my coaches for their hard work, dedication and determination. It would not have been as successful without you,” said Harris. “Thanks to all the parents and everyone in their respected places. Sumter County, we hope we made you proud.” 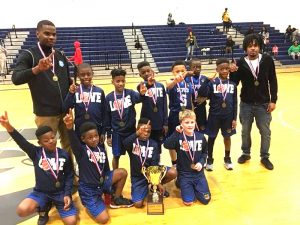 Harris went on to say that he wanted to give special thanks to Men on a Mission for helping to fund the travel costs for the teams going to the state tournaments. Men on a Mission is a local organization here in Americus tries to help the community financially so that kids can participate in youth sports.

“I’d like to thank Men on a Mission, Mr. William Peterson, Vincent Kearse, parents and the entire community for their contribution and support,” said Harris.