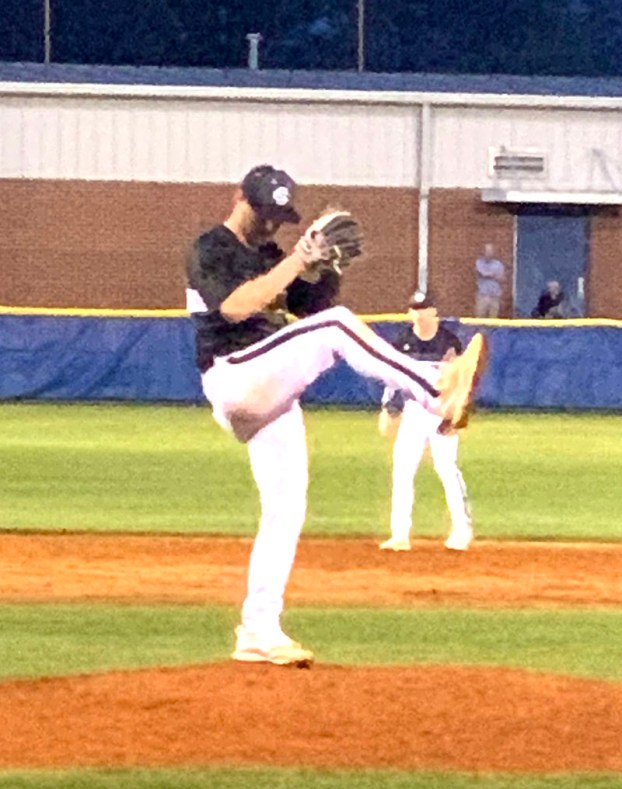 Schley County starting pitcher Trent Bivins had a solid outing on the mound for the Wildcats. Bivins gave up one run on one hit, struck out seven and walked three against Crisp County. Photo by Ken Gustafson

CORDELE – For five innings of play, the game between the Schley County Wildcats (SC) and the Crisp County Cougars (CC) was pretty much a pitchers’ duel. However, with the Cougars leading 1-0 in the top of the fifth, the Wildcats were able to score the tying run when Garrett Peavy drove in Luke Renfroe on an RBI single.

Then in the top of the eighth inning, the Wildcats took advantage of five CC walks and scored three runs to take a 4-1 victory on Monday, March 9, at Crisp County High School.

“I thought that both pitchers were just really, really good tonight,” said SC head coach Chuck Cheek. “Their kid, Noah Walters, was on top of it. He threw strikes, threw a bunch of different pitches for strikes and kept us off balanced and we couldn’t screw anything up on him. For us, Trent was just really, really sharp on the mound. Both of us scratched across a run at one point. We played pretty good defense, but this was the classic pitchers’ dual.”

Both teams were scoreless until the bottom of the fourth inning. A pitch from Bivins hit toby Stripling, who led the inning off for the Cougars. Bivins then tried to pick off stripling, but threw the ball away, allowing Stripling to advance all the way to third. Bivins struck out Jack Carter for the first out, but Stripling was able to score on an error by SC first baseman Tyler Cheek. 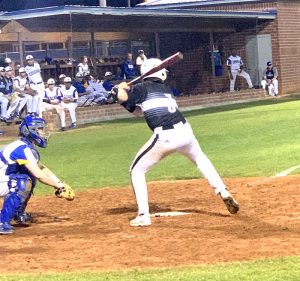 Trypp Lumpkin scored Schley County’s fourth and final run of the game and struck out the last two batters he faced in the bottom of the eighth to preserve the 4-1 win for the Wildcats.
Photo by Ken Gustafson

However, the Wildcats would draw even in the top of the fifth inning. Athon Hines led off the inning by reaching on an error by CC shortstop Connor Richmond.

After Cheek bunted into a fielder’s choice for the first out and Logan Wurtz struck out, but the Wildcats still had runners at second and third.

With two outs, Peavy came through by driving in Renfroe on an RBI single to tie the game.

No more runs were scored between the two teams over the next couple of innings and the game would have to go into extra innings. In the top of the eighth, however, the Wildcats were able to break through. Bivins led off the inning with a double to left field. Dylan Taylor then drew a walk, putting runners on first and second with nobody out.

Bivins would later advance to third base on an error and Dylan Taylor got hit by a pitch to load the bases for Luke Pawlowski. Pawlowski was disciplined at the plate and was able to draw an RBI walk to give SC a 2-1 lead. After Hines lined out to second for the first out, Taylor was able to score on a wild pitch and Renfroe drew a walk to reload the bases. Then Trypp Lumpkin scored SC’s final run of the game on a wild pitch.

In the bottom half of the eighth, things got dicey for the Wildcats as reliever Garrett Peavy walked the first two batters. Lumpkin was brought in to pitch and was able to strike out Jack Carter and Nick Lanneau. However, the Cougars still had runners at second and third.

Fortunately for SC, Lumpkin was able to strike out Richmond to end the game and seal the victory for the Wildcats.

“We’re playing a lot better, much better than we did the last time we played them and it got rained out in the fourth inning,” said Cheek. “The guys competed and they’re working hard trying to get better. We’ve obviously got to swing the bats better. A lot of that is due to who they had on the mound. Noah (Walters) did a great job and kept us down, but we’re going into more guys like him this year. We’re going to have to hit better.”

AMERICUS – With less than two minutes to play in the match and Southland Academy owning a 3-2 lead, it... read more