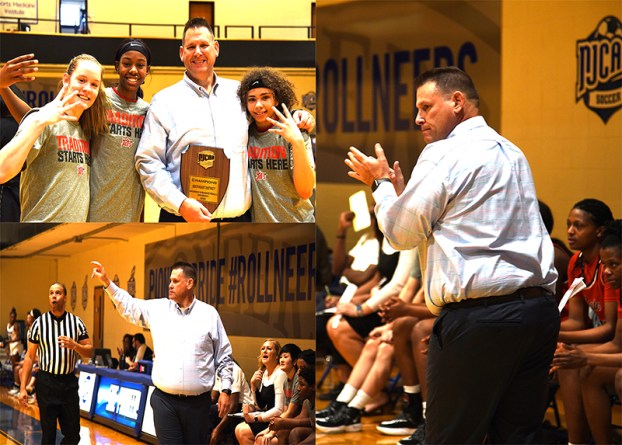 The many faces of Lady Jets head coach during the match-up against Spartanburg Methodist in the District J championship game. He is shown with Lady Jets sophomores Anna McKendree, Yasriyyah Wazeerud-Din, and Shamari Tyson with the District J Championship plaque. Then he is shown directing players on the court and applauding their efforts. The Lady Jets are off to NJCAA National Tournament for fourth straight season. Photo by Su Ann Bird

This will be the sixth trip in eight years for Frey, who came to SGTC just in time to kick off the 2012 – 2013 season. It was his first head-coaching job and he had only about a month and a half to pull together a team and find an assistant coach. Frey managed to post a 20 – 12 record and finish in the final four of the NJCAA Region XVII Tournament that first year, despite having only one player returning.

While he says winning gets harder, Frey has managed to make it look easy through a lot of hard work, sweat, tears, and straight up coaching. He has had a winning season for each of the past eight years and has amassed over 200 wins, in addition to six NJCAA National Tournament appearances. Frey has been named GCAA Coach or Co-Coach of the Year, NJCAA Region XVII Coach of the Year and District J Coach of the Year six times in those eight years.

“That first year was a difficult year,” said Frey. “It was my first time as a head coach and I was hired in the summer of 2012. I had one player coming back and I had to go find some basketball players.”

Shontae McCall, who had been named to the GCAA All-Tournament team as a freshman, was his only returning player, but within two weeks, he signed Nikkei Blackburn and Rasheda Patterson from Bennettsville, SC. A few weeks later, Frey signed Keyana Rutledge from South Carolina. From there, his legacy was established and has continued to grow.

His Lady Jets finished the regular season 14 – 2 in the conference and 21 – 4 overall in 2013 – 2014. They won the GCAA title, the NJCAA Region XVII Tournament and defeated Denmark Tech in the District J Championship to advance to the national tournament for the second time in the history of the program and the first time for Frey. His team was 30 – 5 at the end of the year, which was the best SGTC record ever for a men’s or women’s basketball team.

Frey and the Lady Jets finished second in the GCAA in 2014 – 2015, but beat Darton College in the NJCAA Region XVII Tournament to have the opportunity to advance to the NJCAA National Tournament for the second consecutive year. His team finished the year 29 – 8 and they also won their first game ever in the national tournament that season.

The Lady Jets were hoping to have a three-peat season in 2015 – 2016, but former Lady Jets head coach Brandon Harrell and his Georgia Highlands team got the best of the Lady Jets in the NJCAA Region XVII tournament to spoil their hopes of a third consecutive trip to the nationals. SGTC finished the year 27 – 6 and Frey got his 100th win.  He was 106 – 30 as a head coach in four seasons.

Now four years later, the Lady Jets have put together a four-peat trip to the nationals. They got back on the right track in 2016 – 2017 and advanced to the nationals, where they won their first game. SGTC finished the season with a 30 – 5 record. They made their second consecutive trip in March to Lubbock and wound up 29 – 6.  The 2018 – 2019 season was the third straight time the Lady Jets qualified and even though it was a disappointing trip without a win. That year, his team finished 30 – 4 overall and Frey’s record moved to 193 – 41 overall as a head coach.

This year, he reached his 200th win early on and earned his fourth consecutive and sixth overall trip to the national tournament. The Lady Jets are 220 – 39 under Frey’s leadership and he is hoping that his team can get further in the national tournament than they have in the past. During those eight years, Frey has had help from some really great assistant coaches.

“We are really excited about this opportunity. Every year, we have to work extremely hard to get to the national tournament,” said Frey. “And now that we are here, we have to play well to advance. We need to shoot like we are capable of and get after our opponents. We have five players who were at the national tournament last season and that gives us a little bit of experience, but we need to go out there and play hard.”

Frey said that he is humbled by the success that his teams at SGTC have had.  “The Lady Jets have an incredible desire to win and play good. They have shown that all season. The two games against Georgia Highlands, where we had to come back from 22 points down was a real confidence builder. They are excited about this opportunity.”

Frey also thanked SGTC President Dr. John Watford and his administration, as well as the college’s faculty and staff for their support of the program. He also had high words of praise for the community.

“This community is phenomenal,” Frey said. Every year, they support us during the regular season and then they are generous when we go to the national tournament. I am proud and humbled to have been able to be a part of this program at South Georgia Technical College and the community that supports it.”

And that is part of the reason that Frey said that winning never gets old, but it gets harder. “I don’t want to let our college and our community down,” said Frey. “I put pressure on myself and the team because of all of the support that we receive. I feel like if we don’t win or do our best, we are letting the people down that have supported us year after year. That pressure doesn’t come from the college or the administration, it comes from me and wanting to do what is best for the college, the players, the program, and the community,” explained Frey.

Individuals who would like to keep up with the Lady Jets progress can see posts on SGTC social media on Facebook, Twitter and Instagram, as well as on NJCAA Championship TV at:  https://njcaachampstv.com/landing/index. There will be a fee to watch the game on the NJCAA Championship TV link. The Lady Jets’ first game will be Tuesday, March 17, at 8:45 p.m. EST against North Dakota State College of Science at the Rip Griffin Center in Lubbock, TX.