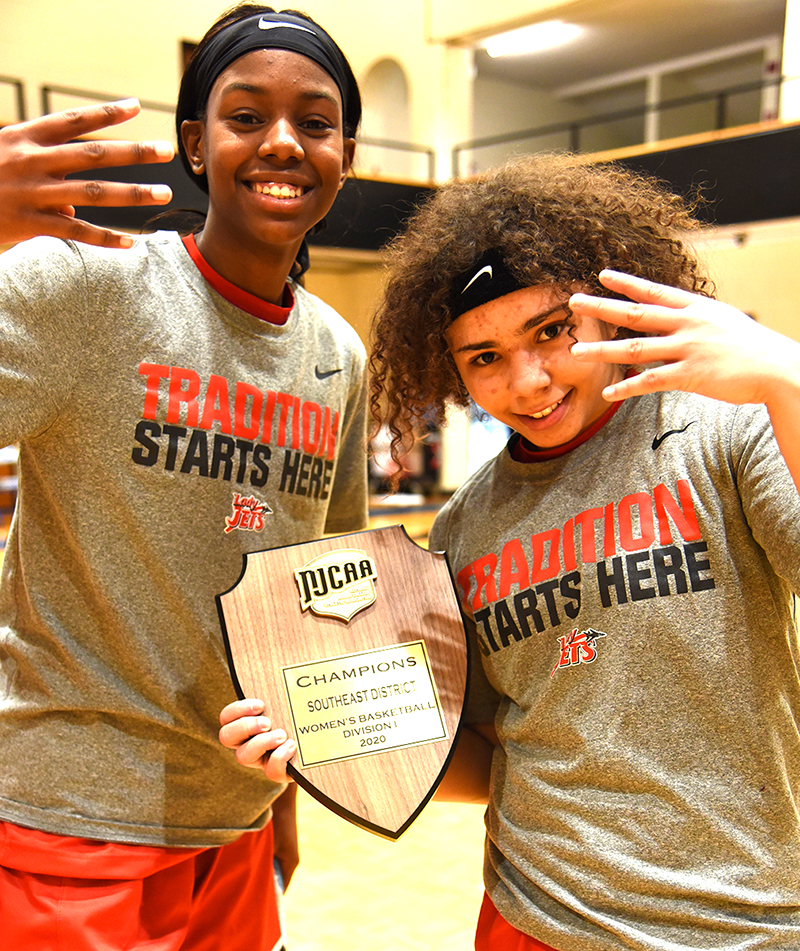 South Georgia Technical College’s Yasriyyah Wazeerud-Din and Shamari Tyson are shown together after they led the Lady Jets to their fourth consecutive NJCAA District J championship this season to earn the right to advance to the NJCAA National Tournament in Lubbock, Texas. Photo by Su Ann Bird

Tyson was honored with a third-team All-American recognition and Wazeerud-Din was listed as a World Exposure NJCAA honorable mention All-American. Only 35 of the top NJCAA women’s basketball players in the nation earned this distinction.

“I am very proud of both of these young women,” said SGTC Lady Jets head coach James Frey. “They deserve this and more. They did everything that we asked of them on the court and in the classroom. I am disheartened by the way the season ended. These girls had earned the right to compete at the national tournament and through no fault of their own, the trip and season was cancelled. COVID-19 has made placing our sophomores at the next level a little more difficult, but I am confident that each of the sophomores will have the opportunity to continue their careers as student-athletes at the next level. These types of honors will definitely help.”

Tyson was also listed as one of the 15 finalists in the World Exposure National Junior College Athletic Association (NJCAA) Sophomore of the Year Award.

The Fort Wayne, IN native transferred to SGTC from SE Illinois College for her sophomore season. She was a third team NJCAA All-American in 2019. This season, she helped lead the Lady Jets to a 30-2 record, the best in school history. Tyson was selected as the overall GCAA Player of the Year, and won the GCAA Player of the week nomination four different times.

Wazeerud-Din, a 5’ 11’ sophomore guard from Marietta, GA, has been with SGTC for two seasons. As a sophomore, she helped lead the Lady Jets earn back-to-back undefeated Georgia Collegiate Athletic Association seasons. The Lady Jets were 35 – 0 in the conference from 2018-2020.

This season, Wazeerud-Din was the leading scorer for the Lady Jets averaging 15.1 points per game. She was a 75 percent free throw shooter and made 50 percent of her three point attempts and averaged over 20 minutes per game on the court this season.

In addition to her scoring ability, Wazeerud-Din also accounted for six rebounds a game, along with three assists and three steals each outing. Both Wazeerud-Din and Tyson were listed as GCAA All-Academic team members for the 2019 – 2020 season.