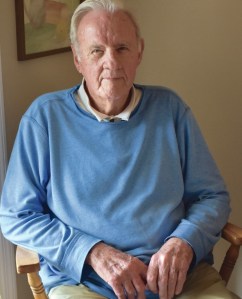 In 1943, Toby enlisted in the United States Army at age 17. He served in New Guinea, Manila, and Sasebo, Japan, from 1945 to 1946. His most vivid memory was walking through the dust of Nagasaki just weeks after the atomic bomb drop. Later in life, Toby recounted his wartime experiences in interviews with the Atlanta History Center, Americus Times-Recorder and Chattanooga Times Free Press.

Toby attended Georgia Southwestern College and later graduated from the University of Georgia with an accounting degree in 1949. Thanks to the G.I. Bill, Toby was the first in his family to attend college, and his motivation to graduate was to win the hand of his beloved Alice, which he succeeded in doing on July 9, 1949, at Leslie United Methodist Church.

Toby worked for the U.S. Rubber Company in Hogansville, GA, and later New York City for many years. Wanting to be closer to family, Toby, Alice and their two children relocated in 1960 to Dalton, GA, where Toby started several textile businesses. He lived in Dalton for 58 years before moving home to Plains, GA, where he made new memories at Sumter County Retirement VIllage.

Family was Toby’s greatest love. He spent years studying, writing and sharing the genealogy of his ancestors. He also restored several family cemeteries across Sumter County. Much of his genealogical research and wartime artifacts can be found in the library collections of The University of Georgia and Georgia Southwestern State University.

Toby and his son were longtime advocates for mental health treatment and services. They loved playing golf together and watching the Dawgs. He was known in Dalton for his expansive flower garden, which he tended with close friend Curtis Williams. Toby’s advice for a long life: love your family, laugh and walk daily and keep the fridge stocked with Coca-Cola and Hershey’s chocolate bars.

Toby will be laid to rest in Alice’s family cemetery at DeSoto Methodist Church in DeSoto, GA, on the anniversary of D-Day, Saturday, June 6 at 10:00 a.m. In lieu of flowers, the family kindly requests donations to Leslie United Methodist Church, Magnolia Manor or Phoebe Sumter Hospice.

You may sign the online guestbook and share your own special thoughts and memories by visiting www.greghancockfuneralchapel.com

Greg Hancock funeral Chapel is in charge of these arrangements.