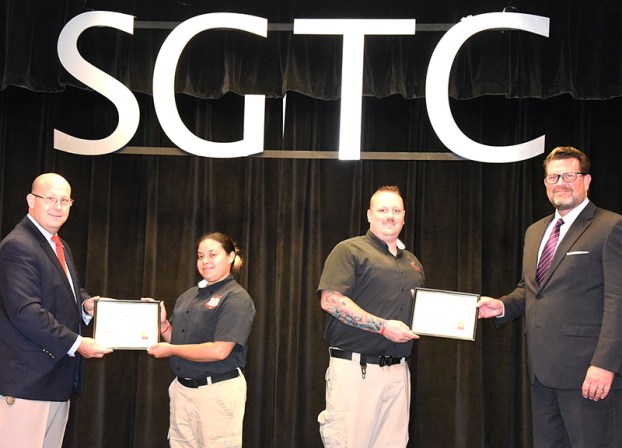 AMERICUS – A four-month commitment to enroll in the South Georgia Technical College Law Enforcement Academy Class 20-01 turned into a nearly seven-month commitment due to the arrival of the COVID-19 pandemic.  Class 20-01 cadets made it to a little past the half-way mark before being forced to put their dreams on hold of graduating from the Law Enforcement Academy and earning their Peace Officer Standards and Training (POST) certification.

However, that dedication and commitment paid off for the cadets who completed the program. This was especially true for Yamilette Martinez-Rodriguez of Oglethorpe and William McClanahan of Montezuma, who were both awarded the Lt. Michael Sangster Law Enforcement Academy Scholarship at the completion of their training.

Both Martinez-Rodriguez and McClanahan do not regret their decisions to enroll in this program and are very thankful to the family of Lt. Michael Sangster and others who helped make this scholarship opportunity possible.

“I am the mother of one beautiful boy and I never really thought about the idea of being a police officer until I took a ladies’ firearm class sponsored by the Montezuma Police Department.  I had never fired a gun before that and I ended up being the best shooter of the class,” said Martinez-Rodriguez. “The Police Chief saw how good I did in the class and immediately asked me if I was interested in becoming a police officer.”

That word of encouragement from the Chief motivated Martinez-Rodriguez to apply to the Law Enforcement Academy at SGTC and give it a try.  “I had always wanted to do something different with my life and I thought that this was a great opportunity to do something and give back to my community,” she said.

Martinez-Rodriguez started the program in the fall, but failed one test and was dismissed. However, she persevered and did not give up. “I thought to myself that I was going to try again,” said Martinez-Rodriguez. “During that time, I enrolled in the Criminal Justice program to help me get familiarized with law enforcement. Taking those classes made me want to get my degree. I am not a person who gives up easily and if I want something, I am not going to stop until I have it. So I came back and now I have earned my POST certification. I plan to also finish my degree in Criminal Justice and advance my career in law enforcement.”

McClanahan, a 38-year-old father of four, had dreams of becoming a police officer since he was seven years old. However, he chose different career paths and found that none of them really satisfied him or measured up to his original dream of becoming a law enforcement officer.

He put himself through college and received a Bachelor of Science degree in Criminal Justice. Then he began the process of applying to a law enforcement academy. He selected SGTC and took a temporary job in corrections to gain experience and basic certification to be able to get admitted into the academy at SGTC.

During this time, he has been separated from his wife, son and three daughters who live in Florida, but his persistence has paid off and he has been offered a job with a Sheriff’s department upon completion of the program. “All of the hard work is paying off. I am ready and my wife and kids are excited to finally begin this new chapter of our lives in the state of Georgia,” said McClanahan.

These were the 14th and 15th Lt. Michael Sangster scholarships that have been awarded at SGTC since 2012.  Lt. Michael Sangster was an officer with the Crisp County Sheriff’s Office and served as a volunteer instructor for the SGTC Law Enforcement Academy from the inception of the program. He lost his battle with cancer and passed away in 2012 at the age of 35. With the help of family, LEA students, friends, SGTC faculty and staff, as well as Lou Crouch, a scholarship was endowed in his memory for SGTC LEA students.

Lt. Sangster was born in Dooly County, but spent most of his life in Cordele. He was the son of Robert Sangster, Sr. and Connie Sangster Youngblood. He has a sister, Melissa Sangster and a son, Caleb.

“On behalf of South Georgia Technical College and the South Georgia Technical College Foundation, I would like to thank the Sangster family, Lou Crouch and the other individuals who donated to this particular scholarship for partnering with us,” said SGTC President Dr. John Watford.  “We appreciate the opportunities that this scholarship is providing for our deserving Law Enforcement Academy students. Your investment in an endowed scholarship will continue to give back to our students indefinitely. We appreciate everything you are doing for our students and our community. Thank you again for recognizing the value of the educational opportunities and for supporting this effort. The students you help today will be the public servants that we count on tomorrow in our local communities.”

For more information about making a donation to the Lt. Michael Sangster Scholarship Fund or for endowing a scholarship at South Georgia Technical College, contact Su Ann Bird, SGTC Foundation Executive Director at 229.931.2110 or sbird@southgatech.edu. Contributions may also be mailed to the SGTC Foundation, P.O. Box 6102, Americus, GA.

The South Georgia Technical College Law Enforcement Academy program takes 18 weeks to complete and most recruits qualify for the HOPE Grant and other forms of financial aid. Admission standards require all students to undergo a thorough background check and adhere to all rules as set forth by the state POST Council. Students will also have to meet minimum scores in English, reading and math.

From Staff Reports   AMERICUS – South Georgia Technical College (SGTC) will be hosting orientation for its summer and fall... read more