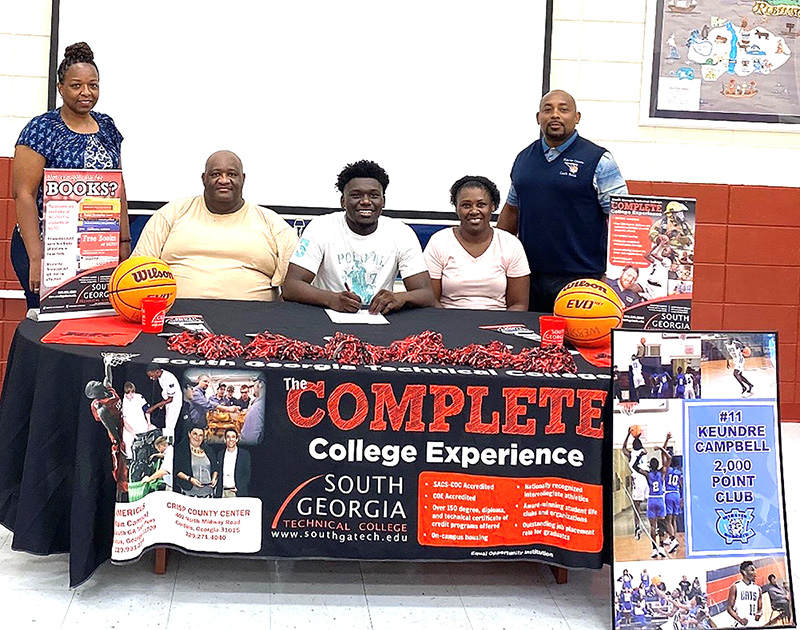 In spite of playing at one of the smallest schools in the state, there aren’t many things that Campbell didn’t accomplish on the basketball court. Campbell plans to take those skills to the hardwood at the Hangar this coming fall.

The 6’3, 195-lb. point guard/shooting guard was ranked 28th in the nation in scoring in the Final 2019 – 2020 MaxPreps Top 50 high school boys’ basketball scoring leaders poll. Of the 50 players highlighted, 31 were seniors, 11 were juniors and four each were sophomores and freshmen. They were from 22 different states and Campbell was the only Georgia player listed.

Campbell averaged 30.8 points per game and 10.7 rebounds per game during his senior season. He finished his high school career with 2,187 points. Campbell was also the Region 1A Offensive Player of the Year for three years in a row and was selected to the First Team All-Region Team four years in a row.

Campbell was also selected as the Sandy Spiel’s Class A Freshman of the Year in 2017, was named to the GACA All-State Team, was voted the Team MVP and led all GHSA classifications in scoring.

Campbell said he selected SGTC for several reasons. “They have a good support system and it’s a great school as far as academics and athletics and it’s also close to home,” said Campbell.

While he’s looking forward to the next chapter of his life, he will never forget his time at Webster County High School. “I enjoyed the new experiences every year, the support system, my teammates, my coach, the adversities, my friends and the first game of the season feeling in the fall,” he said.

WCHS Head Coach Demairs Keeyon Battle, who recently was named as the new basketball coach at Chattahoochee County High, expects Campbell to soar as a Jet. “This student-athlete has also earned a 3.0 GPA in the classroom while being humble and working hard,” said Battle. “His is your model student-athlete, starting with being very coachable.”

“We are excited to have Campbell sign with the Jets,” said SGTC Assistant Men’s basketball coach Chris Ballauer. “He was an awesome shooter in high school and we believe that he will be able to do the same thing at this next level.”

The Jets finished the 2019 – 2020 season in seventh place in the Georgia Intercollegiate Athletic Association and finished with a 13 – 18 overall record under head coach Travis Garrett. They advanced to the NJCAA Region XVII playoffs, but were eliminated by Georgia Highlands in the NJCAA Region XVII quarterfinals by the score of 81-69.

Garrett has signed Campbell to a full scholarship at SGTC.  Garrett led the Jets to a 75 – 80 overall record in his five years as head coach of the program. The Jets finished in the NJCAA Region XVII tournament twice and advanced to the quarterfinal round three times in those five years.