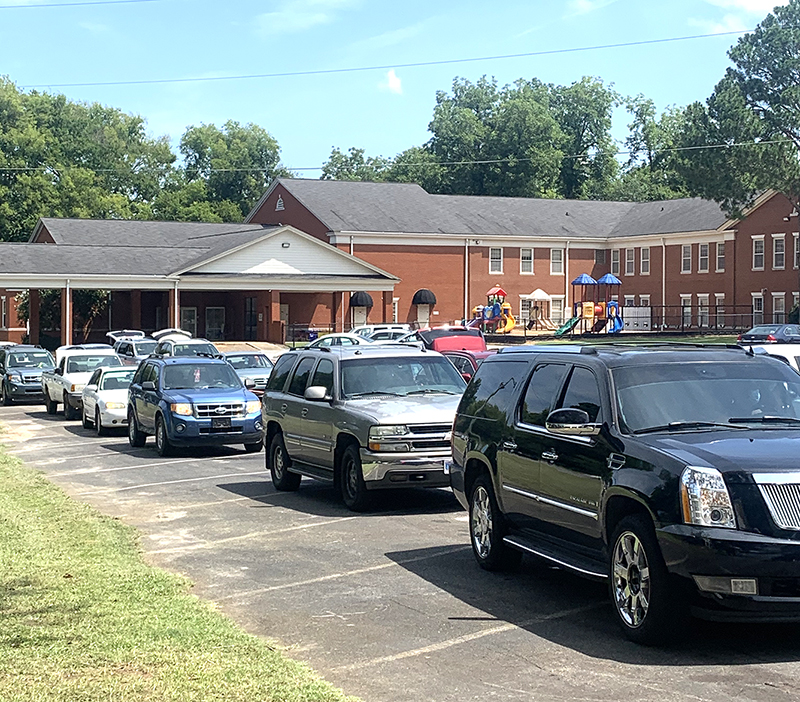 AMERICUS – Amidst the turmoil and the economic fall out in Sumter County caused by the COVID-19 Pandemic, several people came together to provide food and hope to those in the county who are in need. The Americus Harvest of Hope Food Pantry (AHO) held a drive-by food give-away on Thursday, July 16, at the First Baptist Church of Americus.

From approximately 9 a.m. till about 1 p.m. on Thursday, several volunteers were giving out food to hundreds of people gathered in their cars to pick up food items.

According to AHO Executive Director Sonny Pinckard, the response was overwhelming.

“When I came down here, they were lined up all the way on Lee Street to come in over here on Jackson,” said Pinckard. He went on to say that during the last drive-by food give-away they had a month ago, 645 people came to get food. 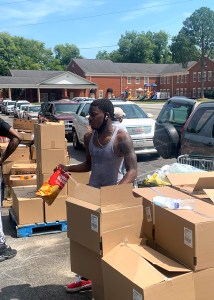 Jaylan Harris (gray tank top) is one of the many volunteers giving food to people at the Americus Harvest of Hope Food Pantry’s drive-by food give-away at First Baptist Church of Americus on Thursday, July 16.
Photo by Ken Gustafson

According to Pinckard, there was a big problem earlier in the day because the truck that was supposed to transport meat, chicken and fish items to the give-away broke down in Valdosta and wasn’t able to come, which caused the give-away to be delayed. “We had to go get stuff out from the food pantry,” said Pinckard. “That’s the reason we got off to a late start.”

According to Pinckard, the Americus Harvest of Hope Food Pantry was founded in June of 2013 to serve those in need throughout Americus and Sumter County. ”We started the operation to get it together about October in 2012,” said Pinckard. “But it took so long to get everything, all the paper work. We had all kinds of paper work. It took all that time to get ready.” 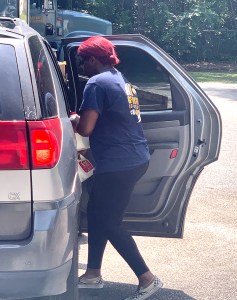 Volunteer Kilah Clayton loads some food into a van at the Americus Harvest of Hope Food Pantry’s drive-by food give-away at the First Baptist Church of Americus.
Photo by Ken Gustafson

While the exact number of people who came to Thursday’s drive-by food give-away is unknown, judging by the long line of vehicles gathered in the church parking lot, there are many people in Americus and throughout Sumter County who are in need of food due to the economic turmoil caused by the COVID-19 Pandemic. As they have been doing since June of 2013, the Americus Harvest of Hope Food Pantry continues to provide food and hope to those who need it. The food pantry is located at 606 McGarrah Street in Americus.