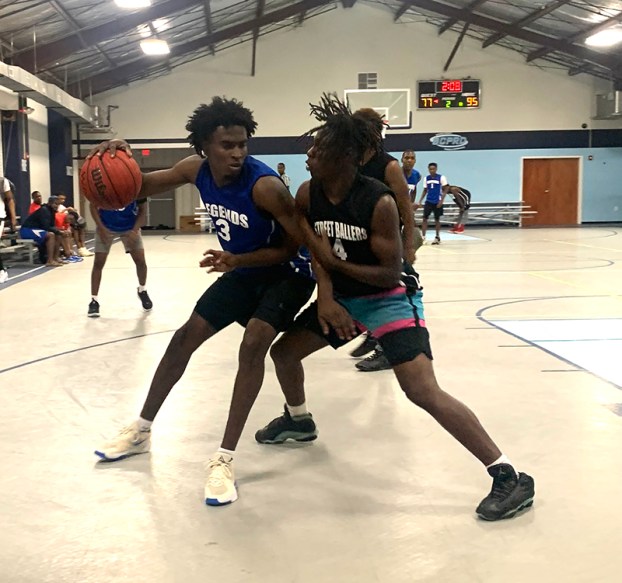 Scotty Sheffield (#3) of the Legends tries to get by Jy’Kobie Brown of the Street Ballers in the first game of the SCPRD Adult Summer Basketball League. Sheffield scored 25 points in this game. Photo by Ken Gustafson

AMERICUS – With youth, high school and college sports in Sumter County having been canceled in the spring and summer due to COVID-19, the Sumter County Parks and Recreation Department (SCPRD) is trying to create some sense of normalcy and fun during these trying times. What the SCPRD decided to do is to put on an adult recreation men’s basketball league for players ages 18-25.

The league is made up of three teams with nine players on each team and the players on these teams are all former high school and current college players, including former Americus-Sumter players Melton McCoy and Wallace Bradley and college players, such as Eric Hall (Georgia Southwestern State) and Mike Volley (Brewton-Parker).

Thursday evening, July 16, the SCPRD Adult Summer League began play in the gymnasium at The Columns at Boone Park.

“It’s new. We’ve never done it before. This is the first time,” said SCPRD Director Tim Estes. “We’re having to make sure we are within all the Governor’s executive orders, so we can’t allow more than 50 in the gym and that’s including the players and the officials.”

Estes went on to say that there will be several hand sanitizing stations set up throughout the building, including one that people will see when they enter the front door. On each of the bleachers in the gymnasium, there are designated X markers. Those X markers are where people are to sit while watching the games so that the social distancing guidelines can be met.

The three teams in this league are the Street Ballers, the Legends and a team called Top Flight. The league began play on Thursday, July 16, and it will end sometime in mid August. The teams will play on Thursdays, Saturdays and Sundays in order to accommodate the players and the work schedules.

One of the teams will play two games on a certain night, but after the first game, the team that is only playing one game that night, along with their fans, must leave the facility in order to make room for the fans of the next team to come and watch. In other words, no more than a maximum of 50 people can be in the gym during the games.

According to Governor Brian Kemp’s executive orders on social distancing, no more than a maximum of 50 people can be in one space unless they can be placed six feet apart per social distancing guidelines.

During the first game between the Street Ballers and the Legends, several people were standing outside the gymnasium waiting to get in, but they had to wait because the amount of people already in the gym was at 50, including the players, coaches and officials. 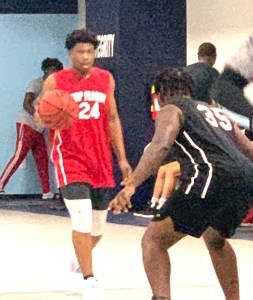 As far as the two games were concerned on Thursday, both were exciting, but the second game between the Street Ballers and Top Flight was the more competitive of the two. For the entire game, it was closely contested, with neither team gaining a big lead. With less than a minute to play, the Street Ballers had a 71-69 lead, but Top Flight’s Eric Brown knocked down a three-pointer to give his team a one-point lead. As the seconds wound down, former Americus-Sumter player Mike Flemmings attempted a game winning three-pointer for the Street Ballers, but it fell short and Top Flight escaped with a hard-fought 72-71 victory.

Kevin Stone led Top Flight with 18 points and Stepfon Luster poured in 13 in the winning cause. Flemmings led the Street Ballers with 20 points and Jontavious Jernigan scored 16 in the losing cause.

Though the Street Ballers lost their second game to Top Flight, they had no problem with the Legends in their first game. They trailed early by the score of 6-3, but scored five unanswered points two take a two-point lead. From that point on, the Street Ballers dominated the contest. They went on a 23-12 run in the first half to take a 31-18 lead. The Street Ballers continued to dominate the rest of the half and led 51-34 at halftime. 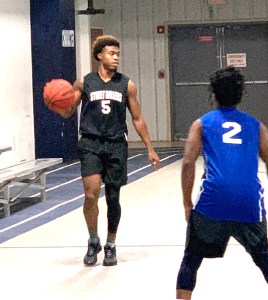 Street Ballers point guard Michael Terry (#5) directs his team’s offense against the Legends. Terry scored 11 points in the 101-84 win over the Legends in the inaugural game of the SCPRD Adult Summer Basketball League.
Photo by Ken Gustafson

Jernigan led all scorers with 36 points, including six three-pointers. Both Flemmings and Mike Volley each had 18 points for the Street Ballers. As for the Legends, they were led in scoring by Scotty Sheffield’s 25 points. Sh’qual White poured in 24 points and Wallace Bradley chipped in 11 points in the winning cause.

For these players, being able to cone out and do what they love is a welcomed relief from all of the negativity going on in the world.

“It feels great just to have a sense of normalcy and just to get back to what we love, which is basketball,” said Max Foster, who plays for the Street Ballers. “Despite whatever else is going on in the world, God is in control and He’s going to always be in control. It just feels real good to be back out here.”

All three teams will be in action this Saturday and Sunday. There will be two games on each day, with the first game on Saturday starting at 6 p.m. The first game on Sunday will begin at 4 p.m., followed by the second game at 5 p.m. All games are made up of two 20-minute halves.

GHSA allows helmets to be used, but still no word on start of football season