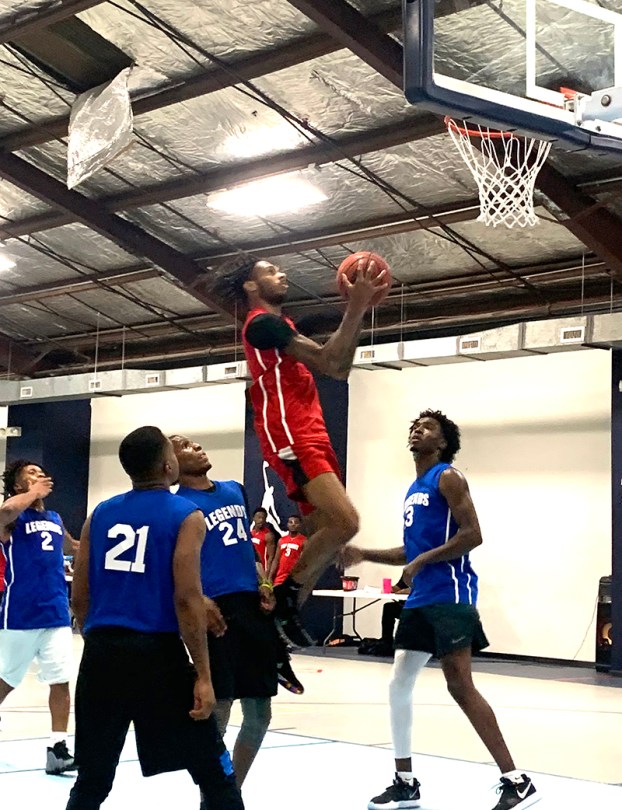 AMERICUS – The beginning of the new Sumter County Parks and Recreation Department’s adult summer recreation basketball league is going well, but one of the teams is still looking for its first win of the season. On Saturday, July 18, the Legends, made up of a few former Americus-Sumter High School players, had two chances to get their first win. However, they fell to Top Flight (TF) 83-71 and dropped their second game to the Street Ballers by the score of 85-80 at The Columns at Boone Park.
While they fought hard in both games, it was difficult for the Legends, as they had to play back-to-back games.
“Back-to-back games, they hurt us. We were too sore. In the second half, we ran out of gas,” said Legends Assistant Coach Brandon Price. Price was handling the coaching duties, as head coach Rundy Foster could not be there.
One interesting twist that the league has incorporated is the five-point shot. Nine feet behind the left side, right side and the top of each three-point line, league officials placed red squares. If a player was to make a shot from one of those red squares, it would be five points. In the two games played on Saturday, a total of 12 five-Point shots were made. 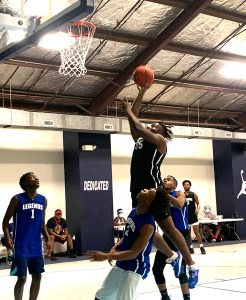 Mike Flemming goes up to score for the Street Ballers against the Legends. Flemming poured in 24 points in this game.
Photo by Ken Gustafson

In their first game against Top Flight, the Legends were able to stay in contention in the first half, as they trailed 33-28 at halftime. However, TF took over in the second half and was up by as much as 26 points. The Legends made a run late in the game to make the final score respectable, but TF went on to win 83-71.
L’Shannon Ross led Top Flight with 19 points, including a five-pointer. Stepfon Luster scored 14 points and Kevin Stone chipped in 11 for TF. The Legends were led in scoring by Scott Sheffield with 31 points, including three five pointers. Wallace Bradley was also in double figures with 18 points, including two five pointers. 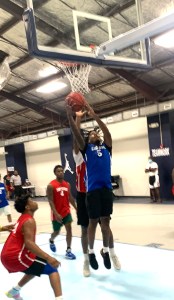 Cedric Gardner goes up for an offensive rebound for the Legends.
Photo by Ken Gustafson

In the Legends’ second game against the Street Ballers (STB), they got off to a great start by jumping out to an 18-6 lead. The Legends controlled the remainder of the first half and led at halftime 48-34. Sheffield scored 20 points in the first half, including two five pointers, to lead the Legends’ attack. However, things were much different in the second half, as STB went on an 8-0 run to cut the Legends’ lead to 48-42.

The Street Ballers would eventually overtake the Legends and led for much of the second half. However, in the waning moments of the game, Sh’Qual White drilled a three-pointer to bring the Legends to within one at 81-80. Unfortunately for the guys in blue, it would not be enough, as STB held on to win 85-80. 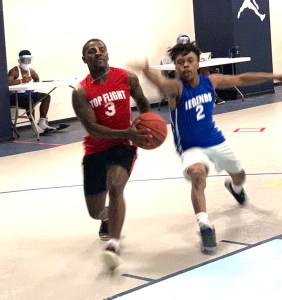 Top Flight guard Eric Brown drives to the basket against the Legends. Brown was the first player in the league to hit a five-point shot.
Photo by Ken Gustafson

Sheffield once again led the Legends’ attack. He led all scorers with 35 points, including two five pointers. Wallace Bradley chipped in 17 points and Sh’Qual White scored 11 in the losing cause.
STB was led in scoring by Mike Flemming with 24 points and Mike Volley chipped in 16 in the winning cause.
All three teams will be in action on Sunday, July 19. The first game will tip off at 4 p.m., followed by the second game at 5:30 p.m.
You Might Like