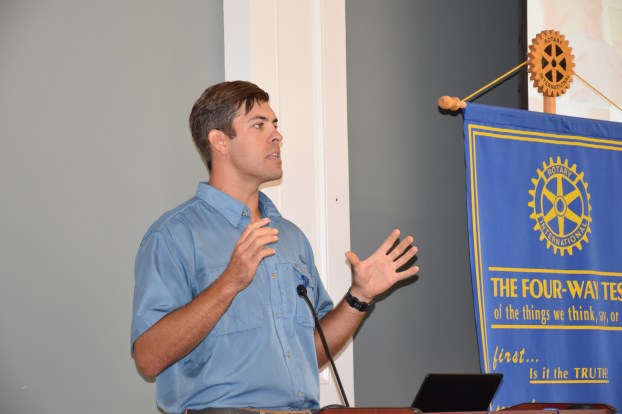 Jess McNeill addressed the Rotary Club of Americus recently to talk about how he is changing the way he farms using biological agriculture. After graduating with his bachelor’s and master’s degrees from UGA, he returned home to farm the same land as his family had for seven generations. It wasn’t long before he realized that they were producing the same kind of cotton that his great grandfather had with similar yields; however, the difference was evidenced in the margins as the cost to produce (equipment, gas, fertilizer and irrigation) was much higher than seventy years ago.

“While the last fifty years in agriculture have seen vast improvements in technologies (mechanical, seeds, chemistries, and other advances), one thing we have forgotten as we ramped up production and that’s the land,” remarked McNeill. “While we have made huge strides in chemistries and seed treatments, we have taken the soil for granted and yields have plateaued.”

It was then that he knew that for the next generation to make a good living, and to sustain a farm that would be a viable source of support for his family, something had to change. It got him to start thinking in a different way and was what led him to research biological agriculture – using bugs, fungi, and bacteria to get the same results that chemistries had done to accomplish the same thing. The research has been under the radar as most of the chemistries are in the hands of three large companies, none of which are American.

There are a lot of small, family-owned companies that have patents on bio-ag products and McNeill partnered with some and, as a result, started testing bio-ag inoculants for peanuts and saw unbelievable results. Out of these new partnerships, McNeill developed Legacy Ag with a mission to connect farmers/producers with products/companies that can help them become more independent, with specialization in biological agriculture.

Thousands of pounds of fertilizer have been put on the same land for seven generations, yet more is required each year. With all of the chemistries, product has been over-applied for years and the earth is starved of sugar/carbohydrates, which are the feed stock for the native biology in the soil. These sugars are safer, less expensive and do not require a hazmat suit or pesticide license to apply.

McNeill has seen, first-hand, the benefits of biological ag. He has cut fungicide use on peanuts by 50% and having some of the best yields while spending 25% less. Bio-ag is the way of the future and the consumers will begin to hear more about it as time goes on. “We are creating chemistries to fix problems created by chemistries in agriculture,” stated McNeill. With fifty years of doing it one way, it is time to turn back the clock. Now, McNeill is feeding the soil with biology (using carbohydrates) and the soil is saying “yes, thank you” and answering with a well-balanced growth medium that is creating a better crop, costing less, and creating a more secure family business. “It is a brand-new world” said McNeill. “This is the tip of the spear and I’m just scratching the surface.”

Did you know?  The little tab you pull to open your soda, soup or any other aluminum can makes a... read more