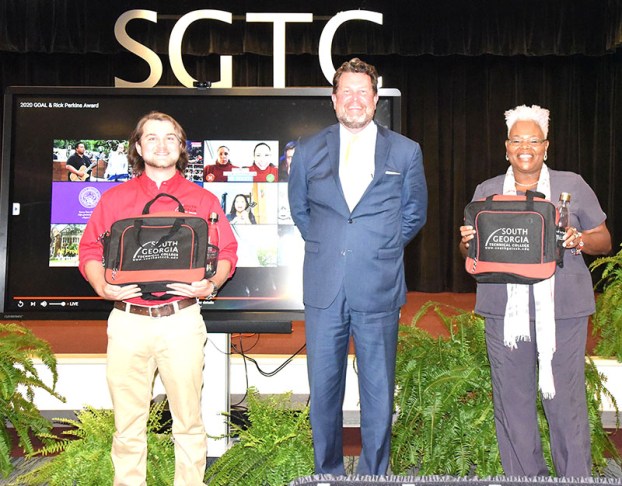 South Georgia Technical College President Dr. John Watford is shown above (center) congratulating SGTC 2020 GOAL student of the year David Bush and SGTC 2020 Rick Perkins Instructor of the Year Dorothea McKenzie, who has now advance to the state finals to be considered as the top instructor in the Technical College System of Georgia. Photo by Su Ann Bird

AMERICUS – Dorothea Lusane McKenzie, South Georgia Tech’s 2020 Instructor of the Year, was recently recognized as one of the top nine instructors in the Technical College System of Georgia (TCSG) by Commissioner Greg Dozier. McKenzie, who teaches Cosmetology at SGTC, will now compete for the state title.

McKenzie and SGTC 2020 Georgia Occupational Award of Leadership (GOAL) student David Bush were recognized along with 21 other Rick Perkins and GOAL winners from around the state by Commissioner Dozier during the virtual live regional announcement. The 22 top instructors and top students from across the state had participated in a regional judging competition prior to the COVID-19 pandemic. The competition where the regional winners and the overall state winner would be announced had to be cancelled due to the COVID-19 pandemic. The system made the statewide announcement for the regional winners virtually on YouTube.

As one of the top nine instructors in the state, SGTC’s McKenzie will now have the opportunity to compete for the State Rick Perkins award in September.  This is the first time since 2009 that South Georgia Technical College has had a regional winner in the Rick Perkins competition. SGTC Assistant Vice President for Student Affairs Vanessa Wall, who started the college’s Criminal Justice Program, was the last regional winner from SGTC and she is now the Rick Perkins/GOAL Coordinator for the college.

“We are so very proud of Dorothea Lusane McKenzie for advancing to the state finals of the Rick Perkins competition,” said South Georgia Technical College President Dr. John Watford. “She is a great representative of the faculty here at South Georgia Technical College and I hope each of you will extend your congratulations to her for representing SGTC as a finalist.  We are also very proud of David Bush for the way he represented the college at the regional competition.  He is a great representative of our students and we appreciate him serving as our top student for 2020.” 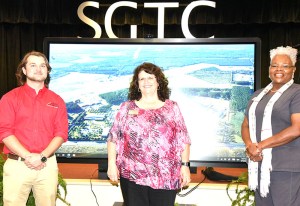 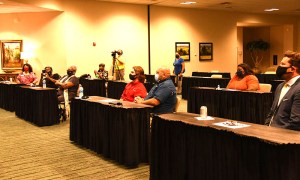 Crowd is shown waiting for the announcement.
Photo by Su Ann Bird

“Dorothea McKenzie has the respect of her students and her peers,” said President Watford. “She also has a tremendous work ethic. But one of the most profound things about her work is that so many of her students graduate and start their own businesses, and that kind of entrepreneurship is critical to economic development.”

The link to watch the TCSG announcement is at https://www.youtube.com/watch?v=D1qnY0cJ2Ps.

AMERICUS – At its monthly meeting on Tuesday, August 18, the Sumter County Board of Commissioners (BOC) voted to approve... read more