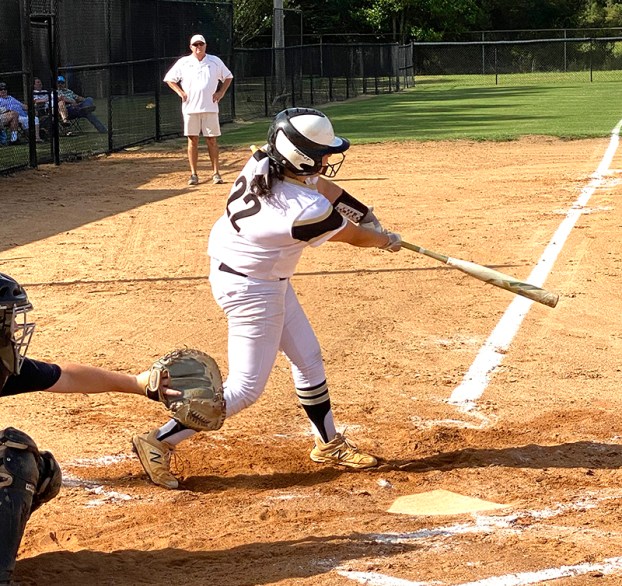 Southland Academy’s Katie Rogers went 3 for 4 at the plate with a double, two singles, an RBI and a run scored in the Raiders’ 13-8 loss to Valwood. Photo by Ken Gustafson

AMERICUS – The Southland Academy Raider Softball Team (SA) wanted to bounce back with a win against Valwood (VS) after a heartbreaking 6-5 loss at Brookwood the day before. Unfortunately for the Raiders, they got off to a slow start offensively in the first few innings and the Valiants took advantage by taking a 7-2 lead through four innings. VS put the game away in the fifth by scoring five runs on three hits and took advantage of an error. Though the Raiders battled back to make it close, it wasn’t enough as the Valiants went on to win 13-8 on Wednesday, August 26, at the Southland Academy softball complex.

In spite of the loss, SA Head Coach Rusty Tondee was extremely proud of the effort that his team put forth to try to make a comeback.

“We never gave up and I’m so proud of my girls for not ever giving up,” said Tondee. “We got behind early, but we showed a lot of guts. We hung in there with them and a few plays here or there, we’d have been right in the ball game there in the middle of the game. But we never gave up and that’s what I’m so proud of our girls sticking in there and just playing hard the whole entire game.” 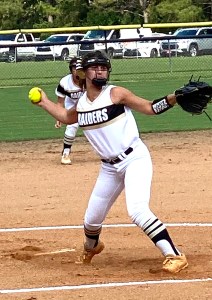 Southland Academy pitcher Ali Dent struck out one batter and walked another in the Raiders’ 13-8 loss to Valwood.
Photo by Ken Gustafson

The Valiants got off to a strong start in the top of the first inning. They scored three runs on four hits, including a two-run double by Gracie Booth.

The Raiders responded in their half of the first by scoring a run on an RBI single by Brookland Weaver, but VS responded with two more runs in the top of the third to take a 5-1 lead.

SA tried to get back in the game in the bottom of the third when they scored a run on an RBI triple by Brookland Weaver, but the Valiants countered with two more runs in the top of the fourth to take a 7-2 lead. 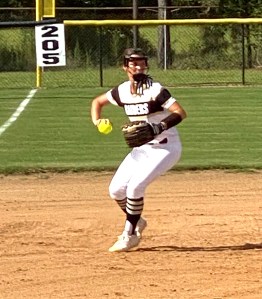 However, the Raiders would not go quietly. They scored two runs on three hits in the bottom of the fourth, including an RBI single by Morgan Minick and a sacrifice fly RBI by Storey to bring the Raiders to within three runs at 7-4.

However, that would be as close as SA would get for the rest of the game. The Valiants responded in the top of the fifth by scoring five runs to take a 12-4 lead, but that didn’t silence the Raiders.

In the bottom of the fifth inning, SA began its comeback bid. With one out, Reese Roland was hit by a pitch by VS starting pitcher Darcee Brown. Rogers then singled to advance courtesy runner Samantha Wojner to third. Brown then hit T.J. Bowden to load the bases for Morgan Weaver and Weaver was able to drive in a run on a sacrifice fly to center field, cutting SA’s deficit to 12-5.

Each team scored a run in the sixth and Storey, who had come in to pitch for Ali Dent in the fourth inning, was able to hold the Valiants in the top of the seventh. 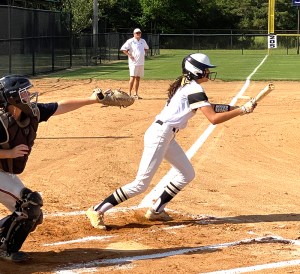 Southland center fielder Morgan Minick tries to get on. Minick went 1 for 4 with a single in the Raiders’ 13-8 loss to Valwood.
Photo by Ken Gustafson

With one out in the bottom of the seventh, Jadie Burrell was able to draw a walk and Minick was able to move Burrell over on a sacrifice bunt. Storey then drove in Burrell on a single and Dent followed that up with an RBI single to cut the Valiants’ lead to 13-8.

However, the comeback bid would fall short as Brookland Weaver grounded into a fielder’s choice to end the game.

It was a tough day for SA pitchers. Dent started in the circle for the Raiders and ran into trouble early. In three innings of work, she gave up five runs on 10 hits, with three of those runs being earned. Dent walked one batter and struck out another.

Storey came on in relief of Dent in the fourth, but also struggled. She gave up eight runs on eight hits, with four of those runs being earned. She walked five batters and struck out two. 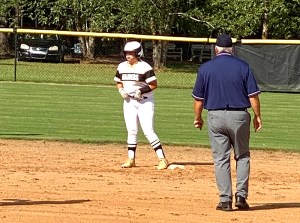 Katie Rogers stands at second base after hitting a double in the second inning.
Photo by Ken Gustafson

Both Dent and Brookland Weaver went 2 for 5 at the plate, with Dent driving in a run and Weaver driving in two. Minick and Morgan Weaver each earned a single in the game. They each drove in a run, while Weaver scored another.

Kaysie Goff and Jacoba Foster each notched four hits to lead the VS offense, while Ranada Vinson went 3 for 6 at the plate with an RBI and a run scored. 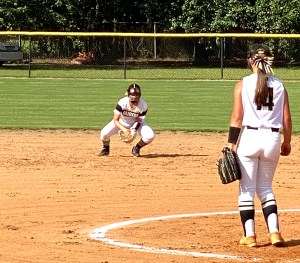 Southland shortstop Morgan Weaver fields a ground ball. Weaver went 1 for 2 with a single in the loss to Valwood.
Photo by Ken Gustafson

Darcee Brown went the whole way in the circle for the Valiants to get the win. She gave up eight runs on 12 hits, with seven of those runs being earned. She walked three SA batters and struck out two.

With the loss, the Raiders fall to 3-4 overall on the season and are 0-2 in Region 3-AAA play. They will travel up to Macon to take on Stratford Academy on Monday, August 31. First pitch is scheduled for 5 p.m.