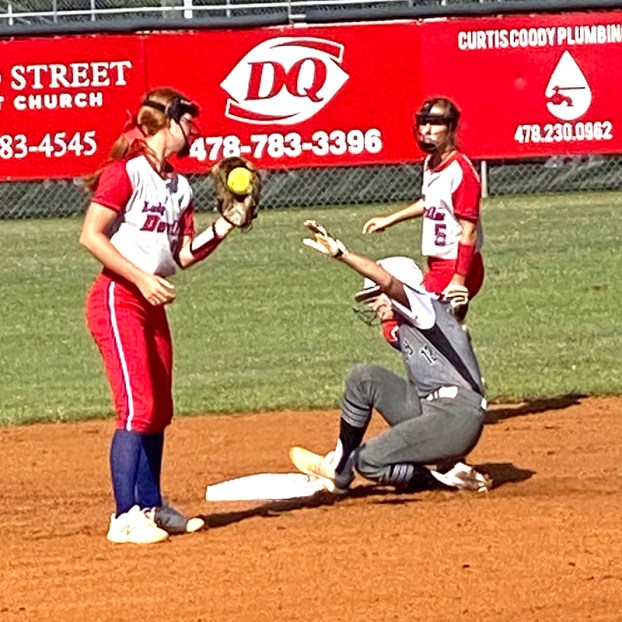 Schley County’s Perri DeVane steals second base in the top of the first inning against Hawkinsville. DeVane went 1 for 4 in the game with an RBI and a run scored. Photo by Ken Gustafson

HAWKINSVILLE, GA – After splitting a double header at Lee County on Saturday, the Schley County Wildcats softball team (3-5) traveled to Hawkinsville, GA on Monday, August 31, hoping to earn a win against Hawkinsville High School (HHS) and to get themselves back to .500 at 4-4. However, the Red Devils took advantage of an error in the bottom of the fifth, which led to five runs on three hits. Though SCHS tried to come from behind in the sixth and seventh innings, they were unable to do so and fell to the Lady Red Devils 6-4 at Hawkinsville High School.

For SCHS head coach Jody Sellars, this was a disappointing loss due to the fact that he has seen his squad perform much better than they did in this game. “We started the inning off with an error. Errors will kill you,” said Sellars. “On the first play, we made an error and it got them (HHS) going. Their bottom of the lineup did a good job staying back hitting balls through the middle and right side of the field, setting things up. They were able to scratch a couple that we weren’t able to overcome. I told my girls that we need to make better adjustments. We’re a much better team than we showed today.”

Sellars went on to say that power rankings at the Class A-Public division have been taken out of the equation as far as wins and losses are concerned, making a loss like this one not as crucial as it once was.

“We’re better than what we showed today. It’s disappointing,” said Sellars. “But the good thing is we don’t have power rankings anymore, so a loss is just a loss. It doesn’t kill you like it has in the past and it’s a long season. We get to come back and play again tomorrow.” 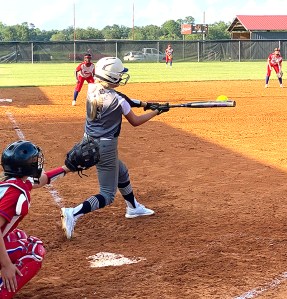 Schley County center fielder Darden Campbell went 1 for 3 with an RBI double in the Wildcats’ 6-4 loss at Hawkinsville.
Photo by Ken Gustafson

For the first three innings, it was basically a pitchers’ dual between SCHS starting pitcher Ashlyn Childs and HHS starting pitcher Katelyn Newman, but in the bottom of the fourth, the Red Devils drew first blood when Jenni Murkerson drove in Bailey McCleod on an RBI single to give HHS a 1-0 lead.

However, the Wildcats responded with four runs on four hits in the top of the fifth to take a 4-1 lead. After Hannah Crawford was hit by a pitch, Darden Campbell belted an RBI double to left field to tie the game at 1-1. Perri DeVane followed that up with an RBI single to give SCHS a 2-1 lead. Later on in the inning with two outs, Berkley Goodin doubled to center field, scoring DeVane. Then Zoe Molina knocked in the Wildcats’ fourth run on an RBI double.

Unfortunately for SCHS, they would not score another run for the rest of the game.

In the bottom of the fifth, Samantha Dokey reached on an error to lead things off for the Red Devils. Later on in the inning, HHS scored five runs on four hits, including a two-run double by Murkerson. That fifth inning explosion was enough to cost the Wildcats the game.

SCHS tried to make a comeback, but over the next two innings, Newman limited the Wildcats to just one hit on her way to getting the win and sealing the 6-4 victory for the Red Devils. 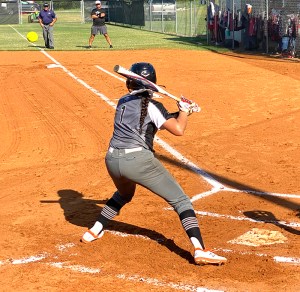 Schley County’s Zoe Molina went 2 for 3 with a double and an RBI in the Wildcats’ 6-4 loss to Hawkinsville.
Photo by Ken Gustafson

Molina led the Wildcats offensively by going 2 for 3 at the plate with a double and an RBI. DeVane, Goodin and Darden Campbell each tallied one hit with an RBI and a run scored, while Hannah Crawford went 1 for 2 with a single and a run scored.

Ashlyn Childs, who started in the circle for the Wildcats, gave up four runs on six hits and walked a batter in a little over four innings of work. Three of those four runs were unearned.

McKenna Wurtz came on to pitch in the bottom of the fifth and gave up two runs on three hits. Perri DeVane was the final pitcher of the day for SCHS and did not give up any runs or hits. 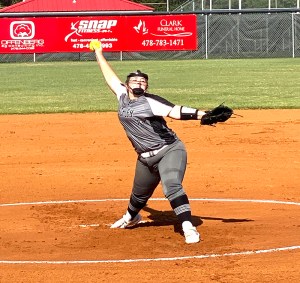 Schley County starting pitcher Ashlyn Childs pitched three scoreless innings before the Red Devils scored a run in the bottom of the fourth to take a 1-0 lead.
Photo by Ken Gustafson

For the Red Devils, they were led offensively by Murkerson, McLeod and Newman, who all went 2 for 3 at the plate and combined for five RBIs. Newman pitched the entire game for HHS to get the win. She gave up four runs on six hits, walked one batter and struck out one.

There will be no time for regrets for the Wildcats, as they will hit the field again for an important region game on Tuesday, September 1, at Marion County. First pitch from Buena Vista is scheduled for 5 p.m.

AMERICUS – On Friday afternoon, August 28, the Americus Kiwanis Club (AKC) was treated to a speech from Rod Murray,... read more