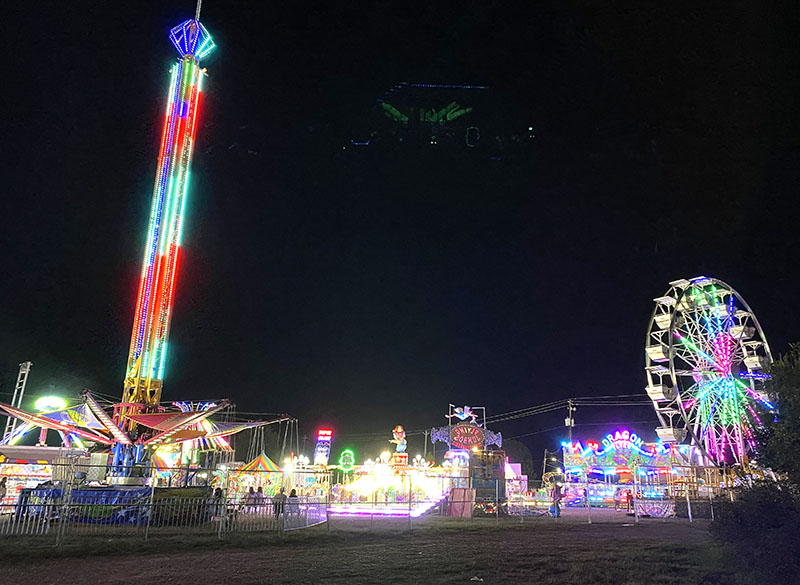 The Southwest Georgia (SOWEGA) Fair will be going on from Friday September 4 through Sunday, September 13. The fair is located on private property near the corner of Forsyth and Mayo Street. Both the county and the city of Americus denied Andrew Stringfellow, the fair’s owner and operator, a permit to set up the fair in Sumter County. However, Stringfellow was still able to find a way to set up the fair on private property. Photo by Ken Gustafson

AMERICUS – On Tuesday, September 8, the Sumter County Board of Commissioners (BOC) conducted its monthly work session via a Zoom conference call. Due to the COVID-19 pandemic, the BOC is still holing its meetings virtually. At Tuesday night’s work session, BOC Chairman Clay Jones, along with other commissioners, expressed their displeasure that Andrew Stringfellow, the operator of the Southwest Georgia (SOWEGA) Fair, was allowed to set up the fair in Americus after both the BOC and the city of Americus had denied him a permit due to concerns over COVID-19.

Commissioner Thomas Jordan was not able to participate in the work session due to technical difficulties with the Zoom system.

Jones asked Sumter County Parks and Recreation Director Tim Estes how Stringfellow was allowed to set up the fair in Americus after both the county and the city had denied him a permit to do so.

“They ended up renting where they’re at now, which is private property,” said Estes.

Jones replied by saying that he has a problem with Mr. Stringfellow. “If he wants to put our county in jeopardy like that, it’s just my opinion, I’ve got a problem with him. When he comes back to solicit next year, I’m going to have a problem with him trying to go to the fairgrounds,” said Jones.

Jones asked County Attorney Kimberly Reid if the city or county governments have any legal recourse to keep this from happening in the future, even if it is on private property. Jones also told Reid that one of the city council members told him that they would try to come up with some sort of ordinance to keep this from happening again. Reid replied that it is possible to do that, but it would depend upon what is currently in the ordinance. “They can always require a permit for that sort of thing and have certain regulatory criteria,” said Reid. “And especially with COVID, they could also implement certain requirements for what you have to do. There are some legal options for them to do that, even on private property.” 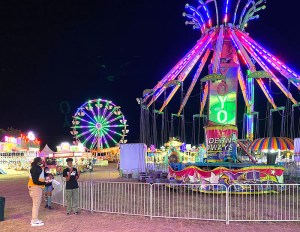 This is a picture of some of the rides at the SOWEGA Fair.
Photo by Ken Gustafson

Commissioner Mark Waddell stated that whether an event is being held on private property or not, in Americus, one has to have a permit. “In the city of Americus, you’ve got to have a permit to breathe most days,” said Waddell. “I can’t believe they couldn’t stop that. I mean you can’t even hammer a board on the side of your house without a permit. You’re going to put a whole event together?”

Commissioner Scott Roberson echoed Waddell’s opinion by saying that he was very shocked when he drove through town and saw the fair. Jones stated that one of the members of the Americus City Council told him that they had tried everything to keep the fair from being staged in Americus, but were unsuccessful.

“I’m saying that when they come again, we need to be ready for them,” said Jones.

“I asked the hospital authority to block off the old hospital parking lot down on Mayo Street. Then I asked that church right down on the corner of Mayo, Good News Ministries, and he put some fencing around his parking lot.”

Estes commented that he was told that on Saturday, September 5, the fair drew a crowd of 1,100 people. Hearing that figure, Jones expressed his concern as to how a crowd that size would be able to practice social distancing. Jones told Reid that he would meet with her to see if they could come up with some type of ordinance to keep this from happening again.

In other news from the work session, the BOC heard from Col. Eric Bryant of the Sumter County Sheriff’s Office about the possibility of installing portable speed bumps in certain parts of the county where there are high rates of speeding.

Bryant told the BOC that he and Public Works Director Jim Littlefield have been fielding complaints from residents about people speeding through their neighborhoods. “In the midst of looking at some different vendors and supplies, we found a set of portable speed bumps that could be located remotely to different areas over a certain period of time,” said Bryant. He went on to say that he wanted to bring it to the attention of the BOC because a lot of leg work still needs to be done in regards to policies and ordinances, but he wanted to see whether any of the commissioners had any thoughts or concerns regarding the installation of portable speed bumps in certain neighborhoods.

Chairman Jones responded by saying that he though it was a good idea and that he liked the fact that they could be installed for a while until the speeding died down and then they could be transported to a different location. The other commissioners thought that it was a good idea as well. Jones asked Bryant how much the speed bumps would cost and Bryant replied that they are eight to 10-feet long and would cost $167 a piece. “Right now, we have two sets and that would cover one road,” said Bryant. “But if we decide to move forward with this project, then we’re probably looking at investing in at least three to four sets.” Bryant added that he would get back in touch with the BOC concerning this matter.

In other items, the BOC approved an agreement between the Georgia Department of Transportation (GDOT) and Sumter County for roundabout lighting assistance for State Route 30 at County Route 311/Lamar Road. County Operations Administrator Rayetta Volley reminded the BOC that it had approved the lighting assistance of a roundabout on Highway 49 back in December of 2013. Chairman Jones asked the commissioners how they felt about this and they all had no problem with approving this agreement. Commissioner Roberson made a motion for approval and Commissioner Torbert seconded the motion. The BOC took a vote and the approval passed unanimously.