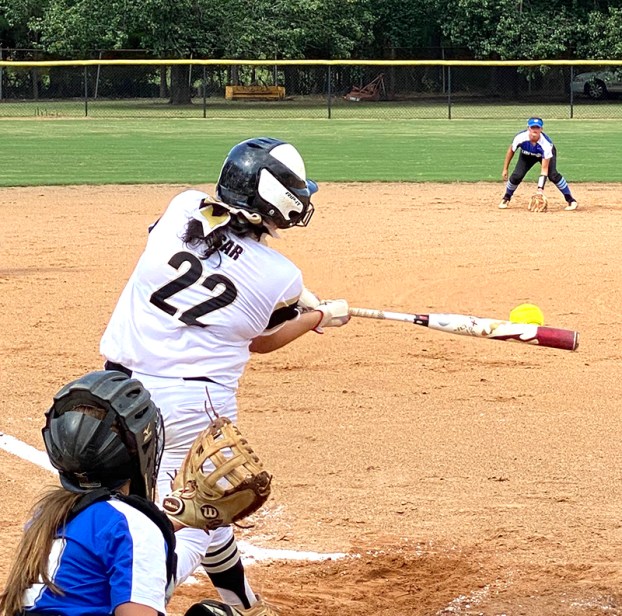 Southland Academy catcher Katie Rogers went 2 for 4 at the plate with two singles and a run scored in the Lady Raiders’ 8-4 loss to Southwest Georgia Academy. ATR Archive

AMERICUS – The Southland Academy Lady Raider Softball Team (SA) got off to a good start in the bottom of the first inning when Morgan Minick scored the first run of the game off an error. However, the Lady Warriors of Southwest Georgia Academy (SGA) responded with a vengeance by scoring six runs in the top of the second inning. While the Lady Raiders were able to get to within four runs, it was not enough as the Lady Warriors went on to win 8-4 on Thursday, September 10, at the Southland Academy softball complex.

In that second inning, SGA was able to score six runs on three hits, but they also took advantage of four walks and a hit batsman.

In the top of the third, the Lady Warriors added to their lead. With one out, Gillian Still doubled to left field and Lauren Godwin singled to left field, putting runners on second and third for SGA. Then Kamryn Carver drove in Still on a fielder’s choice to extend the SGA lead to 7-1.

SGA added another run in the top of the fifth, but the Lady Raiders fought hard to get back into the game. In the bottom of the fifth, Reese Roland singled with two outs and Katie Rogers reached on an error, putting runners at first and second for the Lady Raiders. T.J. Bowden took advantage of the situation by belting a two-run double to center field to bring SA to within five runs at 8-3.

Then in the bottom of the sixth inning, Jadie Burrell led off with a single and Minick was able to reach on an error. Just like that, the Lady Raiders had runners at first and second with nobody out. Sarah Beth Storey took advantage of the situation by driving in Burrell on an RBI single to left field. However, Minick was tagged out on the play when she tried to advance to second. Holly McCain, who returned to the lineup after recovering from an illness, drew a walk to put runners on first and second with one out. However, SGA pitcher Lauren Godwin was able to strike out Brookland Weaver and Roland popped out to shortstop to end the inning.

The Lady Raiders were able to hold SGA in the top of the seventh and threatened in the bottom half of the inning when Rogers led off with a single. However, Bowden flew out to center field, Morgan Weaver grounded out and Burrell flew out to left field to end the game.

Rogers went 2 for 4 at the plate with two singles and scored a run to lead the Lady Raiders’ offensive attack and Minick went 1 for 2 with a run scored.

In total, the Lady Raiders scored four runs on 10 hits and committed no errors.

Storey went the whole way in the circle for SA. She gave up eight runs on 11 hits, walked four batters and struck out two.

Mary Mac Cooper led the Lady Warriors’ offensive attack by going 3 for 4 at the plate with a double, two singles, three RBIs and a run scored.

Godwin started in the circle for SGA. She gave up four runs on 10 hits, walked four batters and struck out one.

With the loss, the Lady Raiders fall to 4-6 on the season, while SGA improves its record to 9-3.

The Lady Raiders will try to rebound from this setback when they host Westwood on Tuesday, September 15 at 4 p.m.

From Staff Reports     BUTLER, GA – After a heartbreaking loss to Crawford County on Wednesday, September 9, the... read more