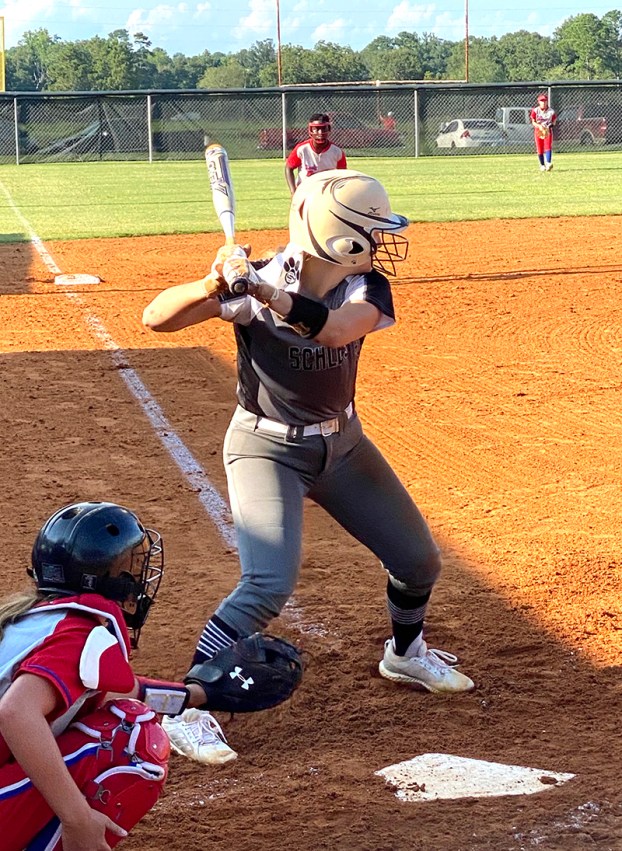 Schley County second baseman Jade Sellars went 2 for 5 at the plate with a triple, a double, four runs scored and two RBIs to help Lead the Lady Wildcats to an 11-5 victory over Taylor County. ATR Archive

BUTLER, GA – After a heartbreaking loss to Crawford County on Wednesday, September 9, the Schley County Lady Wildcat Softball Team (SCHS) did not have much time for tears due to the fact that they had to travel up to Taylor County (TC) the very next day to take on the Lady Vikings in another region tilt. Fortunately for the Lady Wildcats, they got off to a strong early start in the game by scoring five runs in the second inning to take a 7-0 lead. They were able to stay in control the rest of the way and left Butler with an 11-5 victory, thus flushing out of their system the difficult loss the day before.

The Lady Wildcats jumped out to a 2-0 lead in the first inning, thanks to a leadoff double by Perri DeVane and two singles by Zoe Molina and Landry Whaley. In the game’s pivotal second inning, SCHS used RBI doubles from Jade Sellars and Rene Rix to jump out to a 6-0 lead. Then Madison Walker reached on an error, allowing Rix to score and the Lady Wildcats to increase their lead to 7-0. Another factor that contributed to the Lady Wildcats’ five-run explosion was the fact that they were able to take advantage of three errors committed by TC.

The Lady Vikings scored two runs in the bottom of the fourth inning, but SCHS responded with two more in the top of the fifth. DeVane doubled to center field and Sellars belted an RBI triple. Molina then reached on another TC error, allowing Sellars to score and increasing the Lady Wildcats’ lead to 9-2.

The Lady Vikings scored another run in the bottom of the fifth and two more in the seventh, but it would not be enough as SCHS went on to win 11-5.

The Lady Wildcats scored 11 runs on 10 hits, but were also able to take advantage of a total of eight errors committed by TC.

With a big early lead, SCHS Head Coach Jody Sellars was able to give four pitchers some valuable work in this game. Ashlyn Childs started the game in the circle for SCHS. She gave up no runs or hits and struck out one batter in two innings of work. Lizzie Barineau, Makena Wurtz and Lynzie Woody each got valuable pitching experience in this game.

Caroline Albritton led the Lady Vikings offensively. Albritton went 2 for 3 with a double, a triple, three RBIs and one run scored.

The Lady Wildcats are now 5-7 on the year and will try to extend their winning streak when they travel to Cochran, GA to take on Bleckley County in a non-region game on Monday, September 14. First pitch is scheduled for 5:30 p.m.

Panthers get manhandled by Hardaway in season opener

COLUMBUS – There were some who thought this day would never come, but for the Americus-Sumter High School football team... read more