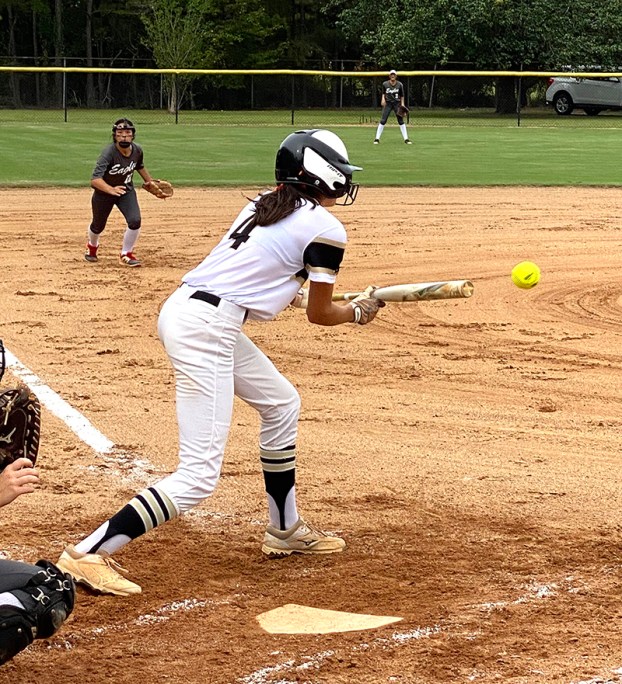 Lady Raiders get shut out by Stratford Academy

AMERICUS – The Southland Academy Lady Raider Softball Team (SAR) came into Monday’s home game against GHSA opponent Stratford Academy (STRA) with hopes of ending a two-game losing streak. However, the SAR hitters could not solve the pitching of STRA starting pitcher Kenna McElmurray. McElmurray gave up three hits and struck out 13 Lady Raiders to lead the Lady Eagles to a 7-0 shutout of SAR on Monday, September 14, at the Southland Academy softball complex.

“They (STRA) do have a good pitcher. We have faced some really good pitching lately,” said SAR Head Coach Rusty Tondee. “We just weren’t able to get as many hits put together. It’s just tough. We had the bases loaded one time. We had runners at first and second a couple of times. We didn’t get that timely hit when we needed it, but that’s a Final Four team from last year. That’s a really good softball team.”

The Lady Eagles jumped out to a 4-0 lead in the top of the first inning. Leadoff hitter Shelby Bandt reached first on a dropped third strike. Abby Griffin then reached on an error and the Lady Eagles had runners at first and second with nobody out. McElmurray then singled to center field to load the bases for Taylor Justice. Justice took advantage by ripping a two-run double to right field to give STRA an early 2-0 lead. 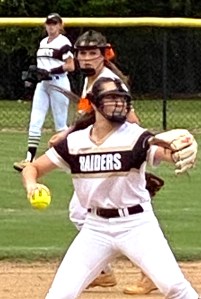 After SAR starting pitcher Sara Beth Storey got Mazzy Sowell to ground out to third for the first out, Shorter McCook got hit by a pitch and McElmurray scored on a wild pitch, giving the Lady Eagles a 3-0 lead.

Justice capped off the four-run inning for STRA when she scored on a fielder’s choice by Haylee Grace Cole to give the Lady Eagles a 4-0 lead.

STRA added another run in the top of the fourth inning when Mary Spencer Reeves knocked in a run on an RBI double, but in the bottom of the fourth, the Lady Raiders had a chance to put runs on the board, as leadoff hitter Morgan Minick executed a bunt single. Later on in the inning, shortstop Holly McCain, who returned to the SAR lineup after recovering from an illness, singled to left field to put runners at first and second with one out. However, the Lady Raiders could not take advantage, as Brookland Weaver grounded into a fielder’s choice and Reese Roland struck out to end the inning.

Storey was able to retire the next three Lady Eagles in order in the top of the fifth, thus giving her team another chance to score in the bottom half of the inning. 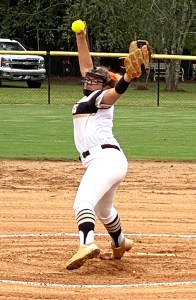 Things began well for the Lady Raiders, as Katie Rogers led off their at bat in the bottom of the fifth with a single and Alli Dent executed a sacrifice bunt, advancing Rogers to second. McElmurray was able to strike out T.J. Bowden for the first out, but hit Morgan Weaver to put runners at first and second for SAR. Jadie Burrell then reached on an error to load the bases for Storey. However, Storey was unable to come through, as she struck out to end the threat.

The Lady Eagles added two more insurance runs in the top of the sixth when McElmurray belted a two-run double to complete the 7-0 win.

In total, STRA scored seven runs on eight hits and committed one error, while the Lady Raiders went scoreless with three hits and one error.

Minick, McCain and Rogers were the only three Lady Raiders to get hits off McElmurray, who went the distance for STRA to get the win. 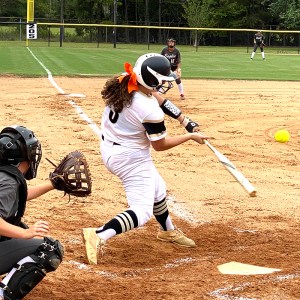 Southland Academy shortstop Holly McCain returns to the Lady Raiders’ lineup after recovering from an illness. McCain went 1 for 2 with a single against Stratford Academy.
Photo by Ken Gustafson

In addition to her dominance in the circle, McElmurray also got it done at the plate for STRA. She went 2 for 4 with two doubles, two RBIs and a run scored.

With the loss, the Lady Raiders fall to 4-7 on the season, while the Lady Eagles improve to 9-6.

“We played hard. We gave great effort. It’s just that we came up a little bit short against a really good team,” said Tondee.

The Lady Raiders will not have time to think about what might have been. Instead, they will host Westwood in a doubleheader on Tuesday, September 15. The first pitch for Game 1 is scheduled for 4 p.m., followed by Game 2 at 6 p.m. Then on Thursday, September 17, SAR will host Brookwood at 4:30 p.m.