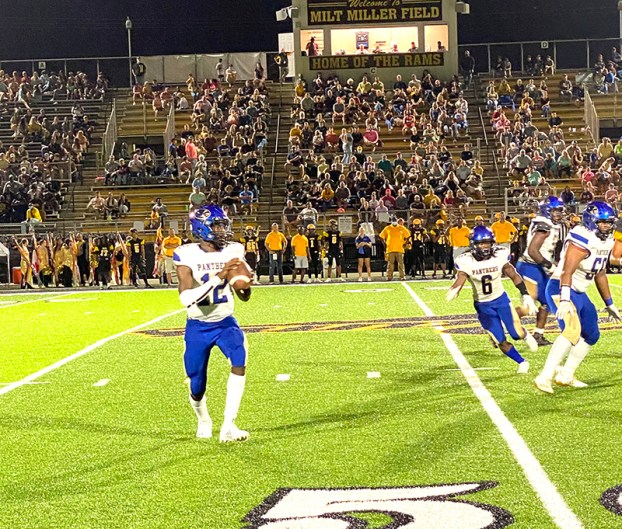 Americus-Sumter sophomore quarterback Cameron Evans rolls to his right looking to make a throw. Evans was injured in the third quarter and had to leave the game. Photo by Ken Gustafson

SYLVESTER, GA – The Americus-Sumter Panthers (ASHS) were not expecting to play football on Friday night, September 18. However, on Monday, September 14, ASHS Head Coach Ross Couch received a call from Worth County (WCHS) Athletic Director Frankie Carroll asking him if his team would like to play a game with them. With his club needing and wanting more game experience, Couch was more than happy to oblige. Unfortunately for the Panthers, they committed two costly turnovers against the Rams and were done in by a big play in the fourth quarter. Those factors, among others, resulted in a 21-7 defeat at the hands of WCHS at Milt Miller Field in Sylvester, GA.

To make things worse, two of the Panthers’ key contributors, quarterback Cameron Evans and wide receiver Michael Johnson, were forced out of the game due to injury.

For ASHS Head Coach Ross Couch, it all boiled down to missed opportunities.

For the entire first quarter, neither team could put any points on the board, but the Panthers were able to make some big stops on defense and a couple of those plays were made by Jarod Lewis, who also scored the Panthers’ only touchdown of the game on a 76-yard punt return. 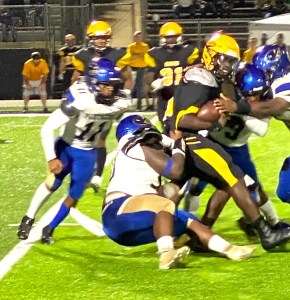 Americus-Sumter senior defensive lineman Kameron Dunnings tries to make a tackle on the WCHS running back.
Photo by Ken Gustafson

However, early in the second quarter, the Rams struck first. Their defense forced a fumble by the Panthers and they were able to move the ball down inside the ASHS 15-yard line. They eventually drew first blood when quarterback Jordan Curry scored a rushing touchdown. The extra point by Riley Mason was good and WCHS had a 7-0 lead.

Later on in the quarter, ASHS turned the ball over again when quarterback Cameron Evans’ pass was intercepted by Curry, who also plays safety for the Rams on defense.

That gave WCHS the opportunity to put more points on the board, which they did. The Rams moved the ball down inside the ASHS 10-yard line and capped off the drive with a rushing touchdown by Shaun Harrell. Mason’s extra point attempt was good and WCHS had doubled its lead to 14-0.

The Panthers tried to mount a drive to get points near the end of the half, but were unable to do so and went into halftime trailing 14-0. 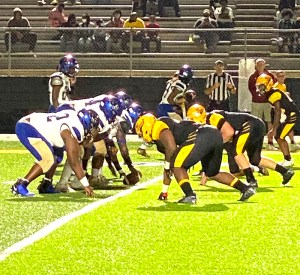 The Americus-Sumter offense tries to mount a drive late in the first half.
Photo by Ken Gustafson

However, ASHS scored on a special teams play in the third quarter. With about eight minutes remaining in the quarter, Lewis returned a punt 76 yards for a touchdown. The extra point by Alex Vasquez was good and the Panthers were back in the game, trailing 14-7.

However, with about six minutes left in the third quarter, the Panthers took a big blow, as Evans was injured when he was hit out of bounds. This meant that freshman Anthony Tyson would be going the rest of the way at quarterback for ASHS.

In addition to losing Evans, the Panthers also lost senior wide receiver Michael Johnson, who was injured earlier in the game.

“Losing a two-way starter and all-region player in Mike Johnson early in the game to injury limited some of the things we were able to do,” said Couch. “And starting QB Cam Evans going down put a lot of pressure on our freshman backup (Tyson), who is also a starter on defense. I thought their replacements did a good job of stepping up when their number is called and making some plays.” 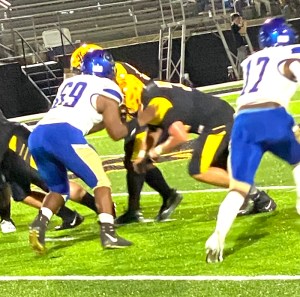 However, in spite of the situation, the Panther defense came up big on the Ram’s next possession. On third down, Lewis, who serves as a defensive back for ASHS, was able to sack Curry, forcing WCHS to punt with a little over a minute left in the third quarter.

Midway through the fourth quarter, the Panthers had the ball on their own 17-yard line before Tyson made a big play when he threw a short pass to tight end Kadarius King, who ran the ball across the ASHS 40-yard line. However, the play was nullified due to a holding penalty. That penalty proved to be costly for ASHS, as they ended up having to punt the ball back to the Rams with 7:16 to go.

“Penalties really hurt us this week,” said Couch. “We’d start moving the ball effectively or have a big third down stop and we’d lose that momentum.” 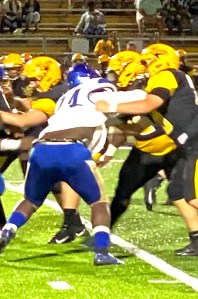 Americus-Sumter senior defensive lineman Mendrell Minnis tries to fight past his blocker to make a play.
Photo by Ken Gustafson

On the Rams’ next possession, they nearly gave themselves a chance to put the game away when Curry threw a couple of long passes to receivers down near the goal line. Fortunately for the Panthers, Lewis broke up Curry’s first pass and he overthrew his receiver on the second one.

With a little over six minutes left in the game, the Panthers had another chance to mount a drive to tie or take the lead. They were able to move the ball up close to midfield on short passing plays by Tyson. Then on first and 10 from the ASHS 43, running back Christian Waymon ran the ball across midfield to the WCHS 46. However, on the next play, Tyson was flagged for intentional grounding, as he was forced to throw the ball out of bounds with no receiver in the area. That proved to be another costly penalty for the Panthers, as they were forced to punt with 3:48 to go in the game. It would be up to the Panther defense to give the offense one last chance to get a tying or go-ahead score.

However, on third down and six from the WCHS 21-yard line, Curry looped a touch pass over an ASHS defender and into the arms of wide receiver Tayshaun Shipp, who ran the ball all the way into the end zone for a Rams touchdown.

That play would end up being the backbreaker for the Panthers.

However, ASHS didn’t quit. On the ensuing kickoff, Lewis broke free for another long return into WCHS territory, giving ASHS faint hopes of making a comeback. However, the WCHS defense stopped the Panthers on their last possession and ran out the clock to win the game.

With the loss, the Panthers fall to 0-2 on the season, while the Rams improve to 2-0.

As of right now, ASHS is not scheduled to play another game until Friday, October 2 when they will host Central (Macon) in their first home game of the season. Kickoff for that game is scheduled for 7:30 p.m.

AMERICUS – After the Americus-Sumter High School Football Team lost two games on its 2020 schedule due to the COVID-19... read more