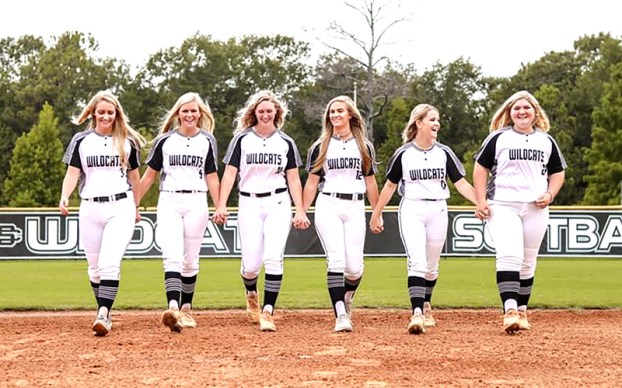 ELLAVILLE – For the six seniors on the Schley County High School softball team (SCHS), the Lady Wildcats’ win over Marion County (MC) on Senior Day will be fondly remembered. With SCHS leading 5-0 in the bottom of the third inning, the Lady Wildcats scored seven more runs on three hits and took advantage of three walks and three errors to complete a 12-0 shutout of the Lady Eagles on Tuesday, September 22, at Schley County High School on Senior Day.

For Jade Sellars, Darden Campbell, Perri DeVane, JoDee Howard, Ashlyn Childs and Rene Rix, it was a great way to be honored for their accomplishments as Lady Wildcats.

It was a day in which the team, led by these seniors, came out swinging the bats.

“You tend to force errors when you hit the ball well,” said SCHS Head Coach Jody Sellars. “We’ve shown some flashes of swinging the bat really well at times. At other times, we haven’t, but we came out swinging the bats from the first pitch of the game. When you put the ball in play with authority, they make errors. I told them that at the beginning of the game and that’s any team, for the most part. We executed really well on offense, played a clean defensive game.” 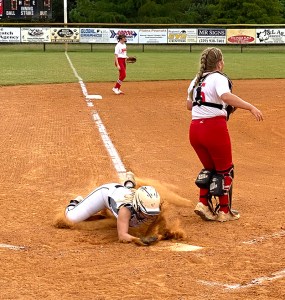 Coach Sellars went on to praise the pitching of senior starting pitcher Ashlyn Childs, who pitched four scoreless innings, giving up three hits and striking out one batter.

“Childs stayed a head, worked ahead and let the defense make plays,” said Sellars. “That’s probably one of the cleanest games we’ve played all year in every facet of the game. We’ve got to be clean. We don’t have a pitcher that’s going to strike out 10 to 15 girls so we’ve got to play good defense and we’ve got to make things happen on offense.”

The Lady Wildcats scored their first run in the bottom of the first. They got singles from DeVane and Sellars to put runners on first and second with nobody out. Then Zoe Molina reached on an error. That allowed the runners to move to second and third. After Landry Whaley flew out for the first out, Sellars was able to score on another MC error. Berkley Goodin flew out to center field and DeVane was thrown out trying to steal home, but the Lady Wildcats had taken a 1-0 lead. 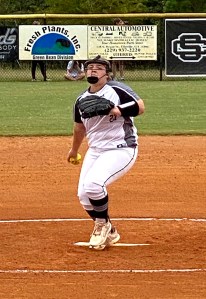 In the bottom of the second, SCHS scored four more runs on four hits and took advantage of another error by the Lady Eagles. Madison Walker and Hannah Crawford led off the inning with back-to-back singles. Then Darden Campbell reached on an error by the MC third baseman, which allowed Walker to score.

Later on in the inning, Sellars drove in two more runs on a double to left field and Molina knocked in another run on an RBI single. By the end of the second inning, the Lady Wildcats had a 5-0 lead.

In the bottom of the third inning, SCHS blew the game open and ended it after four innings by scoring seven runs on three hits. They also took advantage of three walks and three more MC errors. 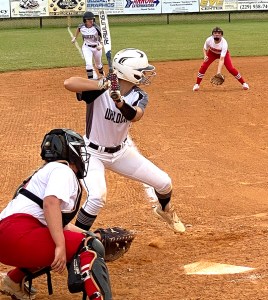 Schley County senior Perri DeVane went 2 for 3 with a run scored in the Lady Wildcats’ 12-0 victory over Marion County.
Photo by Ken Gustafson

For the game, the Lady Wildcats took advantage of seven errors committed by the Lady Eagles.

Up next for SCHS is another home game on Thursday, September 24, against Chattahoochee County. First pitch is scheduled for 5 p.m.

From Staff Reports     ELLAVILLE – For the first five innings of the game, the Schley County High School... read more