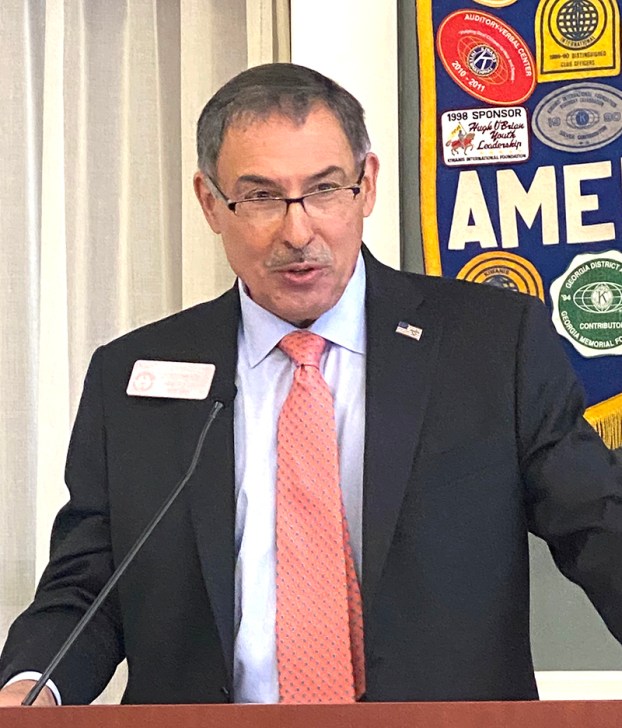 AMERICUS – On Tuesday, October 6, the Sumter County Chamber of Commerce held a forum at Georgia Southwestern State University (GSW) for several candidates who are running for public office in numerous positions. Two of these candidates are facing off against each other for the Georgia House of Representatives District 138 Seat: Representative Mike Cheokas, the incumbent republican candidate, and his democratic challenger, Marc Arnett.

Tesia Reed, a news anchor for WALB News Channel 10 in Albany, was the moderator for the debate.

The first question that Reed posed to both candidates had to do with whether or not they support the “Heartbeat Bill” which the Georgia Legislature passed during the 2019 Session. The bill stops abortions from taking place after a heartbeat is detected in the baby. The question was first posed to Representative Cheokas, who replied that he supported and voted for the Heartbeat Bill back then and is unapologetically pro life. The question was then posed to Arnett, who stated that he supports a woman’s right to choose. “I believe in choice. I believe that our people have the mind and the heart and the desire and the ability to be able to choose for themselves,” said Arnett. “I also believe that healthcare is important. Medicaid expansion is something that we need to address in our district.”

Arnett went on to say that too many mothers, daughters and granddaughters are going without health insurance and live unhealthy lives to the point where things such as the “The Abortion Bill” come into play. Arnett added that he believes that all of the constituents in the district need to be able to have access to affordable healthcare so that they can get the services that they need so they don’t have to resort to emergency room visits where things, in his words, “fall through the cracks.”

The next question that was posed to both candidates was this: Should Georgia expand Medicaid in light of what everyone has experienced during the COVID-19 Pandemic?

This question was first posed to Arnett and he started out by stating that he comes from a close-knit family and that he remembered very vividly the time when his family got the call that his Aunt had contracted COVID-19. “She works down in Albany and she was right in the heart of the city during the outbreak of the pandemic,” said Arnett. “They transferred her from the hospital down in Albany to the hospital in Augusta because we didn’t have the beds or the equipment that was necessary right here in our district. We didn’t have the resources necessary to take care of our people.” Arnett went on to explain that his Aunt spent weeks in the hospital in Augusta on a ventilator fighting for her life alone, but eventually survived the disease. “That isn’t the story for a lot of people across our state,” said Arnett. “I know personally people that have lost mothers, lost fathers. Some have lost both parents within weeks of each other. We owe it to ourselves. We can’t wait any longer. So the question isn’t should we expand Medicaid? The question is why haven’t we expanded Medicaid.” 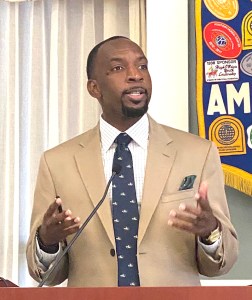 Marc Arnett is running as the democratic candidate for State Representative of District 138 in the Georgia House of Representatives.
ATR Archive

Arnett went on to say that the reason that Medicaid hasn’t been expanded is because politicians have put politics over people and have put their egos above their constituents. “Every year that we wait, we miss out on $3 billion. That’s right. Billions with a B,” said Arnett. “Dollars and money from the federal government that has been set aside for Georgians’ healthcare and Georgians’ healthcare coverage. We must close the coverage gaps in our state. We can’t wait any longer.”

The same question was posed to Representative Cheokas and he began his response by congratulating Arnett for his Aunt’s recovery from the virus. He then added that both of his daughters have contracted COVID. “My youngest daughter has recovered and my oldest daughter is recovering now and is being quarantined,” said Cheokas. “Let me tell you what we did do. We passed $100 million in emergency funding, took it out of the Rainy Day Fund to combat COVID-19.” Cheokas went on to explain that the state legislature passed legislation this year to lower prescription drug prices. He also stated that Medicaid is an expensive program and it only covers 250,000 Georgians. “What we did was we expanded the Waver Program, which provided healthcare coverage for 1,000,000 Georgians. That’s 750,000 more Georgians with healthcare coverage because of the expansion of the Waver Program,” said Cheokas. He added that four years ago, when President Carter was able to beat cancer by taking experimental drugs that were approved by the FDA but not available to everyone, he passed legislation called the Access to Healthcare Act, which provided access to experimental drugs to the citizens of Georgia if the doctor prescribes it. “Prior to that, insurance companies required you to go through a protocol. Under that protocol, a person with Stage 4 Metastatic Cancer would end up dying before completing it,” said Cheokas. He went on to say that the Access to Healthcare Act passed in 2016 and that he got emails from people all over the nation asking him how that legislation could be duplicated in their states. “My goal, if I’m successful this go around, is to do the same thing with the experimental drugs that we’re using that President Trump got administered last Friday, Saturday and Sunday and came home to the White House after receiving those drugs,” said Cheokas. He went on to reiterate that every American should have the access to these experimental drugs provided that they are FDA approved and a physician prescribes them.

When Representative Cheokas was asked why he should be reelected to represent District 138 in the Georgia House of Representatives, he began by thanking the Sumter County Chamber of Commerce and GSW for having the forum and then mentioned the various committees that he has served on since being elected and the various things that he has accomplished, including providing the funds to build the very building in which the forum was conducted. He mentioned that he not only was instrumental in getting several buildings at GSW built, but also at South Georgia Technical College as well. Cheokas also mentioned that he put $250,000 in the budget for the Sam Shoreline Train that runs from Cordele to Plains.

Cheokas mentioned that every year when budget cuts are talked about, cutting the funding for the Plains Welcome Center is discussed, but he added that the problem has been fixed because they took the funding out of economic development and put the money in state parks.

Cheokas also stated that he sees more budget cuts in the future due to the COVID-19 Pandemic. “When we closed the economy down, people lost jobs and we’ve got to correct that,” said Cheokas. “We’ve got to get this economy going back as quickly as possible and as safely as possible, but we’ve also got to make sure that we are not on the short end of the stick when it comes to budget cuts this coming January.”

Cheokas also mentioned that reapportionment is another big thing that he sees on the horizon. “We will probably be losing a representative in Southwest Georgia and I don’t want our district to be cut up,” said Cheokas. “So I’m going back to the capitol and will work very, very hard towards that.”

To sum it up, Cheokas stated that experience matters and that he has the experience to do the job as the State House Representative for District 138.

When Arnett was asked why he is the right candidate for the job, he stated that it’s one thing for one to list his accolades and accomplishments and how many buildings he has built, but it’s another thing to serve the community with or without a title and be in the trenches with the people.

Arnett went on to say that the schools in the district deserve to have an advocate that will fight to make sure that there is funding in the budget to provide the tools necessary to help the students succeed in life. He also stated that if elected as the new state representative, he will work to provide jobs with livable wages and will work to help lift people up instead of, in his words, cashing in on the backs of oppression, alcoholism and addiction. “You need someone who doesn’t shrink and hide in the face of adversity or a pandemic, a leader who will work across the aisle to make sure that every Georgian can go see a doctor when they need to without the fear of medical debt,” said Arnett. “You deserve someone who is not afraid of what we can become if we truly work together.”

Arnett finished his remarks by telling a story about a father and son who went to the zoo and saw all of the various animal exhibits. “When they came to the exhibit of the elephant, the father became angry and he wanted to see the zookeeper,” said Arnett. “So someone went and got the zoo keeper and the zoo keeper came and said ‘Sir, I understand you have an issue. What is that issue?’ The father explained that he was concerned that there was no barrier keeping the elephant in its place.” Arnett goes on to explain that the father was afraid that the elephant would jump over the barrier and hurt innocent people. However, Arnett explained that the zookeeper told the father that when the elephant was born, a chain was placed around its leg and another chain placed around the trunk of a tree. The zookeeper explained to the father that every time the elephant tries to go further than a certain distance, the chain on its leg will pull it back. When the elephant sees the tree, he will only go so far.

Arnett told this story to illustrate that, in his opinion, people feel that they can’t make a difference because of where they come from or their lack of experience, their youth or where they grew up. In other words, one can only achieve so much.

AMERICUS – On Tuesday, October 6, the Sumter County Chamber of Commerce hosted a series of debates in which the... read more