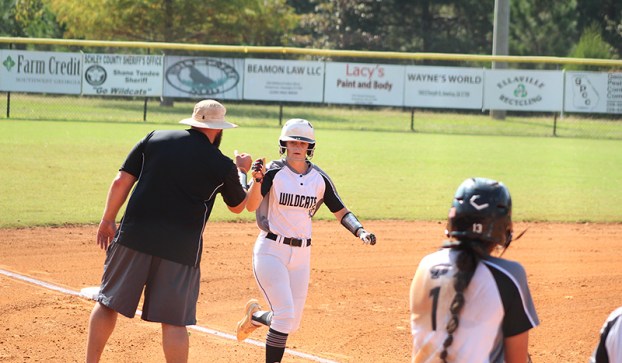 Schley County third baseman Perri DeVane gets a hand from her coach as she crosses home plate after knocking the ball over the center field wall for a solo home run in the Lady Wildcats’ 2-1 loss to Veterans. Photo by Sheila DeVane

ELLAVILLE – Having already clinched the Georgia High School Association (GHSA) Class A-Public Region 5 championship, the Schley County Lady Wildcat softball team (SCHS) hosted its last regular-season game against Veterans (VHS) on Tuesday, October 13, to get ready for the upcoming GHSA Class A-Public State Playoffs. However, the Lady Wildcats were edged out 2-1 by the Lady Warhawks in a pitchers’ dual.

With the score tied 1-1 in the top of the seventh, VHS loaded the bases before Victoria Vining singled to center field, driving in Olivia Brown for the go-ahead run.

The Lady Wildcats were not able to respond in the bottom of the seventh. Berkley Goodin flew out to center field, Rene Rix flew out to left field and Maddie Walker popped out to the shortstop to end the game.

The Lady Wildcats got off to a great start in the bottom of the first inning when Perri DeVane belted a solo home run over the center field wall to give SCHS a 1-0 lead.

However, that would be the only run of the game for the Lady Wildcats.

For the next five innings, both teams went scoreless. Then in the top of the seventh, Childs walked the VHS leadoff hitter, Olivia Brown. Madison Bunnell then executed a sacrifice bunt, moving Brown to second with one out. Kasey Gibson then singled to center field and the Lady Warhawks had runners at first and third with one out. After Hannah Wood popped out to first baseman Zoe Molina for the second out, Vining drove in what ended up being the winning run for VHS on an RBI single. 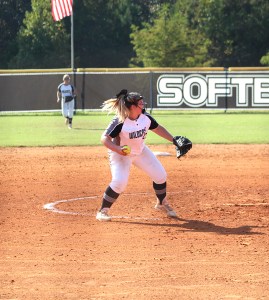 The Wildcats struggled to hit the ball in this game against VHS pitchers Madison Bunnell and Olivia Brown. They were only able to muster four hits for the game. DeVane, Molina, Rix and Jade Sellars each had one hit during the contest.

In total, the Lady Wildcats scored one run on four hits and committed one error.

The Lady Warhawks also struggled at the plate against SCHS pitching, as they were only able to score two runs on three hits from Bunnell, Gibson and most importantly, the game-winning RBI single from Vining.

The Lady Wildcats will now wait to find out when, where and who they will be playing in the first round of the GHSA Class A-Public State Playoffs. Stay tuned to the Americus Times-Recorder for further details.