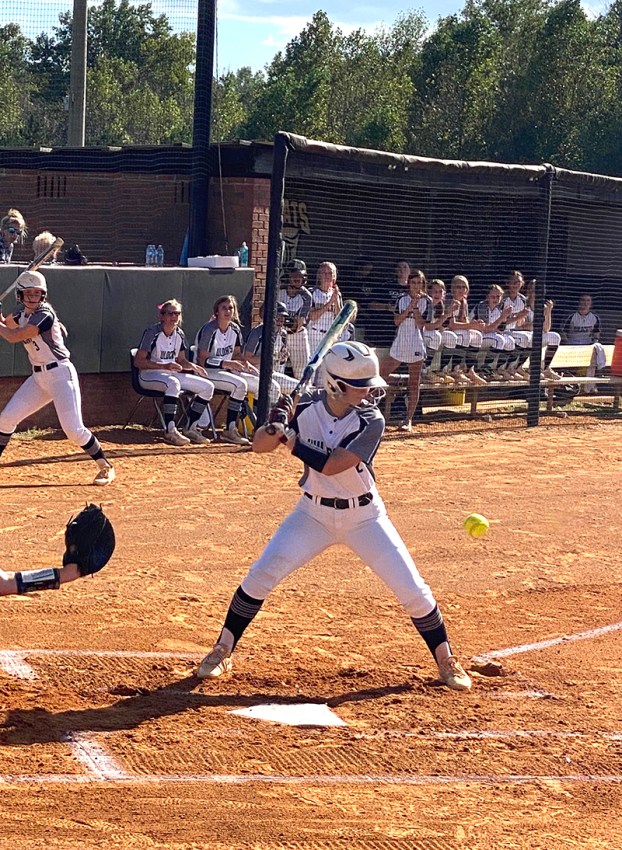 Schley County third baseman Perri DeVane went 2 for 4 with a double, a single, a run scored and two RBIs in Game 2 against Washington-Wilkes to help lead the Lady Wildcats to a 13-0 win in Game 2 and a berth in the second round of the state playoffs. Photo by Ken Gustafson

Then in the bottom of the third, the Lady Wildcats were able to take the lead for good. With two outs, Sellars doubled to left field and advanced to third base on an error by the WW left fielder. Zoe Molina was then able to drive home Sellars on an RBI single, giving the Lady Wildcats a 3-2 lead. Later on in the inning, Molina ended up stealing home to increase the SCHS lead to 4-2. 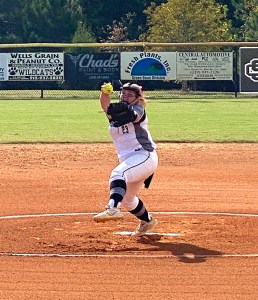 Schley County starting pitcher Ashlyn Childs limited the Lady Tigers to two runs in Game 1 to help lead the Lady Wildcats to a 5-2 victory over Washington-Wilkes.
Photo by Ken Gustafson

The Lady Wildcats added another run in the bottom of the fifth when Molina drove in DeVane on an RBI single to right field. That would be all the run production that SCHS would need, as starting pitcher Ashlyn Childs did not allow another WW run and helped secure the 5-2 victory in Game 1.

Molina led the Lady Wildcats’ offense in Game 1 by going 2 for 3 at the plate with two singles, a run scored and two RBIs.

Childs pitched the entire game for SCHS to get the win in Game 1. She gave up two runs on eight hits, walked one batter and struck out 3. 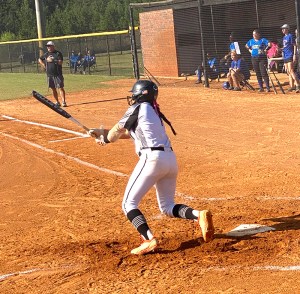 Schley County first baseman Zoe Molina went 2 for 3 with two RBIs and a run scored to lead the Lady Wildcats to a 5-2 victory over Washington-Wilkes in Game 1 of a best of three game series in the first round of the GHSA Class A-Public State Playoffs.
Photo by Ken Gustafson

Both Alana Callaway and Kariah Smith went 2 for 4 at the plate to lead the Lady Tigers’ offense. WW starting pitcher Ally Hucke took the loss. Hucke pitched all six innings, giving up five runs on six hits. She walked one batter and struck out three.

With one victory in hand, the Lady Wildcats were poised and ready to complete the sweep in this best of three-game series and did just that in Game 2.  SCHS jumped out to a 2-0 lead in the first inning when Landry Whaley belted a two-run home run over the left field wall.  Then in the third inning, the Lady Wildcats exploded for five runs on two hits, including a three-run home run by Rene Rix, to extend their lead to 7-0. 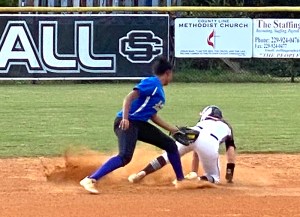 Then in the top of the fifth, SCHS put the game and the series away by scoring six runs on four hits and by taking advantage of three hit batsmen. With a 9-0 advantage and one out in the fifth, Darden Campbell and DeVane combined to drive in four runs on back-to-back doubles to secure a 13-0 shutout win for the Lady Wildcats and a trip to the second round of the GHSA Class A-Public State Playoffs.

Rix spearheaded the SCHS attack by going 2 for 3 at the plate, including the three-run homer in the third inning. She drove in a total of four RBIs and scored two more runs. Landry Whaley went 1 for 2 with the two-run homer in the first and DeVane went 2 for 4 with a double, a single, two RBIs and a run scored. 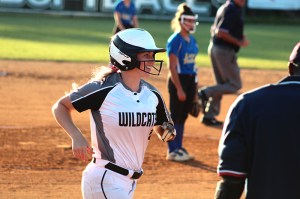 Schley County’s Rene Rix belted a three-run homer in the third inning of Game 2 to help lead the Lady Wildcats to a 13-0 win over Washington-Wilkes.
Photo by Sheila DeVane

Campbell went 1 for 3 with a run scored and two RBIs and Maddie Walker went 1 for 2 with a single. JoDee Howard was also productive for the Lady Wildcats, as she drove in a run on a fielder’s choice and scored two more. 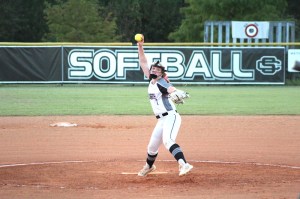 Schley County pitcher Makena Wurtz started in the circle for the Lady Wildcats in Game 2. She pitched a little over three innings, giving up no runs on one hit and striking out two.
Photo by Sheila DeVane 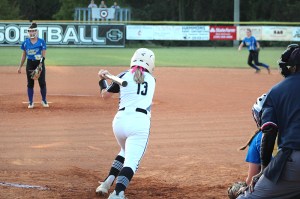 Schley County’s JoDee Howard drove in a run on a fielder’s choice and scored two more to help lead the Lady Wildcats to a 13-0 shutout win over Washington-Wilkes in Game 2 of the GHSA Class A-Public State Playoffs.
Photo by Sheila DeVane

With the two-game sweep of the Lady Tigers, SCHS improves its overall record to 14-10, while Washington-Wilkes ends its season with a record of 6-22. 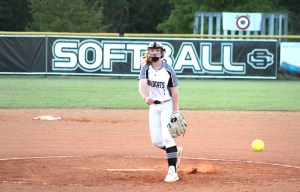 Schley County pitcher Lizzie Barineau pitched one inning in Game 2 and gave up no runs, hits or walks.
Photo by Sheila DeVane

The Lady Wildcats will host the winner of the series between Georgia Military College and Mt. Zion High School on Friday, October 23. The time for the start of Game 1 is still to be determined. Should a third game in this series be necessary, that game will played on Saturday, October 24.