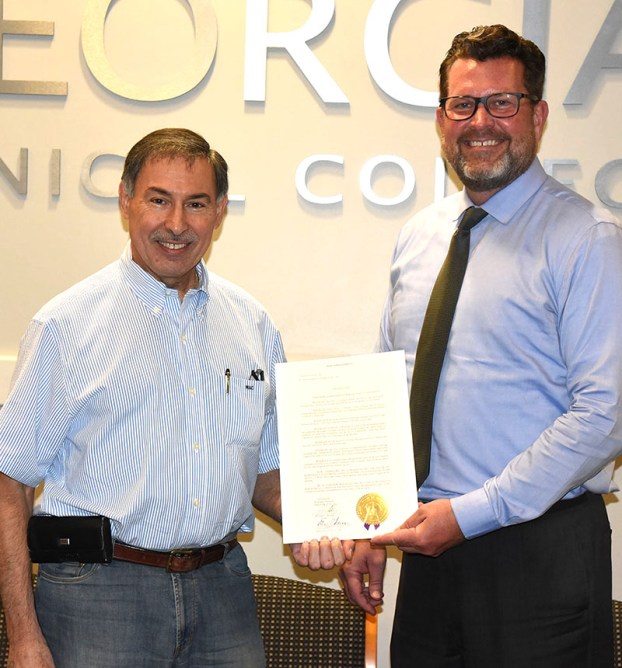 Donna Davis, wife of Rick Davis, and their nephew, Trent Davis, accepted the framed resolution from SGTC President Dr. John Watford, who recently expressed his appreciation to the Davis family and to Cheokas for honoring Rick Davis.

Davis had been an instructor at SGTC for 33 years when he retired from teaching in April of 2018.  He was a SGTC graduate of the Diesel Mechanics program in 1978.  He was hired as a full-time instructor for the Diesel program in 1981 and worked there until 1991.  He left in 1991 as part of a reduction in force.

“Rick Davis was a very special individual,” said SGTC President Dr. John Watford.  “He was an integral part of a tremendous legacy of outstanding diesel equipment students and instructors here at South Georgia Tech.  He was a mentor to so many people at South Georgia Technical College and he shared freely with others his outstanding work ethics, knowledge, integrity, and wisdom.  We are honored that Representative Cheokas introduced this resolution to honor his life and memory.  I am sure that his family is as well.” 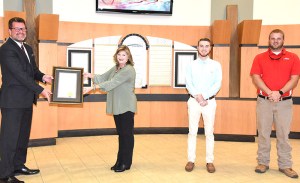 House Resolution 1400 highlighted Davis’ career at SGTC, as well as his “magnanimous strengths with an unimpeachable reputation for integrity, intelligence, fairness, and kindness, and by the example he made of his life, he made this world a better place in which to live.”

The resolution also called attention to him as a “compassionate and generous man who will long be remembered for his love of family, friendship, and community, and will be missed by all who had the great fortune of knowing him.”

Davis passed away on Thursday, January 23, 2020 at his residence.  He was survived by his loving wife Donna, and other family and friends.  A celebration of life was held on February 22, 2020 at the Davis residence.

Donations to the SGTC Rick Davis Caterpillar Scholarship can be made to the South Georgia Technical College Foundation, P.O. Box 6102, Americus, GA 31709.  All donations will be acknowledged to the family.

AMERICUS – The Sumter County Board of Commissioners (BOC) held its monthly meeting on Tuesday, October 20 and, once again,... read more