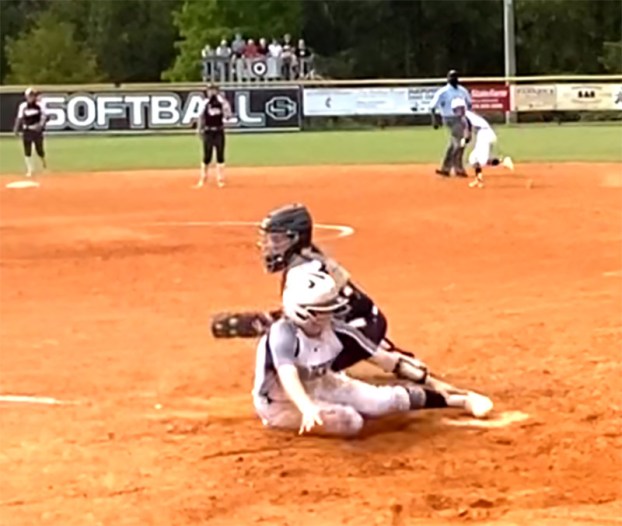 ELLAVILLE – The Schley County Lady Wildcat Softball Team (SCHS) faced a strong squad from Georgia Military College (GMC) in the second round of the Georgia High School Association (GHSA) Class A-Public State Playoffs. Both teams battled hard in two low-scoring affairs. However, thanks to a walk-off single by Perri DeVane in Game 1 and home runs by both DeVane and Landry Whaley in Game 2, the Lady Wildcats were able to sweep GMC 2-1 and 4-1 on Friday, October 23 at Schley County High School.

“That’s a quality team (GMC),” said SCHS Head Coach Jody Sellars. “I can’t speak enough to my pitchers. Our pitchers did a tremendous job getting ahead in counts, battling, and we played tremendous defense behind them. We had the big hits and the home runs, but also manufactured some runs, which is huge. If you can put them together, you can beat pretty good teams, along with solid defense and that’s what we did,” continued Sellars.

Game 1 between the Lady Wildcats and the Lady Bulldogs was pretty much a pitchers’ dual, with no runs being scored during the first four innings. However, the Lady Bulldogs broke through in the top of the fifth. With one out, Coco Rudolph drew a walk from SCHS starting pitcher Ashlyn Childs. Rudolph then stole second base and Dawn Bryan advanced her to third on a single to center field. Kyra Dobler then drove in Rudolph on a fielder’s choice to give GMC a 1-0 lead. 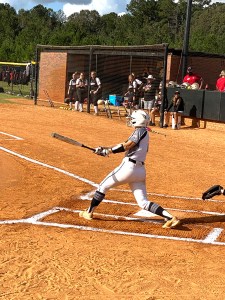 However, as they have done all year, the Lady Wildcats came up with an answer. With two outs and Darden Campbell at second base, Jade Sellars drove in Campbell on an RBI double to right field, tying the game at 1-1.

The score remained that way until the bottom of the seventh inning when the Lady Wildcats would have a chance to drive in the winning run. Maddie Walker led off the frame with a bunt single against GMC starting pitcher Lea Jannakos. After Hannah Crawford struck out for the first out, Walker was able to advance to second on a wild pitch. Jannakos then struck out Campbell for the second out. That left it up to DeVane if SCHS was to score the winning run and take Game 1. DeVane put the ball in play by hitting a grounder to GMC shortstop Makenna Talbot. Talbot threw the ball to first base, but the throw pulled the first baseman off the bag and got away. This allowed Walker to advance to third base. 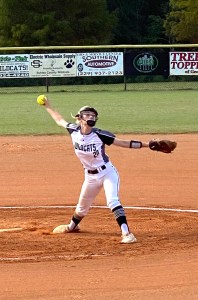 Schley County starting pitcher Makena Wurtz pitched all of Game 2 to get the win. She gave up one run on six hits against the Lady Bulldogs.
Photo by Ken Gustafson

DeVane then tried to go towards second and was caught in a run down between first and second. Seeing the run down, Walker seized the opportunity to score the winning run from third. A throw to the plate was made to get Walker, but Walker scored to give SCHS the crucial 2-1 victory in Game 1.

The Lady Wildcats got four hits in Game 1. DeVane, Campbell, Walker and Jade Sellars each got a hit and Sellars was able to drive in a run.

Childs went the whole way in the circle for the Lady Wildcats and got the win. She gave up one run on three hits, walked two and struck out two. 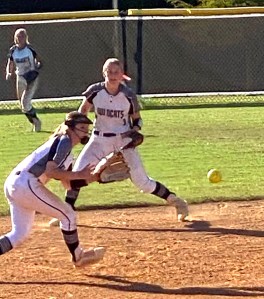 Schley County shortstop Hannah Crawford is about to make a play in Game 2 against GMC. Crawford went 2 for 2 at the plate with a run scored to help lead the Lady Wildcats to the 4-1 victory.
Photo by Ken Gustafson

Jannakos took the loss for the Lady Bulldogs. She went the whole way for GMC, giving up two runs on four hits, walking one and striking out seven.

With a victory in hand, the Lady Wildcats entered Game 2 one win away from advancing to the Elite Eight (the quarterfinals) of the state playoffs. Though Game 2 proved to be difficult, as far as offense was concerned, the Lady Wildcats were able to get the timely hitting when they needed it.

In the top of the first inning, DeVane set the tone early with a leadoff home run over the center field wall. However, the Lady Bulldogs answered in their half of the inning with the tying run. 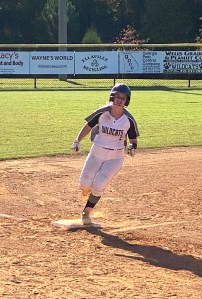 Schley County catcher Landry Whaley rounds third base and is headed for home after belting a solo home run over the left field wall in Game 2 against GMC.
Photo by Ken Gustafson

Then in the top of the third, SCHS took a 2-1 lead when DeVane drove in Hannah Crawford on an RBI single. SCHS starting pitcher Makena Wurtz was able to hold the Lady Bulldogs scoreless for the rest of the game, which gave the Lady Wildcats chances to get insurance runs.

One of those insurance runs came in the top of the sixth inning when Landry Whaley belted a solo home run over the left field wall. Then in the top of the seventh, SCHS was able to score the final run of the game when DeVane scored on a wild pitch.

In the bottom of the seventh, the Lady Bulldogs made it interesting by getting runners on first and third with two outs as a result of two SCHS errors, but Wurtz was able to get Mary Katherine Lawrence to fly out to center field to seal the 4-1 win in Game 2 and the series sweep. 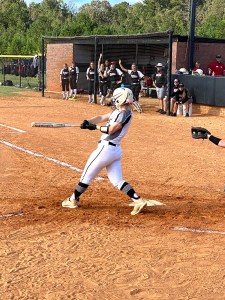 Schley County second baseman Jade Sellars went 1 for 3 with a double and an RBI in Game 1 to help lead the Lady Wildcats to a 2-1 victory over GMC.
Photo by Ken Gustafson

Wurtz went the whole way in the circle for the Lady Wildcats. She gave up one run on six hits, walked one batter and struck out none. 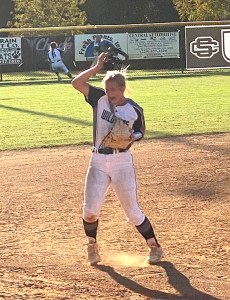 Schley County third baseman Perri DeVane pumps her fist in the air in celebration after GMC’s Mary Katherine Lawrence flew out to SCHS center fielder Darden Campbell to end Game 2 and to seal the 4-1 victory for the Lady Wildcats and a berth in the Elite Eight of the GHSA Class A-Public State Playoffs.
Photo by Ken Gustafson

The Lady Wildcats will host Bryan County in the quarterfinals of the GHSA Class A-Public State Playoffs on Tuesday, October 27.  First pitch of Game 1 is scheduled for 1:30 p.m., followed by Game 2 at 3:30 p.m.  If a deciding third game is necessary, it will be played on Wednesday, October 28 at 2 p.m.​

AMERICUS – After losing to Upson-Lee in a wild offensive shootout the week before, the Americus-Sumter Panthers (ASHS) were hoping... read more