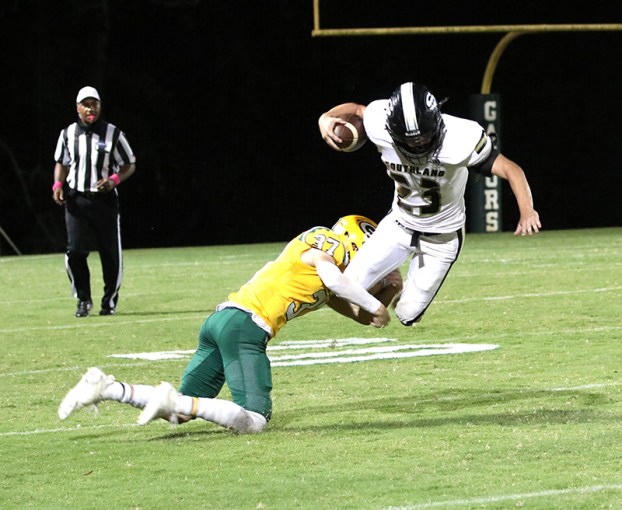 EATONTON, GA – The Southland Academy Raider Football Team (SAR) made the long journey up to Eatonton, GA on Friday, October 23 to take on the Gators of the Gatewood School (GS). It was an extremely hard-fought game, particularly on the defensive side of the ball. However, unfortunately for SAR, they came up short against the Gators, losing 16-7 at the Gatewood School in Eatonton. 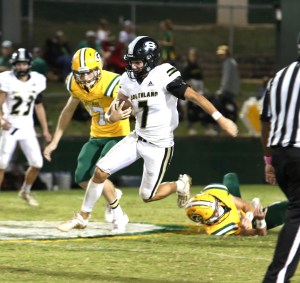 SAR running back Owen Exley runs the ball against the Gators.
Photo by Sherri Bass

In spite of the loss, SAR Head Coach Rod Murray was extremely pleased with the effort of his club. Murray told the Americus Times-Recorder that his team needs to keep grinding away and to keep working on doing the little things right and eventually, it will show on the scoreboard.

The Gators took a 7-0 lead in the first quarter when running back Bryce Johnson scored a rushing touchdown. The extra point by Jayson Burner was good and GS had an early 7-0 lead. However, the Raiders responded, as quarterback Nathan Duke led the SAR offense on a nine-play, 67-yard drive that culminated in a touchdown by Duke on a quarterback keeper. The extra point by Caleb Law was good and the score was knotted up at 7-7. The Gators regained the lead later in the first quarter on a field goal by Burner, but by halftime, the Raiders only trailed 10-7.

Late in the second half, SAR had a chance to tie the game on a field goal, but the attempt by Chase Ledger sailed wide right. The Gators took advantage of the missed field goal by mounting a drive that culminated in a touchdown by tailback Evan Bennett. The extra point was missed, but it would be enough to seal the victory for GS. 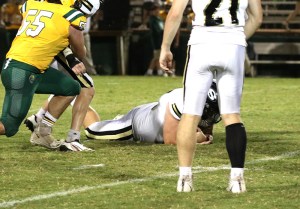 The Raiders will try to earn their first win of the season when they host Edmund Burke Academy (EBA) on Homecoming Night this Friday, October 30. This game was supposed to have been played on Friday, October 9, but was postponed until this Friday due to COVID-19 issues at EBA. Kickoff is scheduled for 7:30 p.m.