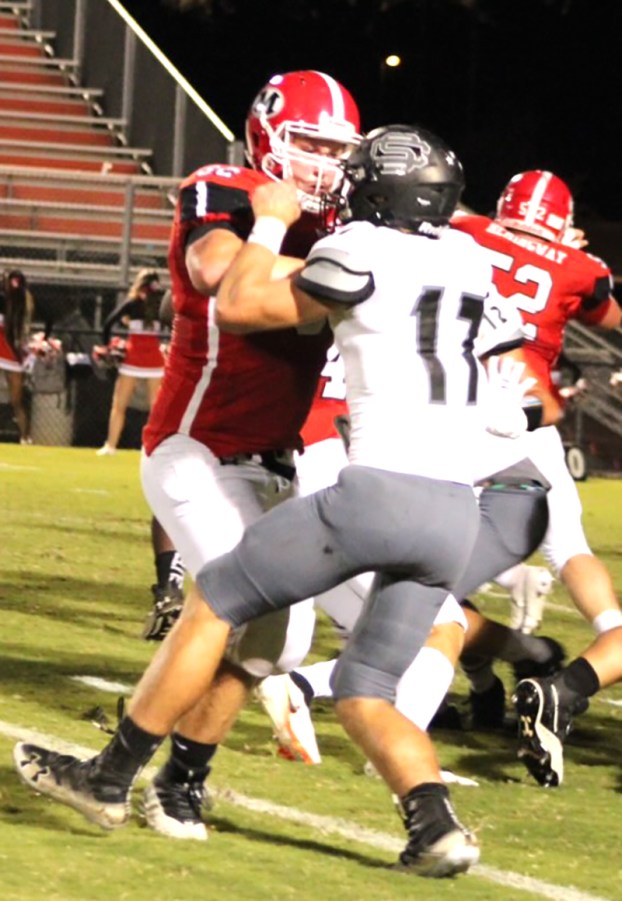 Schley County sophomore Luke Forehand (#17) is seen here making a block in a previous game. In the Wildcats’ 19-7 victory at CCA, Forehand tallied eight tackles and had one sack for a 13-yrd loss. Photo by Sheila DeVane

McDonough, GA – Before the 2020 season began, the Schley County Wildcat Football Team (SCHS) was scheduled to take on Stewart County on Friday, October 30, but due to issues with COVID-19, Stewart County had to cancel their date with the Wildcats. However, Schley County was able to fill the void by scheduling a game against Creekside Christian Academy (CCA) out of the GISA. As a result, the Wildcats made the road trip up to McDonough on Friday and defeated the Cougars 19-7 in a low-scoring affair.

The Wildcats opened the scoring in the first quarter when running back Sydney Blackwell scored from one yard out. The extra point by Aaron Pinkard was good and SCHS had an early 7-0 lead.

Then in the second quarter, the SCHS special teams made a big play by blocking a punt. Clinton Jackson picked up the ball and ran it 31 yards for a Wildcat touchdown. Pinkard’s extra point was blocked, but the Wildcats had doubled their lead to 13-0.

In the third quarter, SCHS added to its lead when Blackwell scored his second touchdown of the night. Pinkard’s extra point was no good, but the Wildcats had increased their lead to 19-0.

The Cougars were able to get on the board later in the third quarter when quarterback Brandon McNeil threw a 31-yard touchdown pass. The extra point was good, but the Wildcats were able to hold on and win 19-7.

Blackwell led the Wildcats in rushing with 39 yards on 10 carries and two touchdowns. Luke Renfroe also had a strong game on the ground for SCHS. Renfroe rushed for 21 yards on 14 carries.

On the defensive side of the ball, Zavian Solomon came up big for the Wildcats. Solomon had seven solo tackles and one assisted tackle for a total of eight tackles, including two tackles for loss. Luke Forehand also had a strong game defensively, as he amassed four solo tackles and four assisted tackles for a total of eight tackles. Forehand also came up with a sack for a loss of 13 yards and Jacob Long also had a sack on the night.

The Wildcats were able to force two turnovers in the game, as Long and Logan Elliot each came up with an interception.

With the win, SCHS improves its overall record to 4-3, while CCA suffers their first loss of the season and drops to 5-1.

The Wildcats return to region play when they travel to Cusseta, GA to take on Chattahoochee County on Friday, November 6. Kickoff is scheduled for 7:30 p.m.