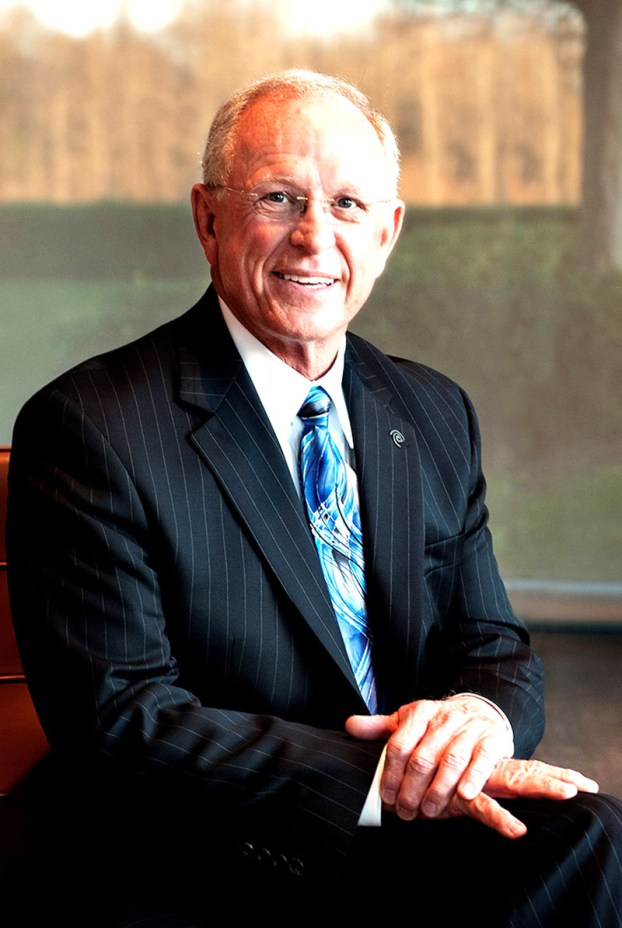 Jack Stanley, a 1967 graduate of South Georgia Tech, is a retired telecommunication executive from Time Warner Cable, who was honored as “Mr. Cable Television in North Carolina.” Photo by Su Ann Bird

AMERICUS – “Find something you like to do and go be the best you can be.” Those were the words of wisdom stated by retired Telecommunications Executive Jack W. Stanley, a 1967 graduate of South Georgia Tech’s Electronics program. That was Stanley’s response when he was asked what advice he would give to the next generation of students who choose to continue their education at SGTC.  He said that was also the advice he shared with his four children.

Stanley retired as a Telecommunications Executive after nearly 33 years with Time Warner Cable and 45 years in the industry.  At the time of his retirement, he was the Regional Vice President Government Relations, Southeast, and was responsible for the company’s state/local government affairs interest and legislative policy for North Carolina, South Carolina, Alabama, and Virginia.  He also added that “treating people fairly” was something he had always strived to do and it paid off in his life and his career.

While Stanley rose to the top of his profession, he knew what it was to start at the bottom and work his way up.  In fact, his expertise and that of many others like him led to the rise of the industry that now delivers many of the things most people consider essential such as high-speed broadband services, digital telephone services, home networking, and home security services as well as hundreds of linear video channels.  “We built an industry from the late 1960’s to the 2000’s and literally wired a nation,” said Stanley.

The honorable Howard Coble of North Carolina recognized Jack Stanley with a salute in the Congressional Record for the House of Representatives in 2012 and honored Jack W. Stanley with the title of “Mr. Cable Television in North Carolina.”  Stanley also received the Order of the Long Leaf Pine award by North Carolina Governor Bev Purdue in November of 2012.  This is the highest honor given by North Carolina’s governors to persons who have made significant contributions to the state and their communities through their exemplary service and exceptional accomplishments.

Representative Coble’s remarks in the Congressional Record began, “Mr. Speaker, on behalf of the citizens of the Sixth District of North Carolina, I take this occasion to honor Jack W. Stanley – a great personal friend for many years – as he retires from 45 years of service in the cable television industry.  Jack has been a true pioneer in the industry, helping to lead its growth from a service designed merely to extend over-the-air-broadcast signals into hard to reach areas to what it is today – an industry that makes available to homes across the nation hundreds of linear video channels, on-demand programming, high-speed broadband services, digital telephone services, home networking and home security services.  It is an industry that is driven by innovation and private investment.  And Jack has seen it all and helped make it happen.” 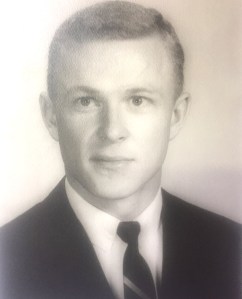 Jack Stanley as a 1967 student at South Georgia Tech.
Submitted PhotoThe road to Jack Stanley’s success had humble beginnings in rural Georgia.  He grew up in Chauncey, Georgia, outside of Eastman.  He was the son of a farmer.  As a young boy, he lived with his grandmother for 10 years, because she was frightened to live alone.  He grew up in modest circumstances on his family’s farm and learned the lessons of hard work and respect for others that he carried throughout his career.  He said it was in those early years as a young boy walking a dirt road alone at night to his grandmother’s house where he faced and conquered fear.

Stanley began working part-time at a radio/TV repair shop in Eastman while he was in high school and “had an interest in things that were technical in nature, like electronics.”  After graduation, a first cousin from Abbeville attending South Georgia Tech and his cousin’s dad talked with Jack’s father about allowing him to go there too.  Jack and his father came to South Georgia Tech in August of 1965 for a visit and met with Dean of Students Harrold Moore.  The rest is history.  Jack Stanley started classes in September of 1965 and fell in love with electronics.

“I owe everything I learned which launched my career into a good place to the instructors at South Georgia Tech,” said Stanley.  Ralph Thomas was one of the instructors Stanley mentioned he “thought a lot of.”  He also recalled James W. Geeslin, Electronic Technology instructor, who Stanley described as an “absolutely brilliant man,” and Walter Doege, who taught the technical math like algebra and trigonometry.

Stanley also spotlighted J.A. McLean, who taught Electrical Technology.  He said “that man made a tremendous difference” in his life.  “Mr. McLean taught physics and AC & DC classes.  In March of 1966, a bad storm was passing through Americus and our instructors told the ones of us crossing the Flint River in Montezuma we could leave early to go home due to concern over flooding.  Water Reid, Otis Kelly, and I were all riding together going back home to Eastman for the weekend when we had an accident near the river bridge in Montezuma.  I was the only one injured and as a consequence missed two weeks of class.  Mr. McLean told me I had missed too much class causing me to fall far behind and I couldn’t come back to finish up the quarter.

“I begged him to let me come back to school which was one week before the final quarter exam and if I passed the exam to give me credit for the class.  He told me there was no way I could pass, as I had missed far too much, but he finally gave in.  I made an ‘A’ on the exam and he passed me.  If he hadn’t given me that opportunity it could have cost me the chance to graduate because I probably wouldn’t have come back,” said Stanley.

The training and education that Stanley received at South Georgia Tech has stood the test of time.  Stanley’s first job after completing his studies at South Georgia Tech was at the U.S. Naval Space Surveillance System in Hawkinsville.  His job was to track satellites for the Navy and in 1967 they were tracking approximately 2400 objects every 24 hours.  Some of those objects were satellites and some were just space junk.  “Today it probably looks like a grave yard or junk yard up there,” laughed Stanley.

“I absolutely loved that job.  It didn’t pay a lot but the receiver station in Hawkinsville was one of the newest stations with state of the art technology. I was so well prepared for the job; I was promoted to supervisor after six months.”  From there, Stanley continued to rise.  In March 1968 he entered the cable television industry in a variety of operational roles, including successfully leading cable systems in Georgia, Texas and North Carolina.  He served as Division President of Time Warner Cable’s Greensboro Division, where he managed a staff of some 700 employees and more than 200 contract personnel.  Under his leadership the Division was top-ranked in customer satisfaction and consistently exceeded the established business metrics.

Stanley was known among his peers “as an innovative leader who is committed to exceptional customer services and who has the ability to forge positive relationships with consumers, employees and public officials.”  He developed the first set of service standards for Time Warner Cable, which quickly became the basis for national industry standards.  This commitment to customer service was recognized with a Chairman’s Award and the National Public Affairs Award of the Maryland and Delaware Cable Association.

Stanley served four separate terms as President of the North Carolina Cable Telecommunications Association.  He was also instrumental in establishing a college scholarship program to help provide higher education opportunities for children of members of the cable industry.  Providing opportunities for others has always been a driving focus of Jack’s career.

“Probably the thing I enjoyed most in my job as a Division President for Time Warner was the opportunity that I had to open doors for others,” explained Stanley.  “I absolutely loved being able to give others the opportunity to grow and succeed.  Making a difference in someone’s life is the best thing you can do.”

With all of his success in life, professionally and personally, Stanley still looks back fondly on his years at South Georgia Tech.  “I still have my 1967 yearbook.  We were the Technics then and I believe the Jets today.  As I leafed through the yearbook recently, it brought back memories of the students I came to know and reflect on what their stories might be,” said Stanley.  “Tragically, I know the story of my closest friends, Phil Coleman and Mike Beck.  Mike was my roommate, and Phil was a longtime friend and classmate.  Both passed away at young ages.”

Stanly remembers his time spent in the dorm at South Georgia Tech, which at the time was one of the army barracks from the time the college was an air training base.  “When I came down in 1965, they didn’t have enough room in the dorms for everyone, so I lived in an old military building that was wide open with rows and rows of double-decker cots.  There was only one large bathroom for all those young men.  Here I was a young county boy right off the farm now living with 50 people I had never met in my life.  I am a pretty resilient person and I always remembered walking those lonely dark dirt roads and though if I can handle that, I can handle this,” laughed Stanley.

That type of resiliency and determination led Stanley, who was already extremely successful in his career, to contact South Georgia Technical College in 2006 to see about upgrading his electronics diploma to an associate’s degree.  He took online classes from his alma mater from 2006 to 2008 nearly 40 years after he first attended South Georgia Tech just to see if he could.  He finished with a 3.98 GPA.

Today, he is thankful for the tough moments in his life and his career.  “I always enjoyed and thrived on going places in need of operational improvements. Much of my career was spent in operational improvements. To stay in business, you must be creative and constantly looking for ways to improve,” explained Stanley.  That is also good advice for young people today.  “If we do our jobs well, we not only prevent problems from occurring but makes for a more professionally run operation.”

Stanley currently lives in Summerfield, NC, but maintains and manages his home place in Dodge County, which is now named Pine Barrens Plantation, LLC.    This is an enterprise dedicated to principled stewardship, sound conservation practices and preservation of native longleaf forest habitat in its historic range in Georgia.

Even though he has retired, Stanley still has a passion for “things technical in nature.”  He also has a passion for history and realizes that his most important accomplishment is his family, which includes four children and 12 grandchildren.  North Carolina Congressman Howard Coble summed up Jack Stanley and his impact on the career he chose with this statement, “the depth of his experience and knowledge about the cable industry is matched by the depth of his character and judgement. When you shake hands in agreement with Jack Stanley, you do not have to wonder whether you have a deal.  A modest man, who came from modest means, he doesn’t seek attention – but he deserves it.  Jack is a true Southern gentleman in the best sense of that term.”