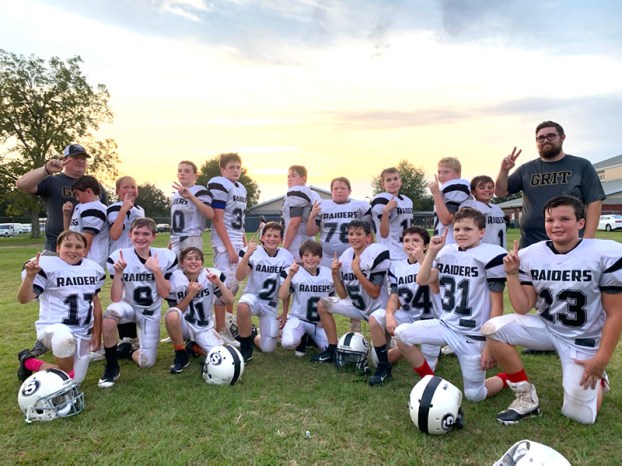 VALDOSTA – The Southland Academy Junior Pro (Fifth & Sixth Grade) football team came from behind to defeat the Brookwood Junior Pro team 18-14 to win their second straight Region 3-AAA Championship. The game was played on Wednesday, October 28, at the Valwood School in Valdosta.

The JR Pro game was a rematch of a previous game between the Southland Raiders (SAR) and Brookwood Warriors (BKW). The previous game was a very tightly contested game and a high-scoring affair, as well with SAR winning in the first match by a score of 28-20. The game ended with SAR making a defensive stand. In the championship game, BKW got off to a fast start and raced to a 14-0 lead on long touchdown runs by their talented tail back.

The Raiders we’re finally able to mount a scoring, but with just three seconds left in the first half, the Raiders failed on the two-point conversion attempt and the Warriors led at halftime 14-6. SAR received the ball to begin the second half and they were able to move the ball down the field behind hard running from their running backs. SAR was able to score again, but again failed to convert the two-point attempt, keeping the Warriors in front by the score of 14-12.

BKW started its next drive from the 30-yard line. However, the Warriors fumbled the snap into the end zone and the ball was recovered by SAR for a touchdown. This gave the Raiders a 18-14 lead; a lead that they would not relinquish.

With 4.7 seconds left in the game, BKW went for it on fourth and goal from the 15- yard line. The Warriors ran a halfback pass, but the ball bounced in and out of the hands of the BKW receiver, ending the game.

AMERICUS – In spite of the difficult situation with the COVID-19 virus, The Southland Academy Girls’ Softball Team was still... read more