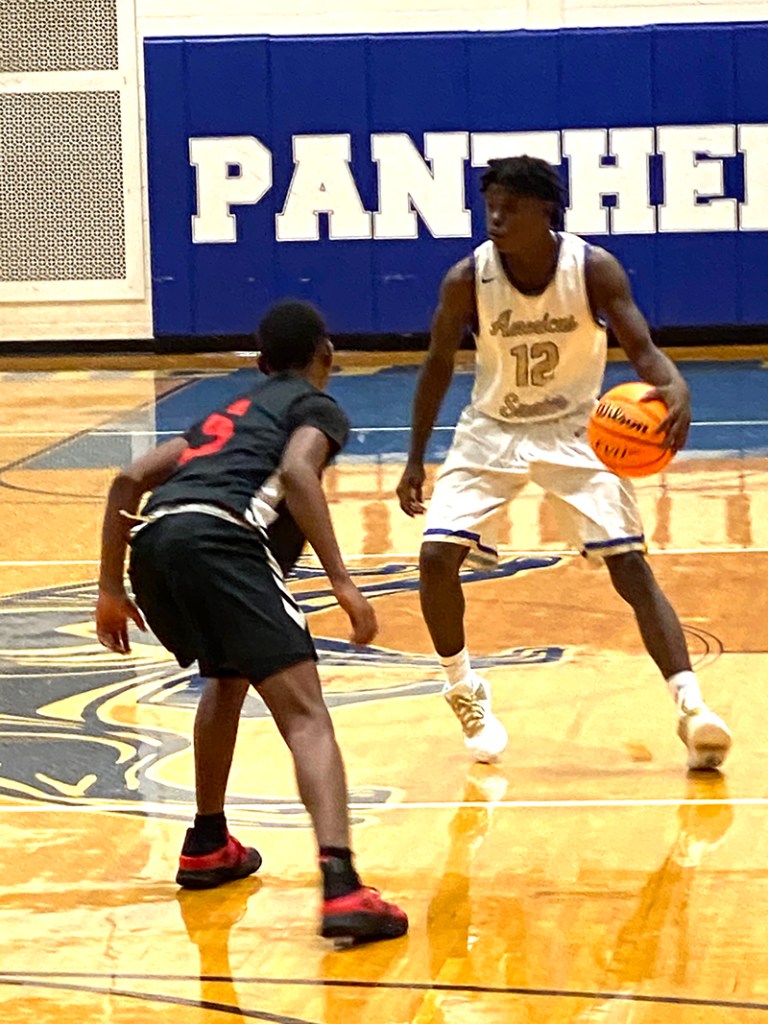 Americus-Sumter guard TaQuan Robinson (#12) scored eight points for the Panthers in their 51-47 loss to Lee County. Photo by Ken Gustafson

AMERICUS – It has been eight months since the Americus-Sumter High School boys’ basketball team lost their only game of the 2019-2020 season; a 73-70 double-overtime loss to St. Pius X in the quarterfinals of the GHSA Class AAAA State Playoffs. For the 2019-2020 Panthers (29-1), it was their only blemish of the season, but sadly, it would be their last. However, coming into the 2020-2021 season, the Panthers, like every other high school sports team in the country, have had to deal with the challenges and difficulties brought on by the COVID-19 Virus. On Saturday, November 28, the Panthers were hoping to kick off the new season with a win at home against Lee County, but turnovers, particularly down the stretch, proved costly and led to a 51-47 loss to the Trojans.

“First of all, we were not aggressive. Lee County came out. They were a good team…a very disciplined team. They were very aggressive with the guard play,” said ASHS Head Coach Johnny Genwright. “We had a lot of turnovers. We had a lot of turnovers down the stretch when we needed to execute plays, but we’re still working. We’ve got to get back to practice and start working harder. My guards are young, but they’ve got to get more aggressive. We’ve got to go back to playing Americus-Sumter basketball and being more aggressive.” 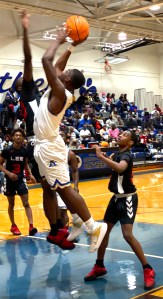 Keldrick Flemming led the Panthers in scoring with 15 points and both Jordan Wiley and TyQuan Robinson each scored eight points. Brandon Pope also chipped in six points in the losing cause. 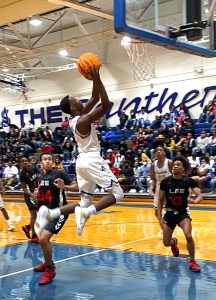 It was a back-and-forth affair during the first few minutes of the game, but the Trojans were able to jump out to an 11-6 lead. However, the Panthers scored six unanswered points, capped off with a basket from Kyric Daivs, to take a 12-11 lead by the end of the first quarter.

ASHS extended its lead to 16-11 when Wiley scored the first four points of the second quarter. That was the beginning of a 7-3 run by the Panthers, which gave them a 23-14 lead with a little over three minutes left before the half. During this period of the game, the Panthers were able to use their high-pressure defense to force turnovers and they created points off those turnovers. 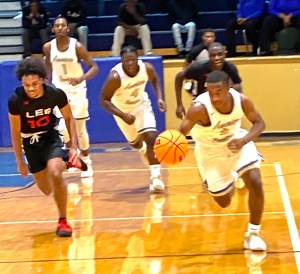 However, the Trojans managed to go on a 5-0 run of their own near the end of the half. Jordan Moser capped off that run with a three-pointer. Then with 28.7 seconds left before halftime, Pope fouled LCHS guard M.J. Taylor as he was attempting a three-point shot. Taylor made two of the three free throws to bring the Trojans to within two at 23-21. Then with about two seconds left before halftime, the Trojans tied the game when Taylor stole the ball and scored on a layup, completing a 9-0 run by LCHS and tying the game at 23-23 at the half.

During the first four minutes of the third quarter, both teams traded baskets, with LCHS owning a 30-29 lead. However, Robinson was able to put ASHS back in front on a short jumper with 3:30 to go in the quarter. Both teams continued to trade baskets for the remainder of the quarter, but by the quarter’s end, the score was tied at 35-35, setting up what would be an exciting back and-forth final quarter to decide the game. 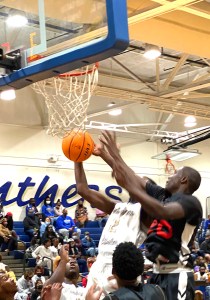 Kyric Davis (#2) goes up for a put back against Lee County.
Photo by Ken Gustafson

In the first minute of the fourth quarter, the Trojans went on a 5-0 run, capped off by a three-pointer by Moser. That prompted a timeout by Genwright with a little less than seven minutes to play.

However, the Panthers outscored LCHS 6-5 over the next minute and then tied the game at 43-43 on a short jumper by Darion Mitchell with 3:50 to go. This prompted LCHS Head Coach Kirven Davis to call a time out. 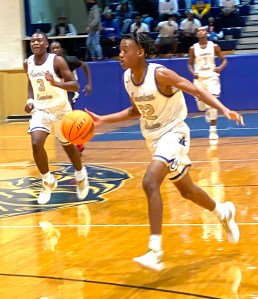 With 48.3 seconds to go, the Trojans had a 48-47 lead and the ball, but they nearly turned the ball over on the inbounds pass. However, the Trojans were still able to score to take a 50-47 lead, prompting Genwright to call a timeout with 21.7 seconds left.

Out of the timeout, the Panthers tried to get the tying basket, but the Trojans forced a turnover and Taylor was fouled with 9.6 seconds left. Taylor sank one of two free throws to seal the 51-47 victory for LCHS.

Taylor led all scorers with 27 points and Moser chipped in nine points for the Trojans in the winning cause.

The Panthers (0-1) will get an introduction to their first Region 2-AAA opponent, Central (Macon), on Tuesday, December 1, in the Panther Den. The Chargers lost their season opener on Saturday to Houston County 67-38.