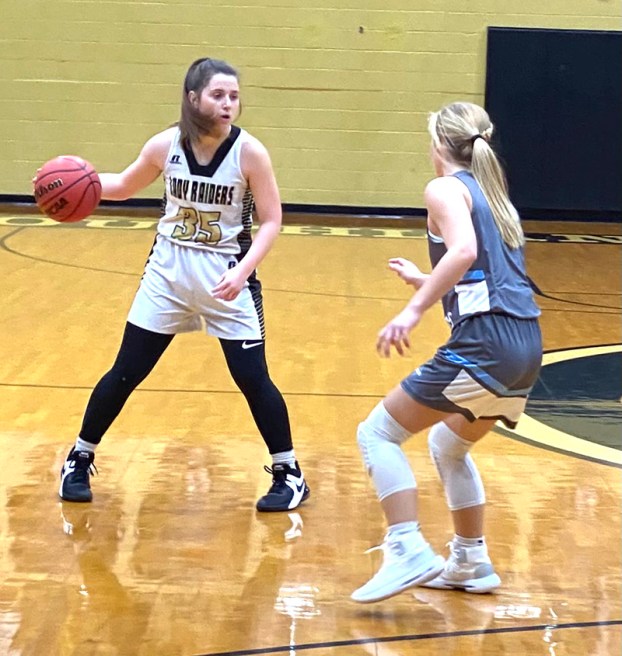 Southland Academy sophomore point guard Riley Mitchell (35) scored 16 points to lead the Lady Raiders to a 43-27 victory at Brookwood this past Friday in Thomasville. ATR Archive

Lady Raiders use first quarter explosion to put away SGA

AMERICUS – As Southland Academy Girls’ Head Basketball Coach Ty Kinslow has said many times before, it starts with defense. On Monday, December 7, there was no exception to that mantra. During the first quarter of SAR’s game against Southwest Georgia Academy (SGA), the Lady Raiders used their trademark full-court press to force turnovers and score transition baskets. By the end of the first quarter, SAR had built a 25-8 lead and they controlled the rest of the game en route to a 60-37 win over the Lady Warriors at Melvin Kinslow Gymnasium.

While their defensive pressure in the first quarter was a major factor in the win, the Lady Raiders’ strong shooting in this game was another factor that contributed to their victory as well.

“We really shot the ball well. A lot of times when you shot the ball well, it makes it feel like you’re really playing well,” said Kinslow. “Actually, defensive wise, it wasn’t our typical defensive game. We gave up way too many baskets and we let them take it to the basket.” In spite of his club’s occasional defensive lapses during the game, Kinslow was still extremely proud of his team’s overall performance, in particular, the Lady Raiders’ shooting.

“Our shooting came around. When you shoot good, it makes you look like you’re really playing good. We did a lot of good things, but there are a lot of things we still need to work on,” said Kinslow. 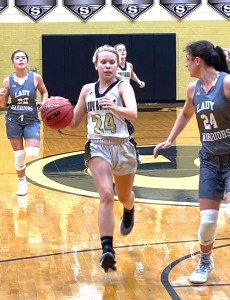 Southland Academy senior guard Maddie Crisp drives the ball to the basket against SGA. Crisp scored eight points in the win over the Lady Warriors.
Photo by Ken Gustafson

The Lady Raiders had four players score in double figures. Haleigh Warren led SAR in scoring with 15 points and Holly McCain poured in 14. Riley Mitchell scored 11 points and Morgan Weaver chipped in 10 points in the winning cause.

The Lady Raiders quickly jumped out to a 13-2 lead in the first quarter on the strength of their full-court press and the shooting of Warren, Mitchell and Maddie Crisp. All three players hit a three-pointer during this run to help give SAR the big, early lead. The Lady Raiders continued to use their full-court press to force SGA into committing turnovers. In turn, the Lady Raiders scored several transition layups off those turnovers, so much so that SAR had a 25-8 lead by the end of the first quarter. The onslaught lightened up somewhat in the second quarter, but by halftime, the Lady Raiders had a 35-15 lead. 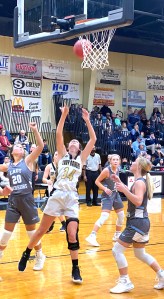 Southland Academy senior guard Haleigh Warren scores a layup against SGA. Warren led the Lady Raiders in scoring with 14 points in their win over the Lady Warriors.
Photo by Ken Gustafson

During the first three minutes of the third quarter, the scoring was evenly matched, with SAR leading 40-20. However, with a little less than three minutes left in the third quarter, SGA’s Caroline Kirkland nailed a three-pointer to cut SAR’s lead to 16 at 42-26. The Lady Raiders responded as Warren knocked down another three-pointer to put SAR back up by 19, but the Lady Warriors did not allow their deficit to get much worse. By the start of the final stanza, SAR maintained a 48-28 lead.

With seven minutes left in the game, SGA implemented a full-court press, but the Lady Raiders were able to break that press and got a layup from Weaver, making the score 53-31 SAR. 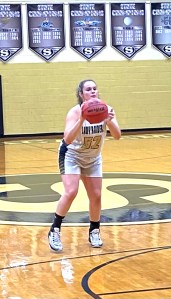 Southland Academy senior forward Holly McCain is about to drill a jumper. McCain scored 14 points in the win over SGA.
Photo by Ken Gustafson

SGA continued to press the Lady Raiders full court, but SAR was able to break the press and for the most part, took care of the basketball down the stretch. The Lady Warriors were not able to make a serious run during the remainder of the game and SAR went on to win 60-37.

Raiders dominate from start to finish in rout of SGA

AMERICUS – From the beginning of the contest to the end of it, there was actually no contest. On the... read more