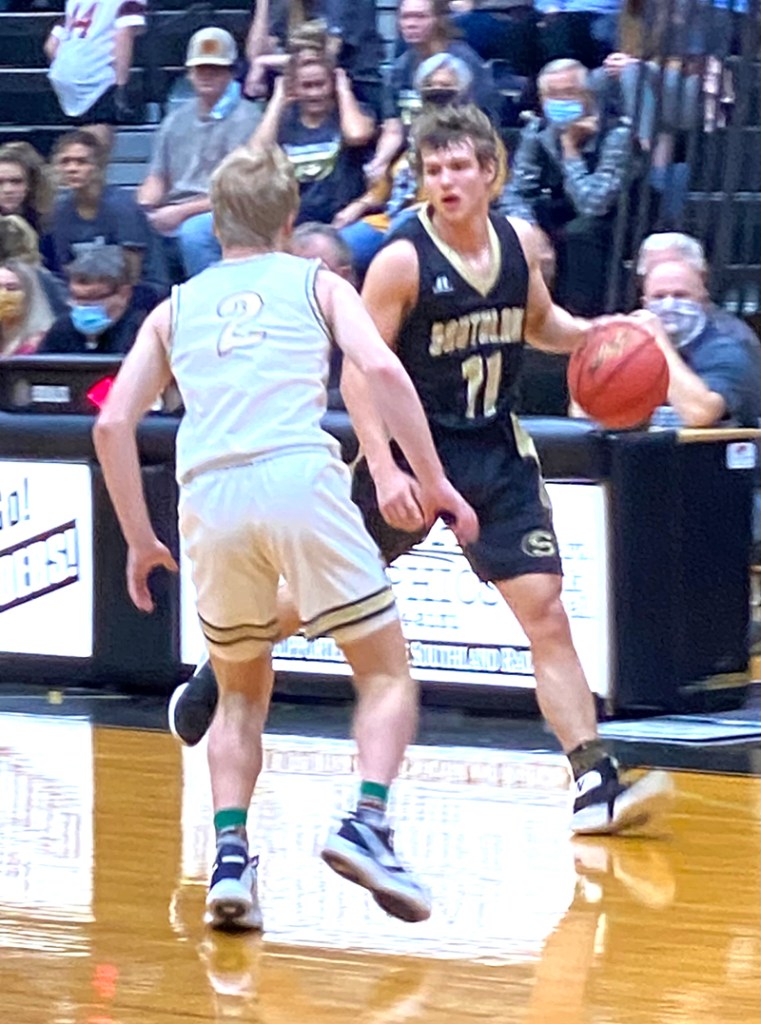 AMERICUS – Southland Academy (SAR) senior guard Max Foster put on a tremendous shooting performance against John Milledge Academy (JMA) by draining eight three-pointers against the Trojans. However, it would not be enough.

JMA had a rebounding advantage on the inside and three Trojan players scored in double figures to help lead the boys from Milledgeville to a 54-51 victory over the Raiders on Monday afternoon, December 21, at the Melvin Kinslow Gymnasium on the Southland campus.

Foster led all scorers with 28 points, with 24 of them coming from his eight made shots from beyond the arc.

In spite of the loss, SAR Head Coach Rundy Foster was pleased overall with his team’s effort against a solid JMA squad, but was disappointed with his club’s defensive play on the low post. “I didn’t think we did a good job of playing low-post defense and unfortunately, we didn’t do a good job of blocking out,” said Foster. “We had to block out to have a chance to win and we just didn’t do it, but, with that being said, I’m very pleased with the outcome, with the way we worked, with the way we never gave up. I think we’ve got a good team. I just think we need to do a few more things to make ourselves a little more successful on the scoreboard.” 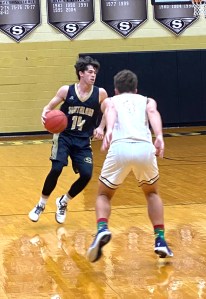 Southland Academy senior guard Nathan Duke (#14) runs the offense for the Raiders. Duke scored eight points in the loss to the Trojans.
Photo by Ken Gustafson

This game was originally scheduled to be played at the Brookwood School in Thomasville as part of the Brookwood Holiday Invitational, but due to COVID-19, the tournament was canceled and it was decided that JMA would play the Raiders at Southland Academy. JMA will head down to Thomasville on Tuesday, December 22, to play Brookwood later that day. 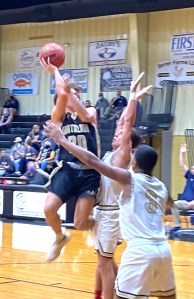 Southland Academy senior guard Owen Exley (#20) goes up to score against JMA. Exley scored four points in the loss to the Trojans.
Photo by Ken Gustafson

With a little less than two minutes left before halftime, Foster was able to end SAR’s scoring draught with another three-pointer, but the Trojans went on another run, scoring seven unanswered points before Exley scored to cut the JMA lead to two at 24-22. Then with just seconds left before halftime, the Raiders got a steal and a basket from Volley to tie the game at 24-24 at the half.

SAR struggled out of the gate in the third quarter, while the Trojans went on an 8-2 run to take a 32-26 lead. During this period of the game, SAR struggled to score in the half court, while the Trojans continued to find ways to score against the Raiders’ half-court defense. Then with 10 seconds left in the quarter, JMA guard Grayson Aldridge drilled a three-pointer and the Raiders found themselves trailing 41-32 with one more quarter to play.

SAR got off to a good start to begin the final quarter when Foster drilled another three-pointer. Then about a minute later, Foster drilled another shot behind the arc to bring the Raiders to within three at 41-38. However, JMA scored four unanswered points to push its lead back up to seven at 45-38. This prompted Coach Foster to call a timeout to get his team to regroup.

Both teams traded baskets over the next few minutes, but Max Foster was able to knock down another one of his three-pointers to keep SAR within striking distance. Then with 1:18 to play in the game, Foster drilled another three-pointer to bring the Raiders to within two at 51-49. Just like that, Foster had almost single-handedly put the Raiders in a position to pull off a victory. 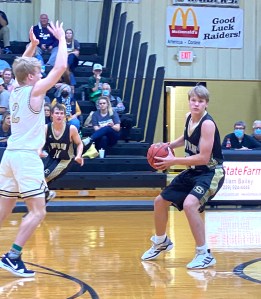 With a minute left, the Raiders turned up their defensive pressure on the Trojans, forcing JMA to call a timeout. Out of the timeout, the Trojans moved the ball around the perimeter to try and run some clock. Then with about 20 seconds left, JMA was able to score a basket on the inside to take a 53-49 lead. The Raiders made a last-ditch effort for a come-from behind victory in the closing seconds, but it was too little, too late.

With the loss, the Raiders fall to 3-1 on the season, while JMA improves to 3-0.

After the Christmas Break, the Raiders will hit the hardwood once again, this time in Phenix City, AL, where they will compete in the annual Border Wars Tournament at the Glenwood School. Their first game of the tournament will be against Glenwood on Tuesday, December 29, at 5:30 p.m. EST.