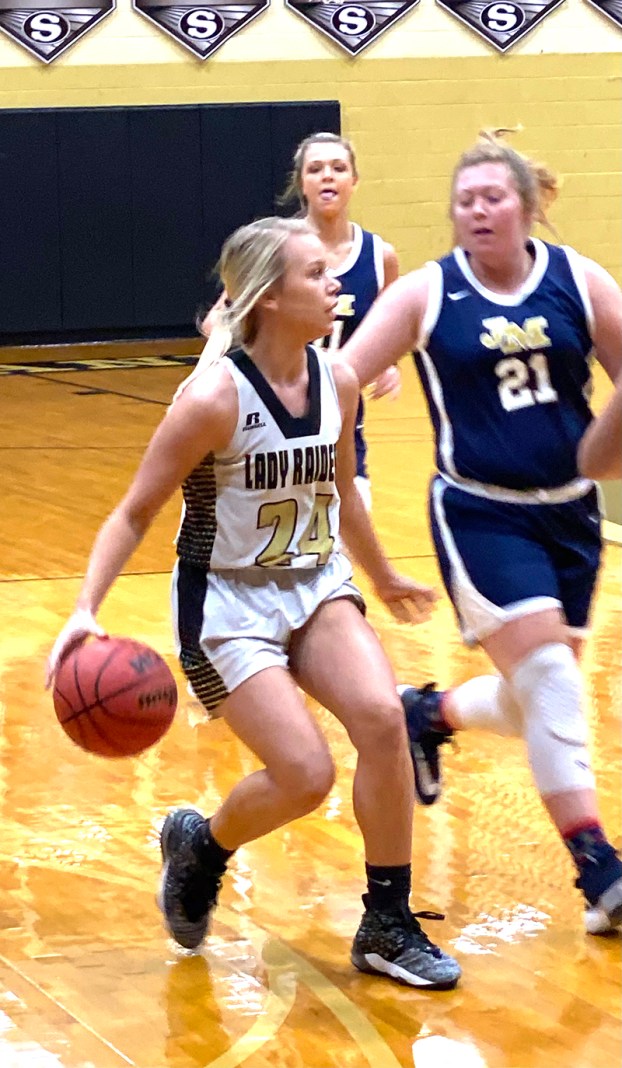 AMERICUS – It was a low-scoring, defensive struggle from start to finish between the Southland Academy Lady Raiders (SAR) and the John Milledge Academy (JMA) Lady Trojans, but as it has always been with SAR Head Coach Ty Kinslow’s clubs, it starts with defense. On this particular day, it ended with defense as well, as the Lady Raiders held JMA to just three points in the fourth quarter and secured a hard-fought 35-27 victory over the Lady Trojans on Monday afternoon, December 21, at the Melvin Kinslow Gymnasium on the Southland campus.

“We played really great defense during the first quarter,” said Kinslow. “Then in the second quarter, they got some stuff going with their high-low offense and got a couple of girls open. At halftime, we emphasized to our girls the importance of pressuring the ball. The girls really pressured the ball hard in the second half and made it hard for them (JMA) to get the entry pass in. That team went to the Final Four last year and they had four returning starters. For us to beat a team like that was a really good win. I’m very proud of the girls.”

Southland Academy senior forward Holly McCain goes up to try to score against JMA. McCain scored eight points in the win over the Lady Trojans.
Photo by Ken Gustafson

By the end of the first quarter, the Lady Raiders had an 11-5 lead, but JMA outscored SAR 13-6 in the second quarter and took an 18-17 lead with a little over a minute left in the first half. Both teams traded baskets the rest of the way, but JMA had a 20-19 halftime lead.

With a little over six minutes to go in the third quarter, JMA had a 22-21 lead until Crisp generated a steal and scored on a fast-break layup. Both teams went scoreless over the next four minutes until Morgan Weaver hit two free throws to give SAR a 25-22 lead with 1:49 left, but JMA was able to get a basket with about 10 seconds left to cut the Lady Raiders’ lead to 25-24 with one more quarter to play.

Early in the fourth quarter, SAR extended its lead to 28-24 on a three-pointer by Warren. During this period of the game, the Lady Raiders used their tenacious half-court defense to cause problems for JMA’s offense. 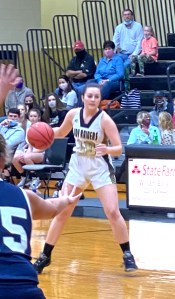 While SAR’s defense was solid, they too struggled on offense to score against the tough man-to-man defense of JMA in the fourth quarter. In spite of their struggles to score, the Lady Raiders continued to limit JMA’s opportunities to score and hung on for a 35-27 victory.

With the win, the Lady Raiders improve to 5-1 on the season, while JMA drops to 5-2. Olivia Rhodes led the Lady Trojans with 10 points in the losing cause.

Up next for the Lady Raiders is a trip to Phenix City, AL for the Annual Border Wars Tournament at the Glenwood School. SAR’s first game of the tournament is against Glenwood and is scheduled to take place on Tuesday, December 29, at 4 p.m. EST.