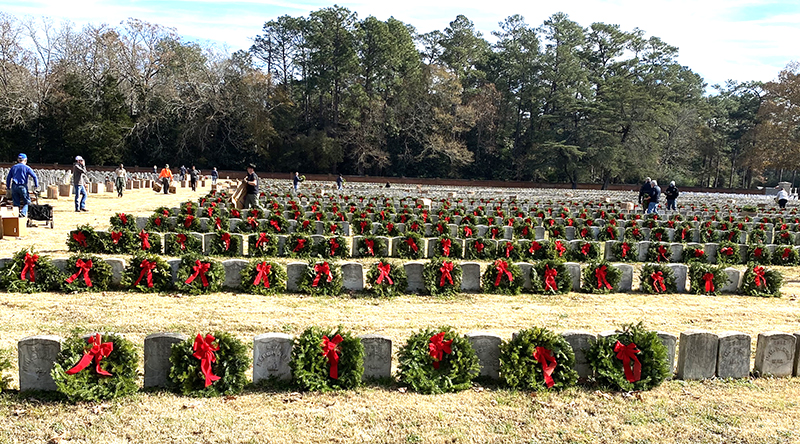 Wreathes Across America, an organization dedicated to honoring all deceased veterans, came to Andersonville National Cemetery on Saturday, December 19 and dispensed close to 11,000 wreathes to volunteers. For several hours on Saturday, these volunteers went throughout the cemetery and placed wreathes on the tombstones to honor these veterans. Photo by Ken Gustafson

ANDERSONVILLE – It is something that is done every year at this special time. It is something that is done to pay the utmost honor to those who have served our country and paid the ultimate sacrifice. It is the annual Wreathes Across America Day. On Saturday, December 19, Wreathes Across America (WAA), a 501C3 organization that was formed as a national effort to place wreathes on the graves of soldiers at Arlington National Cemetery, did that very same thing at all participating national cemeteries across the nation. They came to Andersonville National Cemetery on Saturday for the purpose of laying wreathes at the graves of all soldiers from the Civil War to the present. Many of these soldiers gave, as President Abraham Lincoln said in his Gettysburg Address, ‘their last measure of devotion.’

This is the WAA’s 29th year of traveling down the East Coast from Columbia Falls, ME and they laid wreathes at 2,557 participating national cemeteries across the nation, including Andersonville. 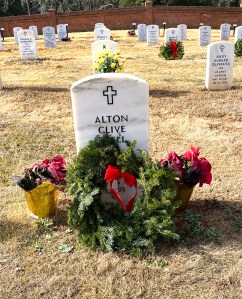 This is the grave of Alton C. Shell, a US Army Veteran (PFC) and legendary football coach at Americus High School from 1971-1991. From 1973-1976, Coach Shell led the Panthers on a 33-game winning streak, the 12th longest in Georgia history and guided AHS to back-to-back state titles in 1974 and 1975.
Photo by Ken Gustafson

The Americus Rotary Club, in conjunction with the WAA, takes part in the wreathe-laying observance every year at Andersonville. “It’s kind of a multi-tier thing,” said Rotarian Jim Covington. “Rotary is obviously local. They help support the Friends of Andersonville. I’m also a member of that.”

According to its website; www.friendsofandersonville.org, the organization was established in 1988 to provide support to the Andersonville National Historic Site and works closely with the park’s staff to foster public understanding of the role the prison camp played in the nation’s history. 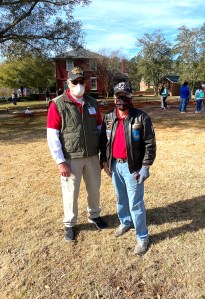 Rotarians Jim Covington (left) and Bill Arcuri (right) were at Andersonville National Cemetery to take part in the annual wreathe-laying event at the cemetery put on by Wreathes Across America (WAA). The local Americus Rotary Club works with WAA every year to help make the event happen.
Photo by Ken Gustafson

For Covington, being able to participate in this endeavor every year is a special privilege and one that he doesn’t take lightly. “It’s an honor. It’s a privilege. It’s service,” said Covington. “Of course, you know, the motto of the Rotary Club is Service Above Self, so it fits right in very closely. This is a great national historic site. I like to call it the trifecta of historic sites because it has the ex-POW Museum. It’s got the campsite, Camp Sumter, and it has the cemetery. Anyone of those three, standing alone, would be enough to be an historic site. We’ve got all three of them right here in one spot.” Covington went on to say that he is proud of the fact that there are two national historic sites; the Jimmy Carter National Historic site and the Andersonville National Historic Site. “You don’t find that at any other place except Washington, D.C.,” said Covington.

Due to the COVID-19 virus, things had to be done differently this year. In previous years, a crowd of people would gather at the cemetery for a wreathe-laying ceremony that would take place at noon. That is something that is done at every WAA wreathe-laying ceremony at national cemeteries across the country, but due to COVID-19, the program that was supposed to have taken place on Saturday had to be canceled.

Instead of having the ceremony, volunteers had to register to come into the cemetery at different times to individually lay wreathes on all of the tombstones.

“We’ve participated in Wreathes Across America for a number of years now,” said Jody Mays, Chief of Interpretation and Resource Management for the Andersonville National Historic Site. “This year’s event is being done very differently because of the global pandemic, so rather than have a ceremony at noon, like we normally would, we did a private ceremony at 9 a.m. and we’re are going to post that online once we process that footage.” Mays went on to say that time slots were set up for people to make reservations to come out and place wreathes on the graves. “We’re trying to have different time slots through the day and so many people place so many wreathes on each time slot,” said Mays. “We received just under 11,000 wreathes from Wreathes Across America, which is wonderful, and so we’re trying to just kind of spread those out around through the cemetery with the different time slots. It’s a special way to honor veterans that are buried here at our national cemetery.”

Bill Arcuri, Chairman of the Board of Trustees for the Friends of Andersonville and a former POW in Vietnam, said that in normal years, a crowd of people would show up at 11 a.m. at the cemetery to see the ceremony at noon and then would go out and lay wreathes on the graves. “Usually, its done in a couple of hours,” said Arcuri.

Arcuri also added that every year, on the third Saturday of December, every national cemetery that participates in Wreathes Across America holds a ceremony at 12 p.m. simultaneously. Covington also stated that a year ago, over 15,000 wreathes were placed on the graves. “When I first started doing this, we laid out about 100 to 200 wreathes. It still took us a couple of hours,” said Covington. “The more we get, the more the people come.” Covington went on to say that this entire movement started with Arlington National Cemetery and that 250,000 wreathes will be placed on the graves at Arlington on Saturday, December 19.

For a few hours on Saturday afternoon, several volunteers placed wreathes on tombstones throughout the cemetery. While that was going on, one could hear the names of each and every veteran buried in Andersonville announced over the intercom system.

In total, there are approximately 20,400 graves at Andersonville National Cemetery. According to Mays, all of the approximately 10,971 wreathes that were given to the cemetery by WAA were placed on the tombstones by volunteers who wanted to pay honor and tribute to these veterans who faithfully served their country and, in many cases, gave their lives to keep this nation free.