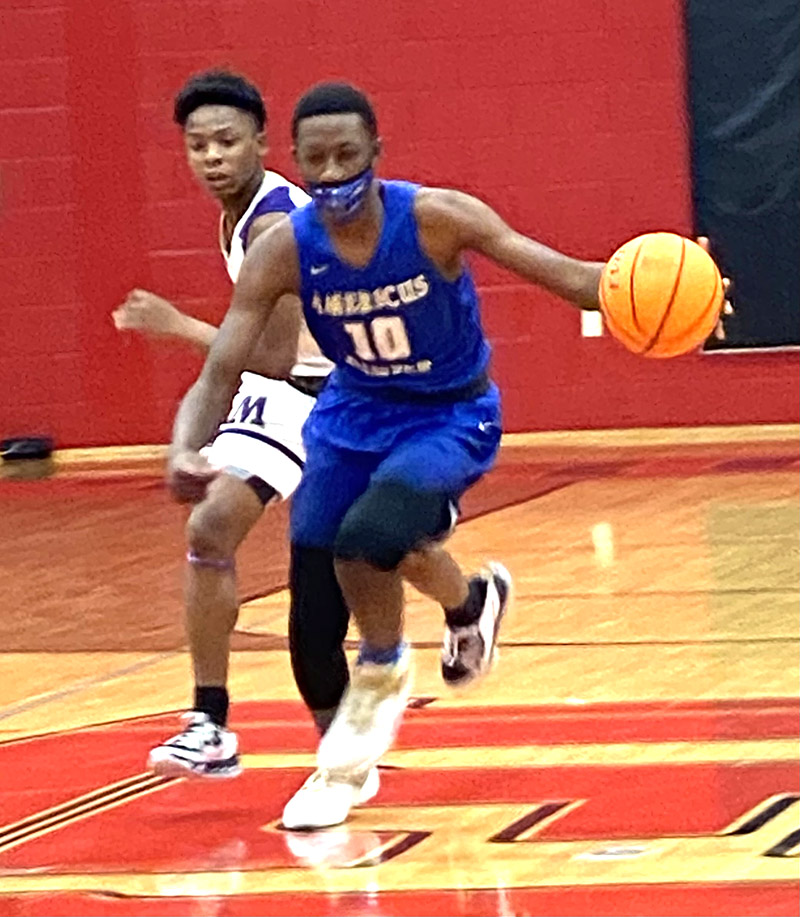 Americus-Sumter small forward Kyric Davis pushes the ball up the court against Marianna (FL) at the Lee County Round Ball Classic. Davis scored two points in the contest. Photo by Ken Gustafson

LEESBURG – After 14 days of being quarantined with no practices or games due to a player testing positive for COVID-19, the Americus-Sumter High School boys’ varsity basketball team (ASHS) was finally able to get back to the hardwood. On Wednesday, December 30, the Panthers made the 25-mile trip down U.S. Highway 19 to Leesburg to take on a strong Marianna High School team from Marianna, FL in the annual Lee County Round Ball Classic at Lee County High School. Unfortunately for ASHS, though they competed hard, the rust from the 14-day layoff showed up on the court and the Panthers fell to the MHS Bulldogs 55-45.

“Today was our first day back from the quarantine, so we haven’t had a practice in 14 days,” said ASHS Head Coach Johnny Genwright. “We did a shoot around this morning. We just came in to fill a spot to get some play in. I told the guys that we were fatigued and out of shape, but they still played. They still played hard. We wanted to see who was going to come out and just play. We need some guys to play hard and step up and I did see some guys come and play harder than they usually have been playing. Now, it’s time to get back to work.” 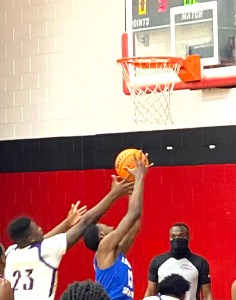 Americus-Sumter power forward Darion Mitchell goes up to try to score. Mitchell led the Panthers in scoring with 12 points against MHS.
Photo by Ken Gustafson

The Panthers trailed for almost the entire game against MHS, and while they worked hard to try to stay within striking distance of the Bulldogs, they struggled with turnovers, particularly during the second half. Those turnovers, along with the strong outside shooting from MHS, proved to be the difference in the game.

Darion Mitchell led ASHS in scoring with 12 points and Brandon Pope scored eight. Jordan Wiley poured in seven points and D.J. Hurley chipped in six in the losing cause. 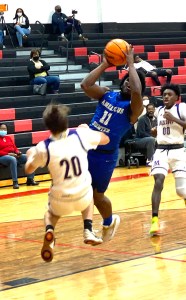 Americus-Sumter small forward Jordan Wiley drives to the basket against Trevor Medlin of Marianna. Wiley scored seven points in the loss to the Bulldogs.
Photo by Ken Gustafson

The Bulldogs jumped out to an 11-6 lead, but the Panthers responded with a free throw from Pope and a basket from Kyric Davis. However, MHS, thanks to a three-pointer and a two-point basket from Ahmad Johnson, jumped out to a 16-9 lead by the end of the first quarter.

During the first few minutes of the second quarter, the Bulldogs were able to maintain the lead and at one point, led 24-15. However, Pope was able to knock down a three-pointer, which ended up being the beginning of a 9-2 run by ASHS.  By halftime, the Panthers were back in the game, trailing 28-24. 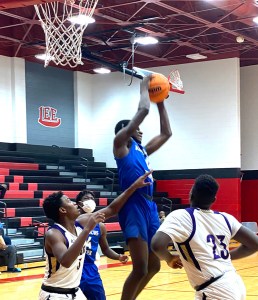 Mitchel and Keldrick Flemming each scored five points in the first half to lead ASHS, while Johnson led MHS with 18 first-half points, including three made shots from beyond the arc. Johnson ended up leading all scorers with 26 points in the contest, with 15 of them coming from five three-pointers.

During the first minute and a half of the third quarter, the Bulldogs stormed out of the gate by scoring eight unanswered points, prompting Genwright to call a timeout at the 5:30 mark. Out of the timeout, Hurley was able to knock down a three-pointer for ASHS, but the Panthers still trailed 37-27 with a little over four minutes to play in the quarter. During this period of the game, ASHS struggled against the half-court defense of the Bulldogs and committed a few turnovers. This enabled MHS to build its lead to 41-27 before Jordan Wiley scored on a put back for ASHS at the 2:37 mark of the third quarter. Wiley was then able to score another basket on the inside and was fouled on the play, but missed the free throw that would have completed the three-point play. By the end of the quarter, ASHS still trailed by double figures at 43-33. 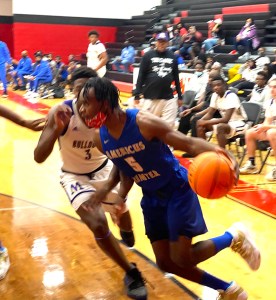 The Panthers scored four unanswered points to begin the final quarter, but the Bulldogs responded with three-pointers from Johnson and Nykeem Gainer to push their lead back up to 12 at 49-37.

ASHS scored five straight points to cut their deficit to 49-40, but that would be as close as they would get. The Bulldogs would go on to win 55-45.  With the loss, the Panthers drop to 3-2 on the season, while MHS improves to 9-3.

ASHS will return to the hardwood on Friday, January 8, when they travel up to Zebulon, GA for a Region 2-AAA contest against Pike County. Tip off is scheduled for 7:30 p.m.

ASHS will then continue Region 2-AAA play when they travel to Forsyth, GA to take on Mary Persons on Tuesday, January 12, at 7:30 p.m. This will be followed by another region game on the road against Central (Macon) on Friday, January 15, at 7:30 p.m. 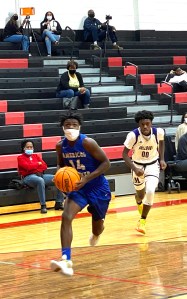 Americus-Sumter guard Ty’quan Robinson drives to the basket against Marianna. Robinson made one free throw in the ball game.
Photo by Ken Gustafson

The Panthers’ first home game in 2021 will be on Saturday, January 16, against Crisp County. Tip off for that game is scheduled for 7:30 p.m.