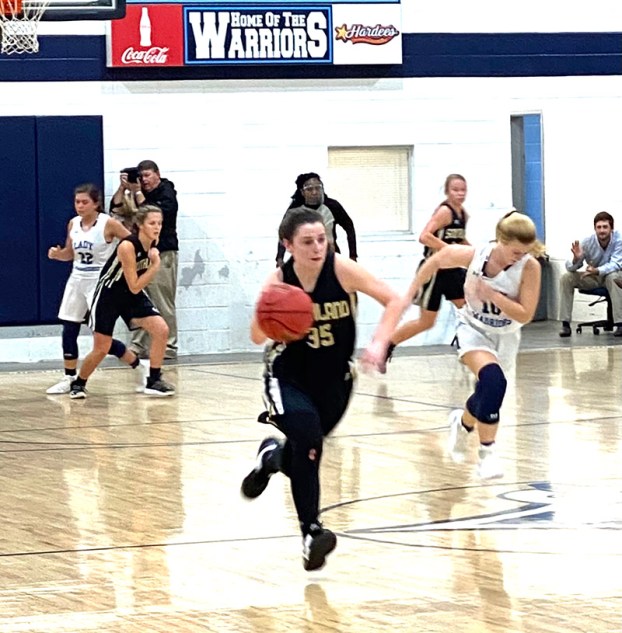 DAMASCUS, GA – The Southland Academy Lady Raiders (SAR) made the long road trip down to Early County on Thursday, January 7, and came away with a hard-fought 51-37 victory over the Lady Warriors of Southwest Georgia Academy (SGA).

It was a game in which some players who hadn’t logged a lot of minutes this year were called upon to make a difference due to the fact that three SAR starters;   Maddie Crisp, Haleigh Warren and Morgan Weaver, fouled out of the contest. However, Jadie Burrell and Katie Rogers were ready when called upon and according to SAR Head Coach Ty Kinslow, they responded to the challenge.

“We had three girls foul out. We tell everybody that it’s a team game and to always be ready,” said Kinslow. “We had some girls step up tonight who don’t get a lot of playing time and handled their pressure at the end. It was a great team win and I couldn’t be more proud.” 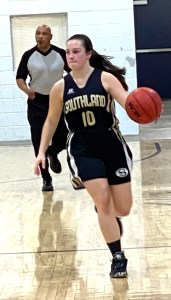 “They (SGA) do a very good job and they’re very long and athletic,” said Kinslow. “We just stayed under control and did a good job of moving the basketball and getting it to the open man.”

While he was happy with the win, Kinslow knows that there is a glaring weakness in the Lady Raiders’ game that needs to be fixed; offensive rebounding.

“We just got killed on the offensive glass,” said Kinslow. “They (SGA) did a great job and if we had blocked them out and gotten them off the offensive boards, then we would have put them away earlier.”

Riley Mitchell led the Lady Raiders with 15 points and Maddie Crisp poured in 11. Holly McCain scored eight and both Haleigh Warren and Morgan Weaver each scored six points in the winning cause.

After an evenly played first half, the Lady Raiders went into the locker at halftime leading 22-19. During the first few minutes of the third quarter, both teams traded baskets, but SAR took a 28-24 lead on two free throws from Crisp.

Throughout the third quarter, the Lady Warriors tried to press SAR full court, but for the most part, the Lady Raiders were able to break that press and jumped out to a 35-26 lead by the quarter’s end.

During the first two minutes of the fourth quarter, the Lady Raiders outscored SGA 5-2, but the Lady Warriors were able to cut SAR’s lead to 41-32 on a layup by Laurel Wilkerson.

SGA continued to press the Lady Raiders full court, but SAR was up to the task and continued to break that press. With about 2:30 to go in the game, SAR once again was able to break the SGA press and Crisp was able to score on a running one-hander to give SAR a 45-35 lead. 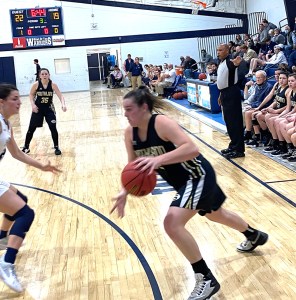 Being that SGA would continue pressing to force turnovers, it was imperative for SAR to not only keep breaking the Lady Warriors’ press, but to knock down foul shots down the stretch. McCain got fouled around the 2:00 mark and sank two free throws to give the Lady Raiders a 47-35 lead. Then with a little less than a minute to play, Jadie Burrell was fouled, but missed both foul shots. However, Burrell got her own rebound off her second miss and eventually Mitchell got the ball. Mitchell then got fouled and was able to make both free throws to help seal the victory.

With just a few seconds before the buzzer sounded to end the game, the Lady Raiders got the icing on the cake when Burrell scored a last-second layup to complete the 51-37 victory.

With the win, the Lady Raiders improve to 6-2 on the season, while SGA drops to 3-3.

Caroline Kirkland led the Lady Warriors in scoring with 14 points.

Up next for SAR is a home rematch against the Glenwood Gators from Phenix City, AL. on Saturday, January 9, at 4:30 p.m. In the first game between these two teams at the 2020 Border Wars Tournament in Phenix City back in December, the Lady Raiders fell by the score of 39-29.

The Lady Raiders will then host Westwood on Tuesday, January 12, at 6:30 p.m.

DAMASCUS, GA – The Southland Academy Raider Basketball Team (SAR) wasted no time in enforcing its will against the Warriors... read more