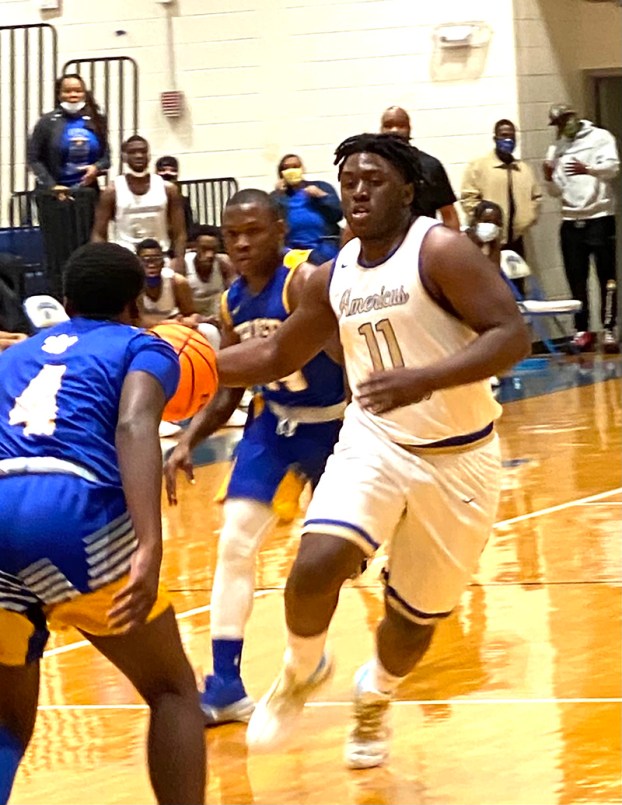 AMERICUS – After their 64-45 victory over Central (Macon) the night before, the Americus-Sumter Boys Varsity Basketball Team (ASHS) was hoping to continue their success in Region 2-AAA play on Saturday by earning a win over Crisp County (CCHS) in basketball’s version of the “Battle of the Flint”. However, the Cougars had plans of their own and in the first half, it seemed as if those plans might come to fruition. But the Cougars were playing an ASHS team that had been tested time and time again over the years. That experience showed up throughout the game, especially in the waning moments. With 20.7 seconds left, the Panthers were trailing 63-62, but sophomore guard Cameron Evans drove through the lane and was able to score on a running one hander to give ASHS a thrilling 64-63 victory over CCHS in front of a raucous crowd at the Panther Den that came to experience a game that was befitting a fierce, long-standing border war.

Being that both schools are now members of GHSA Region 2-AAA, the statement, ’It just means more’, couldn’t be truer.

“It was a very tough game. The guys came out lackadaisical,” said ASHS Head Coach Johnny Genwright. “I told them that they (CCHS) were going to be in a 1-3-1 full-court press. They made it tough. I have to give it to Crisp County. They’re a tough team. They play hard. But at the end, my guys handled adversity and we came through at the end to finish. I told them that we just have to keep playing and keep playing all the way until the buzzer sounds. They kept fighting and they kept fighting. We missed a lot of layups, but I just appreciate my guys for playing hard and keeping up the defense.”

Americus-Sumter forward Darion Mitchell goes up to score against Crisp County. Mitchell scored 16 points in the win over the Cougars.
Photo by Ken Gustafson

Both Jordan Wiley and Darion Mitchell came up big for the Panthers in this game, as they each led ASHS in scoring with 16 points. Keldrick Flemming was also in double figures with 13 points and both Evans and Kyric Davis chipped in six points in the winning cause.

While the ending of the game was a happy one for the Panthers, the first few minutes of the game proved to be anything but that. The Cougars jumped out to an 8-0 lead to begin the game and the Panthers finally got on the board when Davis drove to the basket and scored with a little more than four minutes left in the first quarter. 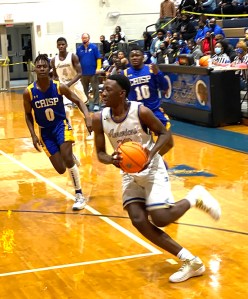 The Cougars continued to dominate during this period of play. They were able to jump out to a 13-4 lead on a three-pointer by Jordan McCray. During this period of the game, CCHS was beating the Panthers at their own game. They were implementing their 1-3-1 full-court press, forcing turnovers and scoring points off those turnovers. Coupled with that was the problem that the Panthers were having running their half-court offense when they did break the Cougars’ press. ASHS struggled to score from the perimeter and on the inside thanks in part to the aggressive defense being played by the Cougars. If there was a single play to sum up the first 14 minutes of the ball game, it happened when the Panthers failed to make an easy layup on the inside. The Cougars rebounded the basketball and through a long outlet pass to Cortez Thomas, who went in for a one-handed slam.

However, in spite of their struggles, the Panthers slowly began to make their way back into the game. With a little less than six minutes left in the first half, Jordan Wiley was able to score to bring ASHS back to within three points at 19-16. They had been down 17-8 at one time. 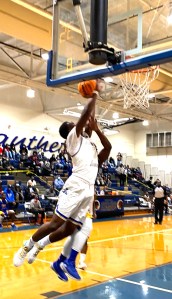 About a minute later, Keldrick Flemming made two free throws to bring the Panthers to within one. Then Wiley scored again on the dribble drive to give ASHS its first lead of the game at 20-19. That basket sent the ASHS fans into a frenzy and it was game on from there. The Panthers had come all the way back from their poor start to take a one-point lead.

However, just as it seemed that order was being restored, the Cougars went on a 14-5 run to take a 33-25 lead. By the time the horn sounded to end the first half, the Panthers found themselves trailing the Cougars 37-29.

However, the Cougars were facing a team with championship-caliber experience and that experience showed itself during the first four minutes of the third quarter. The Panthers went on a 7-2 run to begin the second half and only trailed 39-36. 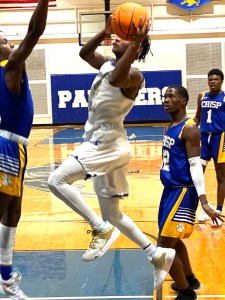 Americus-Sumter small forward Michael Johnson goes up to score against Crisp County. Johnson scored two points in the win over the Cougars.
Photo by Ken Gustafson

About two minutes later, Darion Mitchell was able to give ASHS a 42-41 lead when he scored on the inside. It appeared that for the remainder of the contest, it would be an exciting back-and-forth affair and it was.

With 1:31 to go in the third quarter, Thomas was fouled while shooting and made both free throws to give the Cougars the lead at 43-42. Jamarion Johnsons would later score to increase the CCHS lead to 45-42, but Mitchell responded with two free throws to pull the Panthers back to within one at 45-44 with 35.7 seconds left in the third. Then as the seconds ticked down to end the third quarter, ASHS guard Jawaski Whitehead drilled a three-pointer as the horn sounded to give the Panthers a 47-45 lead.

During the first five minutes of the final quarter, it was a back-and-forth affair between both teams, as one would expect in this rivalry. However, with a little over three minutes to play, Wiley stepped up again by driving to the basket and scoring to give ASHS a 58-55 lead. He would later score another basket to increase the ASHS lead to three at 60-57. Then with a little more than two minutes left, the Panthers got another steal and a basket from Mitchell to increase their lead to 62-57. At that point, CCHS called a timeout with 2:09 remaining.

Out of the timeout, the Cougars responded when Jamarion Johnson drilled a three-pointer to bring CCHS to within two at 62-60. The Cougars would later have a chance to tie the game when Thomas went to the foul line, but he could only make one of two free throws.

However, Johnson would later give the Cougars a 63-62 lead with two made foul shots. It would be up to someone on the ASHS team to come through in the clutch down the stretch.

With 38 seconds left in the game, the Panthers had the ball and trailed 63-62. They worked the ball around the perimeter to try and find the open man. Then with 20.7 seconds left, Cameron Evans drove into the lane and was able to loop a running one hander over the outstretched arms of Thomas that fell through the net. At that point, the Panther Den was a mad house, but there was still a little more than 20 seconds left for the Cougars to save themselves.

CCHS tried to get that winning bucket at the end, but it fell short and the Panthers would earn a hard-fought 64-63 victory.

Thomas led all scorers with 24 points and Johnson chipped in 13 points for CCHS in the losing cause.

With the win, ASHS improves its overall record to 7-2 and they are still undefeated in region play at 6-0. As for the Cougars, the loss drops them to 6-6 on the season and they are now 3-4 in the Region 2-AAA standings.

The Panthers will play Northside-Warner Robins in a Martin Luther King Jr. Day tournament on Monday, January 18, at 6 p.m. They will then resume region play on Tuesday, January 19, at Peach County in Fort Valley, GA. Tip off for that game is scheduled for 7:30 p.m.

The Panthers will see Crisp County again for the rematch in Cordele on Friday, January 29, at 7:30 p.m.